Sandip Roy’s documentary doesn’t go too deeply into Sinha's career, but it does touch upon the important aspects of his life and his enduring legacy.

“Every filmmaker or writer has a responsibility to society,” filmmaker Tapan Sinha comments at the beginning of Sandip Roy’s The King Of Middle Cinema (2010), calling himself a ‘committed humanist’.

The Dadasaheb Phalke awardee speaks to us a number of times in the documentary put together after his death in 2009. The forty-minute film, with a voice-over by Jagannath Guha and texts by Tagore read by Soumitra Chatterjee, both introduces the audience to the director and reinforces the connection of his fans with his enduring legacy.

“His place in the pantheon of Indian cinema is far greater than is suggested by the innumerable awards he has received,” Chatterjee intones. “His deep commitment to humanistic values, his poetic rendering of films and his dealing with the wide variety of content which compares favourably with the great Satyajit Ray, places him on a pedestal reserved only for the great.”

While assisting sound recordist Bani Dutta at New Theatres, Sinha learnt the essentials from the greats who inhabited the floors of the famous Kolkata studio. Later, in 1950, he went to London, England, to enhance his skills at the famous Pinewood Studios, from where came the strong 'Hollywood' influence on his early career.

In the documentary, Sinha credits the film Atithi (1965), based on a Rabindranath Tagore story, with bringing forth a big change in his career, allowing him to gain a global perspective and depicting a man as a man. The filmmaker adapted literary works numerous times in his career, including the seminal Chhabi Biswas-starrer Kabuliwala (1957), also from a Tagore short story.

Sinha was an admirer of Tagore’s, and often called him his guru. Roy discusses Sinha’s works — around 40 films in Hindi, Bengali and Odia which won several international and national awards — that dealt with everything from working-class characters to violence involving the common man. Like a master, he moved across genres and was one of the few to specifically make children’s films, including them in his audience.

The King Of Middle Cinema includes a host of names from Ashok Kumar, Shabana Azmi, Dilip Kumar, Chatterjee and Dilip Roy to producer RA Jalan who share their experiences of working with Sinha. The filmmaker worked with the late Dilip Kumar on his only Bengali film Sagina Mahato (1970), winning a slew of awards, while Chatterjee notes that after Ray, Sinha was the one who taught him to act for the screen. 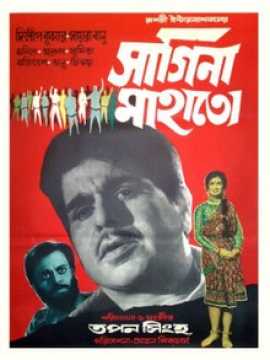 His son Dr Anindya Sinha details how his father’s mastery of music in his films brought them in further with specific songs and tunes he paired for his features.

Indeed, the filmmaker himself discussed his working style in the documentary, sharing his organized and collaborative methods on set, detailing how he prefers artistes to follow his specific instructions while acting.

Sinha, who wrote his Hindi screenplays himself, was a man of great curiosity and vision, and in the latter part of his life made a number of films for the Films Division as well. He carried the mantle of mainstream cinema but learnt from art cinema too.

Roy uses poignant texts of Tagore to emphasize Sinha’s deep relationship with cinema, lacing in emotional songs to hone the points. The majority of the footage belongs to Sinha’s important works and to his later association with the Films Division. The only complaint with the documentary is that it could have been longer, delving more into what made Sinha the king of middle cinema.

The King Of Middle Cinema was part of an online festival created by the Films Division, titled Masters’ Constellation, and held from 9–11 July 2021.

The 20-minute film successfully highlights the salience of the Kummatty (1979) director's style...