It's safe to say Imtiaz Ali is fixated on romantic relationships, on how they break apart and are repaired again. Most of the writer-director's filmography finds him working with similiar themes in films like Jab We Met (2007), Tamasha (2015), and, yes, Love Aaj Kal (2009). His latest film of the same name, Love Aaj Kal (2020), initially follows a similar pattern before deviating to its predictable end.

This is not to say that filmmakers can't remake their own films. Cecil B DeMille and Alfred Hitchcock, respectively, remade The Ten Commandments (1923) and The Man Who Knew Too Much (1934) because of technological advancements, while closer home, Sandeep Reddy Vanga remade his own Telugu film Arjun Reddy (2017) into Hindi with Kabir Singh (2019).

A decade later, Imtiaz Ali might have decided to revisit his earlier film, with a newer angle, and give a fresh spin on contemporary relationships. However, his attempt is unsucessful, to put it politely.

Zoe Chauhan (Sara Ali Khan) and Veer Taneja (Kartik Aaryan) meet at a club and are about to hook up when Veer hits pause on the rendezvous. He feels it is too soon, and the offended Zoe departs in a huff. He googles her, stalks her online a bit, and shows up at Mazi, a co-working space, where she practically lives. 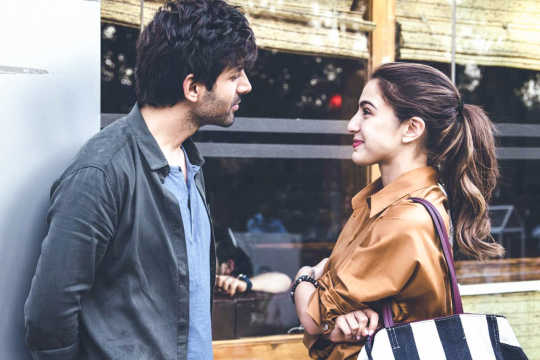 When she sees him across the room, Zoe confronts him and again Veer tries to calm her down. Thus begins their up-and-down relationship. Zoe is blunt, focused and career-centric; she has a plan for life and aims to stick by it. Veer is an idealist in all aspects of his life, be it work or relationships. The characters clash, fight and fall for each other messily.

While Veer sees it as a natural evolution of events, Zoe is horrified and detaches herself from him after a disastrous dinner with his parents where they fight in front of them. The editing of this sequence and its prior scenes feels rushed. Not helping matters in this situation is the owner of Mazi, entrepreneur Raj aka Raghuvendra (Randeep Hooda), who regales Zoe with stories of his past. Young Raghu (played by Kartik Aaryan again) falls for Leena (Arushi Sharma), who also resides in Udaipur like him.

Their awkward love story blossoms among friends and in school but when word spreads that they have secretly met, Leena is sent away to Delhi. An emboldened Raghu quits his medical studies and follows her. Zoe, who hears of Raj's romantic past and his current actions, is influenced to act upon matters in her own life.

Ali treats this back and forth of Zoe's internal issues with a work-life balance most confusingly. Kartik Aaryan's Veer is so besotted with Zoe, it seems, he would allow her to do almost anything, but she seems to have an innate fear that he will hamper her career plans. Moreover, Hooda's Raj and his constant interference in the lives of two youngsters seems a bit off.

The pace of Love Aaj Kal is slow, and it doesn't help the weak characterizations of Veer, Zoe and Raj/Raghu. Both Veer and Zoe bring up not wanting to be like their parents, but not much time is devoted to their actual issues. To add to the confusion, the post-interval portion begins with a bizarre rap song that gives us a flashback of kal (the past) with the falling apart of Zoe's parents' marriage, and aaj (now) of Veer's parents and their aloofness with each other.

But the biggest sin here is that we never fully connect with Zoe and Veer's love story and why we should root for them to be together.

Sara Ali Khan's Zoe is all over the place and just plain exhausting. The young actress also makes some pronounced acting choices that don't go over well. It doesn't help that in certain scenes, the camera moves in for a closeup at an odd angle, distorting our view of her. Hooda's character, like Rishi Kapoor's character in Love Aaj Kal (2009), is supposed to be a wiser, older confidant. But most of his 'teachings' make no sense.

Only Kartik Aaryan's lovelorn characters, both in the past and the present, are appealing. The actor is more subdued here than in his other films, and without the trademark monologue, more vulnerable too. It's a more mature leap for him. But some of his 'looks' as Raghu in the past just do not suit him. 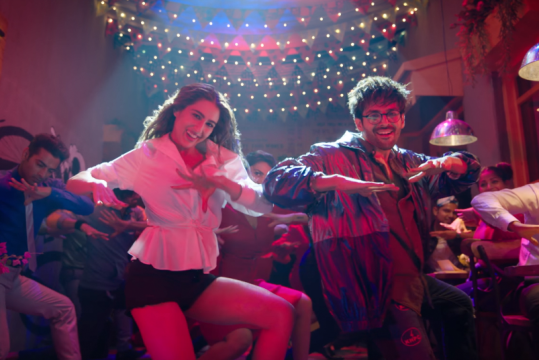 Pritam's music is again a winner with emotional numbers like 'Shayad', 'Mehrama' and the end credits crowdpleaser 'Haan Main Galat'. But I was disappointed the soundtrack reflects an entirely male perspective, when Khan's Zoe leads most of the story and the inner conflict of the film.

The film's production design, however, is extremely attractive, from the co-working space Mazi to the clubs that Zoe frequents. The wall artwork in certain scenes is striking, especially in this age of Instagram selfies. The Rajasthan portions, with its unabashed love for Qayamat Se Qayamat Tak (1988), has a lovely, nostaglic feel to it, largely due to the cinematography by Amit Roy.

I understand why Ali would be drawn to his previous film and want to tell it again, as the ways of love and romance have changed so dramatically with technology. But this mish-mash of ideas and sequences, sewn together with familiar locales and beautiful settings, just isn't enough. Funnily, a revisit of the 2009 film might just be the ticket with the winsome pair of Saif Ali Khan and Deepika Padukone and their fabulous chemistry.