Written and directed by M Gani, the Hindi film is a patchy yet heartbreaking look at the bleak class divide in modern India.

M Gani’s debut feature Matto Ki Saikil (Matto’s Bicycle) centers itself on a family man, Matto, who is a daily-wage labourer trying and failing to provide for his family. Seemingly inspired by Vittorio De Sica's Italian classic Bicycle Thieves (1948), the Hindi film examines how a mode of transportation is both the salvation and the end for the village man Matto.

Unlike the neorealist drama set over seven decades ago, the film falters a bit in its narrative as it sets up several narrative points, and is not able to properly solidify them. Matto Ki Saikil, which first premiered at the Busan International Film Festival in 2020, rests on the shoulders of Prakash Jha, who plays the titular character. He embodies every inch of the world-weary man who just can’t catch a break.

From the beginning, we see Matto tinkering away to fix his bike which has been falling apart for years. The only affordable way for him to commute to the city for work is through the bicycle. He lives with his wife Devika (Anita Choudhary), and daughters Neeraj (Aarohi Sharma) and Limka (Idhika Roy), in the village.

Their modest means of living is further impacted when Devika is hospitalized with kidney stones, which pushes the family further into debt. Matto is also worried about his daughters’ futures, especially since every prospective family openly hints at a dowry through gifts. 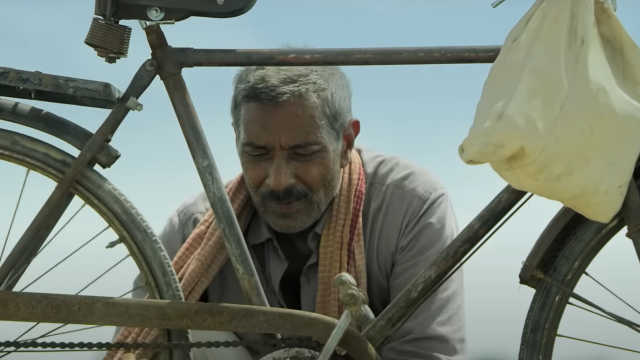 Another thread running through the film is politics. A former army man who is elected as their local politician, promises to take care of all inequalities and speaking of progress, including a highway through their village, but in terms of actual advances in their lives, it amounts to naught.

The bicycle becomes a metaphor for his lifelong struggle; it is but an extension of himself. At one point, Matto dreams of the promise of what life once held for himself and his family when he first got the bicycle two years. And all that’s left is a ruined vehicle for him to gaze at, much like his life.

The heartbreaking sentimental drama is well-intentioned, especially in highlighting the growing socio-economic inequalities between the urban and village spheres. Gani also nicely demonstrates the closeness of the small family, scrimping and scraping by daily.

Choudhary, Sharma and Roy easily slip into their roles. Dimpy Mishra as Kallu, the bicycle repairman and Matto’s only ally, is also good. But the film belongs to Jha, as he nearly breaks his back showing how Matto is burdened trying to make ends meet. His breakdown in the second half when two catastrophes befall his bicycle accurately displays the anguish and realization of his state of mind.

While Matto Ki Saikil is a sympathetic look at the working class, its storytelling and structure remains a bit patchy. The drama needed its plot to be better outlined, although the film is worth watching for Jha’s fitting portrayal.