The casting of Hrithik Roshan and Tiger Shroff works for the Siddharth Anand film.

Yash Raj Films’ Tiger Zinda Hai (2017) had impressed movie-goers with its action and stunt sequences as far as mainstream Hindi cinema is concerned. Irrespective of the rest of the content, the Salman Khan-starrer came close to international standards in this aspect at least. The production house has continued the same trend with its latest release War (2019), directed by Siddharth Anand.

The film has plenty of well-directed chase sequences, fights, gunplay and daredevilry. The exotic locations add to the visuals on the big screen. War is certainly the film for you if you are only looking for an action feast for over two and a half hours. If you are looking for more, however, do read on.

War revolves around two characters, Kabir (Hrithik Roshan) and Khalid (Tiger Shroff). Kabir is a dedicated senior intelligence officer who is ready to sacrifice his life for the country. Khalid, much younger, rises through the ranks and gets close to becoming an officer. But Kabir doesn’t trust him because of their past.

Ultimately, Kabir is convinced about Khalid’s capabilities and welcomes him on his team. Kabir then becomes Khalid’s guru and they, along with the rest of the team, go on a mission to save the country from danger.

However, one day Kabir turns rogue and, shockingly for Khalid, becomes a threat to the nation. Khalid is given the task of eliminating Kabir. Though Khalid agrees, he is also dying to know what forced Kabir to join the enemy. 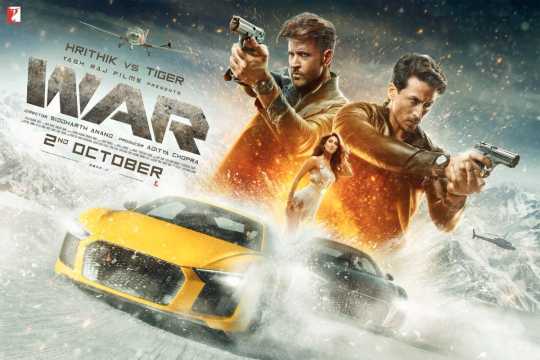 The plot and presentation of War reminds you of several Hollywood flicks, especially the Mission Impossible series. As far as Hindi films go, it brings back memories of YRF’s own Dhoom series and Tiger Zinda Hai.

You don’t mind this, of course, since what you are getting in return is non-stop entertainment for most of the film's runtime. More importantly, the narrative keeps you guessing despite having some idea about the plot from the trailers. The tight screenplay doesn’t give you time to breathe, except when the unnecessary song ‘Jai Jai Shivshankar’ is thrown in.

The casting of Hrithik and Shroff is perfect here. The two easily fit in the roles of guru and chela and, later, as antagonists. Both have shown their skills when it comes to fights and stunts. And when they are fighting each other, it is difficult to pick one. In terms of acting, Hrithik is slightly ahead though there seems to be some problem with his voice on a few occasions when he has to speak softly.

Ashutosh Rana, as expected from a seasoned actor like him, gives a fine act as the intelligence wing chief. From the small female cast, Anupriya Goenka (who also played a good part in Tiger Zinda Hai) gets maximum screen time and makes good use of it. Vaani Kapoor only has a cameo.

Like most masala action films, War, too, takes a lot of 'cinematic liberties', like the good guys with mere pistols defeating the bad guys with machine-guns. The narrative has some other questionable moments too. But you tend to overlook these because of the genre and the non-stop entertainment you get in return.

What really hurts War is the huge twist in the second half. Though it does take you by surprise, it is too far-fetched and silly, even by the standards of commercial Hindi cinema. It tries to be on the lines of the twist in Farhan Akhtar’s Don (2006), but that one was acceptable. Whatever happens after that point in War appears to be a stretch and you kind of start to lose interest.

What could have been a thrilling action film is reduced to a one-time watch for lovers of action.