Farhan Akhtar's physical transformation is laudable, but this Rakeysh Omprakash Mehra film takes too many detours.

It’s a story we’ve seen before in most sports films: a talented underdog struggles to prove his worth and silence naysayers, ultimately emerging victorious against all odds. Rakeysh Omprakash Mehra’s Toofaan (2021) follows this template and unfortunately doesn’t bring anything new to the table.

Dongri denizen Aziz Ali aka Ajju Bhai (Farhan Akhtar) is your typical low-ranking mob enforcer. He and his friend Munna (Hussain Dalal) get their hands dirty roughing up the debtors of their boss, the don Jaffer Bhai (Vijay Raaz). However, after meeting the virtuous Dr Ananya (Mrunal Thakur), who works at a local hospital, he decides to abandon the thug life and begins to pursue boxing, dedicating himself entirely to the sport.

As he immerses himself in the world of boxing, he approaches renowned coach Narayan ‘Nana’ Prabhu (Paresh Rawal), who questions his commitment and dismisses his abilities initially. But he later ends up in Aziz Ali's corner, training him to win the state championship. The newcomer then goes on a winning streak, earning the sobriquet Toofan [storm]. The first hour of the film sets up the origin story of an orphan from Dongri who becomes a champion. But then the narrative heads in another direction.

The Hindu Ananya and the Muslim Aziz, who are now a couple, face an uphill battle as they go against her family and society. Aziz loses his way, and his coach, and gets banned from boxing. The final arc of Toofan then begins as a washed-up Aziz has to reclaim his former glory and become a champion once again.

Mehra and the writers Anjum Rajabali and Vijay Maurya saddle the film with too many issues from bigotry to match-fixing. In the final half-hour, a vengeful former competitor of Ali’s, Dharmesh (Darshan Kumar), returns to play spoilsport. Mehra and his team throw a volley of curveballs at Akhtar’s Aziz, which he dodges with ease. The pacing and setup of the film are stacked in such a way, and we know he can’t eventually fail.

At 163 minutes, the length of the film makes it a slog and tracks like ‘Star Hai Tu’ don’t help, although some numbers like ‘Ananya’, which has been sung by Arijit Singh and composed by Shankar-Ehsaan-Loy, that are relegated to the background are just lovely. 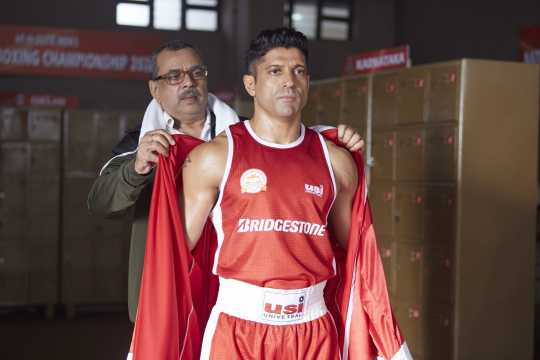 Akhtar, who is also co-producer, is utterly convincingly as the brutish Ajju Bhai who transforms into the pugilist Aziz Ali. The actor has two sets of gruelling training montages that serve to contrast in the nature of his struggle at the beginning as he works his way up the ladder and towards the final stretch when he is an out-of-shape older has-been. He gives it his all in his redemption arc, even though he looks older in the origin section of the feature.

Mrunal Thakur, once again as the supportive love interest, has a soothing presence onscreen. Rawal, as the grumpy coach and cold-hearted bigot, gets his own shot at redemption and he essays the role well. Toofaan has also strong supporting turns by Dalal as Aziz’s loyal sidekick, Supriya Pathak Kapur as a kind Catholic nurse and Dr Mohan Agashe as Nana’s best friend Bala.

Toofan has many links to Gully Boy (2019) which was also co-produced by Akhtar and featured dialogues and lyrics by Maurya and Javed Akhtar respectively; cinematographer, Jay Oza, who has shot both films, has once again captured an underprivileged underdog. Instead of rapping, however, this underdog’s skills extend to fighting.

Toofan will also remind viewers of other recent films such as Sultan (2016), Mukkabaaz (2018) and Bhaag Milkha Bhaag (2013), the latter of which is a Mehra-Akhtar collaboration, as they all borrow from the usual Hindi cinema tropes that edify sportspeople as heroes. However, while the tale of a rise and fall is redeemable, there is something missing from the final product.

Toofan, while sincere, tries to cram in too much, overcomplicating the saga of Aziz Ali.

Anvay Shinde’s film without dialogues portrays sexual predators and their hunger for prey....

14 hours ago — Dwijiri B Basumatary

Cinestaan Curates: Happy Birthday Mummyji is about finding some breathing space in a stifling life

The film has been written and directed by Shefali Shah...