T For Taj Mahal review: Lovely, earnest tale about how community and education can transform lives

The film, written by Ashish Aryan and director Kireet Khurana, leaves you with a warm, fuzzy feeling as you walk out of the theatre.

T For Taj Mahal opens with American civil rights activist Medgar Evers's famous quote, "You can kill a man, but you can't kill an idea." One man, Bansi Pal, and his revolutionary idea for his village of Bajjar, on the outskirts of Agra, is the basis for this uplifting fictional film, directed by Kireet Khurana.

Bansi, played by Subrat Dutta, has been harbouring a sense of guilt for a couple of decades. Because of an innocent mistake on his part as a seven-year-old almost 20 years ago, Bajjar has no school and therefore generations after him have grown up illiterate.

As Bansi watches his kid brother Nanhe playing outdoors instead of sitting in a classroom, he feels compelled to act. When he can find no teacher able to come and teach, Bansi decides to open a dhaba (wayside eatery) on the road to the Taj Mahal to help pay for an eventual school. Along the way, the dhaba becomes a pathway to an incredible social movement.

Bansi recruits Saneechar (Pitobash), a savvy former resident of Bajjar, and cook Nathuram (Manoj Pahwa) to help him run the place. One day, as he watches a young girl teach his brother, a brainwave strikes him. Why not ask people to donate their time and ask them to help educate the children of Bajjar?

Thus begins Bansi's battle as he goes up against his villagers and every naysayer who tells him time is more valuable than money. He finds kind strangers, Indians and foreigners alike, who teach the growing group of children (and later even adults) the basics of English, Hindi and various other subjects.

But no one is as helpful as Janet (Ali Faulkner), an American who comes to live at Bajjar and chalk out an educational programme for them to follow. Slowly, Bansi's pipedream becomes a reality, until it is threatened by a competing restaurant that can offer modern amenities but contains no heart like his Taj Mahal Dhaba. 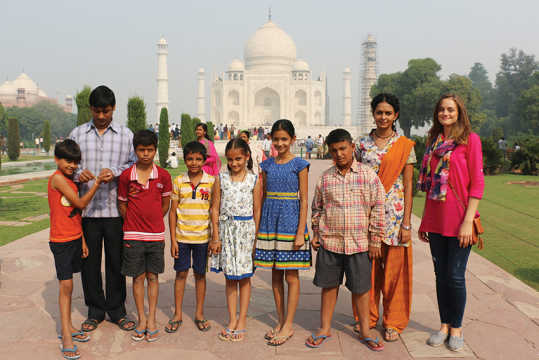 Writers Ashish Aryan and Khurana have layered the film with lovely little details and created memorable characters. Pitobash as the multi-lingual Saneechar is a delight, as is Manoj Pahwa as the surly cook with the heart of gold. The children of Bajjar, as they grow in confidence with their education, are wonderful to watch, along with the transformation of the village community.

The small cast of the film delivers on all notes; Dutta is especially effective as Bansi who constantly feels the burden of his mistake made as a child. Bidita Bag, as Nathuram's daughter Chuniya and Bansi's love interest, is convincing. There is even a cameo by actress Raveena Tandon Thadani as a customer at the dhaba.

The film has the right balance of emotion and humour, and the screenplay never lags at any moment, taking us along on the journey with Bansi, experiencing both highs and lows. Advait Nemlekar's score, too, kicks in at the right moments, reminding us what's at stake.

Khurana knows where to keep the focus in the film and even when things look bad, you know they will eventually fall into place. T For Taj Mahal is a story narrated to us by Janet, and she comes in and out of the narrative, leaving us to wonder about certain lingering plot points involving her.

But on the whole, T For Taj Mahal feels as though if it were a fairytale, so steeped in goodness and hope it is. But in this dark, often chaotic, world we live in now, is that really a bad thing? We could use more of this goodness and hope all around.

T For Taj Mahal was screened at the 10th Jagran Film Festival in Mumbai on 26 September.