Produced and directed by Ajay Devgn, the feature feels divided into two separate halves, a thrilling action drama and a showy investigative saga.

In his third feature as director, actor-producer Ajay Devgn is once again in front of the camera. He plays Captain Vikrant Khanna, an extremely self-possessed senior pilot, whose routine flight from Dubai to Cochin leads to an investigation after a risky landing in bad weather.

Devgn gives us enough background into the composed Vikrant, who has a photographic memory, that even a night of partying before he is due to fly back doesn’t affect him much. Joining him on the flight back to India is his first officer Tanya Albuquerque (Rakul Preet Singh), who is less experienced but admires him nevertheless.

With inclement weather and an approaching cyclone, Skyline Airline’s Flight 377 has to make a decision as it becomes impossible to land in Cochin. With Bengaluru and Trivandrum as the two options, a choice is made to land at the latter, which has repercussions later. The nervy Vikrant steadies a shaky Tanya and assures his passengers that he will get them safely on the ground.

With the airplane running out of fuel the longer it stays in the air, the pilots have no choice but to land somewhere, soon. Vikrant takes a call and makes a heroic landing. But almost immediately, the investigations by different agencies begin. 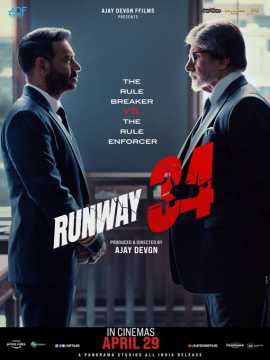 The second half of the film belongs to the gruelling investigation into the decisions taken by Vikrant and Tanya by Narayan Vedant (Amitabh Bachchan), who leads the Aircraft Accident Investigation Bureau (AAIB). He seems convinced the arrogant pilot could have caused more damage and wants to make an example out of him.

Here more characters are introduced, including Boman Irani as the owner of the airline, who is awaiting a costly merger, and his fixer Radhika Roy (Angira Dhar), who doesn’t want to implicate the airline in any mess. Despite Vedant’s tactics at character assassination and his attempts to grind down both pilots, Vikrant remains unflappable.

They are both men of exacting methods, their own, and pitted against each other, one has to blink. Bachchan’s thunderous performance reminds one of his recent turns in Chehre (2021) and Badla (2019), where he seems to want to get to the heart of the matter. Rakul Preet as the more inexperienced junior and Aakanksha Singh as Vikrant's wife are reduced to lacklustre supporting characters. The jokes on Tanya's last name grow old fast as well. 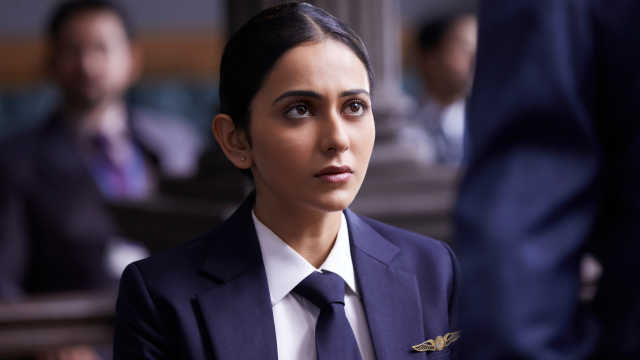 Devgn, as Vikrant, is running the whole show, both as actor and director. He spends 80% of the film smoking a cigarette and plays Vikrant as the stoic hero, rarely showing emotion. It works in fits and starts, like the film itself.

Runway 34 is set in 2015 and inspired by a set of real events, but the story by Sandeep Kewlani has too many similarities (and plot points) with Hollywood features Flight (2012) and Sully (2016). Both were star vehicles for their leading men.

However, Runway 34 feels divided into two separate halves — a thrilling action drama and a showy investigative saga. The tonal shift after the first half is too much to overcome. If you have seen Flight or Sully, one can almost guess what’s coming next.

The production design in the second half feels too ostentatious as well. Every office, every home, every room is grand in scale and without a single note of realism. The film begins to behave like a stage play, especially due to the dialogues by Kewlani and Aamil Keyan Khan, moving away from the tension and drama of the first half, which felt more believable, despite its clichés.

In the second half, though, the tight close-ups, in an indoor setting rather than the cockpit, feel out of place as well. Runway 34, despite the talent involved, feels sorely lacking, once it moves away from the skies and lands back on the ground.

Runway 34 is being released in theatres today.