Inspired by the short stories of Satyajit Ray, filmmakers Srijit Mukherji, Abhishek Chaubey and Vasan Bala come together to tell captivating tales of flawed men and their inner turmoil.

Ray, created by Sayantan Mukherjee, uses the talents of filmmakers Srijit Mukherji, Abhishek Chaubey and Vasan Bala to be inspired by the Bengali filmmaker and retell four of his stories in their own ways. Each episode opens with a creative title sequence design animated by Improper Design + Animation and scored by Peter Cat Recording, which is a nice nod to Ray’s own work as visualizer and illustrator.

In Forget Me Not, Ali Fazal is the smooth-talking, intelligent entrepreneur Ipsit Rama Nair, a man with a mind like a computer. The suave businessman seemingly has it all, the on-the-rise company, a beautiful wife and baby daughter, and a bright future. But when the beautiful Rhea (Anindita Bose) comes up to him one night, reminding him of a rendezvous in Aurangabad, Ipsit is at a loss. He simply can’t recall her or their time together. 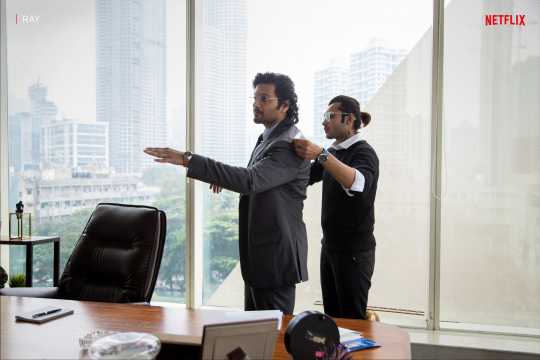 The meeting rattles him and he slowly begins to doubt himself and his past actions. He is jittery, has nightmares, and his carefully built life slowly unravels as he has a complete breakdown. Mukherji and writer Siraj Ahmed take the short story Bipin Chowdhury-R Smritibhrom (Bipin Chowdhury’s Memory Loss) and turn it into the downfall of a powerful, arrogant man.

Mukherji’s second segment Bahrupiya is adapted from the short story Bahurupi. Kay Kay Menon is the simple, caring Indrashish Shah who is often ignored and treated badly by others. After his beloved grandmother dies of cancer, Indrashish is bequeathed plenty of money and her precious book on make-up.

Using the book as a guide, he transforms himself, taking on new identities and faces. At first, he does it just for the thrill, but when he loses the woman he loves, Debashree (Bidita Bag), and is in danger of losing his job, he uses his abilities for revenge.

Enthralled by the power he holds, he decides to disguise himself once again to fool the all-knowing Peer Baba (Dibyendu Bhattacharyya), who can read faces. However, wanting to show him up, he underestimates him and is trapped in a situation from where there is no exit.

Both of Mukherji’s tales feature men who let their pride get the better of themselves. Ipsit and Indrashish, who are at opposite ends of the spectrum, believe they are too big to fail and treat others badly in the process. Like Icarus, they fly too high and get burnt, badly. 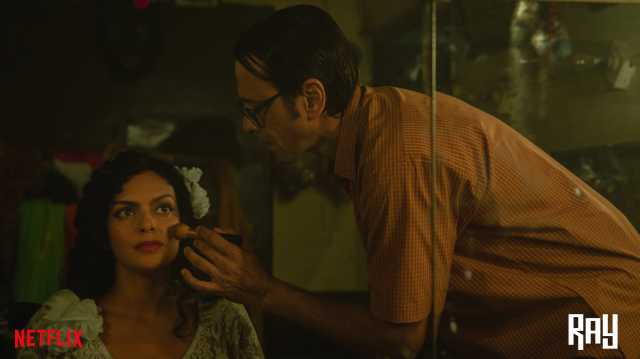 Fazal and Menon bring you in as they slowly succumb to the inevitable madness, and both stories are filled with a solid cast of artistes, from Shweta Basu Prasad to Rajesh Sharma. Bhattacharyya as the omniscient Peer Baba is impactful with limited screen time.

The production design in Bahrupiya, using the setting of Kolkata, is impressive, and the story’s frequent use of mirrors is again a reference to Ray’s use of reflections in his own filmography. Bahrupiya also uses prosthetics and make-up to transform Menon into others, but it remains only convincing the first time.

Keen viewers of Forget Me Not may pick up on the hints the makers drop along the way. I, for one, was waiting for the other shoe to drop once the story started, and as it wound down, was not disappointed in the reveal.

Abhishek Chaubey’s delightful Hungama Hai Kyon Barpa (Why The Chaos, Friends?) has been inspired by Barin Bhowmik-er Byaram (Barin Bhowmick's Ailment) and involves a chance reunion of two strangers. Musafir Ali (Manoj Bajpayee), renowned ghazal singer, is on his way to Delhi from Bhopal by train. His cabin mate, Aslam Baig (Gajraj Rao), a garrulous, friendly man, feels awfully familiar. They both feel as if they have met before.

As the train chugs along, Musafir realizes with a start how they know each. A decade ago, when he was a nobody, they were travelling in similar circumstances and Musafir ended up stealing Baig’s prized possession, his pocket watch Khusbakht. 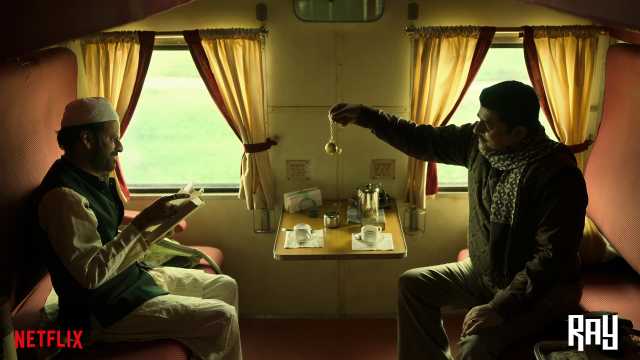 His conscience pricked, Musafir feels compelled to return it as the watch has brought about a change of luck for him, and seemingly depleted Baig’s. But since the man doesn’t remember him as the thief, can he actually get away with it?

Written by Niren Bhatt, the Urdu dialogues are both amusing and enjoyable. Both Bajpayee and Rao are perfectly cast and their scenes together are fabulous. Raghubir Yadav and Manoj Pahwa are splendid in small but key roles.

Using the backdrop of Urdu poetry, Chaubey add a theatrical dash to the tale as Musafir moves through Hungama Hai Kyon Barpa as a performer for his engaged audience. These pieces work enormously well, and reminded me of a reader’s imagination while engrossed in a tale. This segment also includes a clever little Easter egg to Ray’s short stories, that is nicely incorporated.

The final story in the series is Spotlight, directed by Vasan Bala, the only one that begins with a quote by Ray. Adapted from the short story of the same name, Spotlight revolves around spoilt movie star Vik Arora who fears he has lost his mojo. At a luxurious hotel for a movie shoot, Vik is aghast to discover someone else whose celebrity eclipses his own.

The young film star is thrown out of his room by Didi (Radhika Madan), the young 'god woman' who performs miracles. Vik throws tantrum after tantrum, almost getting kicked off the film, until he meets the elusive Didi, who ends up performing a miracle for him after all, after they have a heart-to-heart conversation. 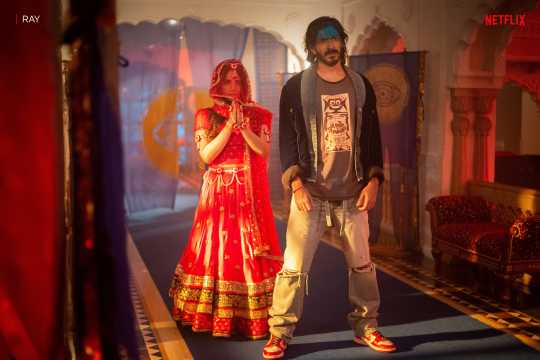 Vasan’s segment is the only one that has a significant part for a woman. Madan plays the omnipotent Didi as a rebel in disguise. Harshvardhan Kapoor plays the role of the whiny movie star a little too well as he finds himself at a crossroads in his career. Chandan Roy Sanyal seems to be enjoying himself playing his handler, Roby.

Spotlight contains Vasan Bala's trademark sly humour here and there, including with plenty of filmi references (Rajeev Masand has a cameo as a supercilious critic). Vasan and his writer Niren Bhatt both also have cameos, respectively, as a director and producer on Vik’s fictional film Chiriyaghar. Vik and Didi, trapped by their auras of celebrity, become the only ones who understand each other; however, the ending feels a bit too convenient.

All three makers have taken the frameworks of Ray’s stories and made them their own. What follows is ambitious storytelling which pays homage to Ray and also honours him. The Bengali filmmaker wrote several such stories in his lifetime and another season of this would be wonderful, but let’s include the women this time?

Ray is now available on Netflix.