The dramedy, directed by Rajshree Ojha, has a likeable ensemble cast, but the emotions fail to connect the way the series may have hoped for.

The family that eats together, stays together! That’s seems to be the mantra of patriarch Govind Shastri (Jatin Sial) assembling his errant but large brood for weekly potluck lunches. After a brush with his health, the head of the Shastri family becomes obsessed with spending time with them and inserting himself into the lives of his three children.

Eldest son Vikrant (Cyrus Sahukar) has growing pains with three young children — daughter Zia and twins Naksh and Saisha. He and his wife Akanksha (Ira Dubey) hope to move to roomier digs, but they aren’t sure they can afford one in their limited budget.

Middle son Dhruv (Harman Singha) seems the most sorted as he is married to his childhood sweetheart Nidhi (Salonie Khanna), but he is really a people-pleaser, especially in the family. Youngest sibling and only daughter Prerna (Shikha Talsania) has moved back home from Kolkata after her father fell ill.

Pammi Shastri (Kitu Gidwani), the long-suffering matriarch and partner of Govind, grows tired of her husband’s plans at family bonding after his retirement, but she doesn’t mind chiding her children and daughters-in-law about their personal choices. The potluck lunches become a way for the family to sort out their problems, with the help and/or hindrance of family members. 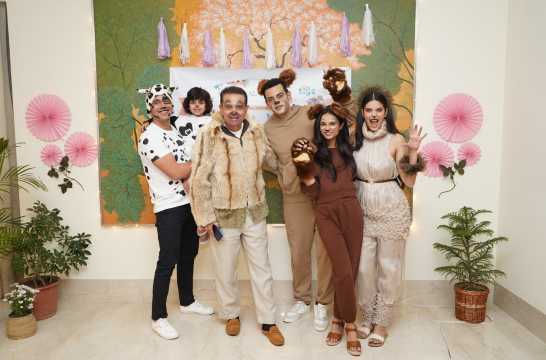 In one episode, Prerna’s new boyfriend Aalim (Siddhant Karnick) is both welcomed and grilled at the family get-together, while in another, Govind, who clearly has too much time on his hands, livestreams meetings with his children for his YouTube channels. There are no boundaries in the Shastri parivar.

Most of the weighty issues like family secrets and sibling rivalry are diffused by feel-good moments. Written by Ashwin Lakshmi Narayan and Gaurav Lulla, the dramedy is more a sitcom fantasy of a family.

The Shastris are wealthy and privileged and it’s hard to relate to their problems. Their homes resemble tastefully done-up hotel rooms, with nary a mess in any of them, and their issues are neatly resolved by the end of each episode. The conflicts in the script feel superficial.

The eight-episode series has moments of humour, especially with the generational gap between parents and children, and the constant guilt trips among them. Despite the storyline picking up from the fourth episode, there was more material to mine in this family saga, which gets left unexplored. The resolution of the series turns sentimental by the end.

The cast gel well as a family who have known each other for ages and the siblings — Sahukar, Singha and Talsania — have a natural bond. Despite the squabbles, this family really loves its members. Turn to the Shastris only if you are bored of your own family.

Potluck is now available on SonyLIV.