Written by Sudip Sharma and directed by Avinash Arun and Prosit Roy, the nine-part Amazon Prime Video web-series is exciting as well as thought-provoking.

The rise of OTT (over-the-top) platforms in the past few years has given us quite a few dark thrillers that have some connection with Indian mythology. The two seasons of Sacred Games and single season (so far) of Asur are prime examples. Paatal Lok has not only continued this trend, but has also emerged as the most interesting combo of the two elements.

Having a mythology angle doesn’t mean the web-series would be difficult to comprehend for those who are not conversant with the subject. The makers have presented ancient legends in the simplest of manners in connection with the dark crime thriller taking place in modern-day Delhi.

Directed by Avinash Arun and Prosit Roy, the web-series starts with police inspector Hathi Ram Chaudhary (Jaideep Ahlawat) explaining to his junior officer Imran Ansari (Ishwak Singh) the differences in swarg lok (heaven), dharti lok (earth) and pataal lok in Indian mythology. According to him, the first is the place where the ultra rich live. The middle class and upper middle class occupy the second level. The third level, pataal lok or purgatory, is the lowly place across the Yamuna where their police station is located.

Chaudhary has been in the police force for 15 years but has never handled a high-profile case. He gets one by sheer chance when four youngsters, Vishal Tyagi aka Hathoda Tyagi (Abhishek Banerjee), Tope Singh aka Chaaku (Jagjeet Sandhu), Mary Lynngdoh (Mairembam Ronaldo Singh) and Kabir M (Asif Khan) are held by the police with weapons.

Further inquiry reveals that they had discreetly arrived in the city to kill famous television journalist and anchor Sanjeev Mehra (Neeraj Kabi). The biggest question is why they didn’t kill him when they had the chance.

Mehra, meanwhile, is having serious problems with the management of his organization. He has been blamed for the low popularity ratings of the channel and asked to quit. Mehra, however, is in no mood to obey.

Chaudhary has a hard time getting info out of the four suspects. He is also pitted against foes from his own force. But he is hell-bent in solving this case as he has never had such an opportunity before. He has an able supporter and subordinate in Ansari.

The story has several layers that are not only appealing, but also enter deep into the lives of these street toughs and explain how they became such in the first place. The subplots of all the major characters are kept successfully intertwined throughout the runtime of the web-series.

Sudip Sharma, the screenwriter, is the real star here. He has created a pacy narrative that regularly throws elements like surprise, shock, deep thinking, dark humour and, surprisingly, some healing, too, towards the end.

He has exposed the dark underbelly of the police force, the political class as well as the media. At the same time, the content shows the mirror to educated and uneducated Indians for normalizing communal, castiest and stereotypical thoughts. Indeed, it subtly proves that all three loks are the same in the era of Kalyug.

Paatal Lok has not been shot in beautiful locations. But the visuals are a treat when seen through the lens of cinematographers Avinash Arun and Saurabh Goswami.

The revelation in the end and its consequences take you completely by surprise. In fact, Paatal Lok is one rare investigation thriller that has provided a satisfying final episode. Otherwise, this aspect has been a problem with a few other recent investigation web-series like the second season of Sacred Games, The Family Man, Special Ops and Asur.

This does not mean Paatal Lok is perfect. For one, the show could have been much shorter by trimming down some subplots that don’t have a direct impact on the main story, like the part about Chaudhary’s disobedient son. There is also a period at the end when you are compelled to revisit the political angle to grasp it properly. But those are quibbles.

Paatal Lok is laced with fine performances by an ensemble cast. Jaideep Ahlawat, bagging a lead character for the first time, has latched on to that opportunity the way a sharp outfielder would latch on to a scorching catch, indeed just the way his character grabs his first big case. You can’t help but applaud when he finishes the journey of his character that sees him pass through various zones. 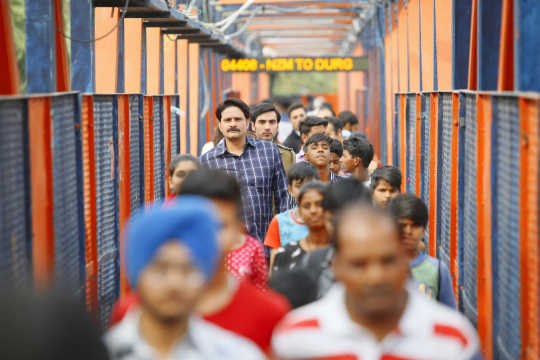 Neeraj Kabi is first-rate. You do feel for his character, but at the same time he makes you think otherwise with his manipulative ways, all with natural ease. Abhishek Banerjee is terror personified. There is every chance you will be scared out of your wits when you spot his face next. Niharika Lyra Dutt provides a natural act as a cunning and seasoned TV journalist.

The Disney+ Hotstar series explores the murky world of big pharma and its unethical practices by...

Transistor review: Touching short about young love in the time of mass sterilization

Dinesh S Yadav continues the story first introduced in the Sanjay Mishra-starrer Turtle, but the no...