The medical web-series, created by Nikkhil Advani, makes a bumpy start but corrects itself in the second half with heroic portrayals of selfless service.

A fictional medical hospital, Bombay General (a stand-in for the Cama and Albless hospital), is at the heart of the latest Amazon Prime web-series Mumbai Diaries 26/11 (2021). Revolving around the deadly terrorist attacks that took place at prominent locations in South Mumbai, the medical drama focuses on the personnel stationed in the hospital who deal with saving the victims and trying to stay alive at the same time.

Seen through the eyes of a number of characters — the head of trauma surgery Dr Kaushik Oberoi (Mohit Raina), social service director Chitra Das (Konkona Sensharma), trainee doctors Ahaan Mirza (Satyajeet Dubey), Sujata Ajwale (Mrunmayee Deshpande) and Diya Parekh (Natasha Bharadwaj) and many others — the series puts together a dramatized version of events from that harrowing day in 2008.

Besides the doctors and patients, we see the Mumbai police’s response to the attack, before the big guns are brought in. The action shifts a little to another location, the Palace Hotel (standing in for Colaba’s Taj Mahal hotel), where Diya’s parents (Indraneel Bhattacharya and Sonali Sachdev) are attending an event supervised by Dr Oberoi's wife Ananya Ghosh (Tina Ghosh). They, too, get caught up in the melee as the terrorists attack the hotel.

Back at Bombay General, the overburdened government hospital is straining at the seams when the casualties from the attacks start pouring in, including one of their own, nurse Anju (Thavran Princy Sudhakar). Already frayed with internal politics (Dr Oberoi is leaving the hospital), the staff quickly gets over its shock and begins to treat the injured. 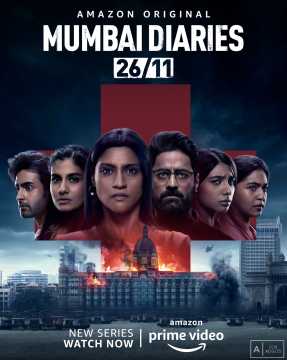 The drama and tension moves to another level once Anti-Terrorist Squad chief Hemant Kelkar (Saurabh Sharma) and officer Vijay Sawarkar (Amit Jaiswal) are brought in severely injured, along with the terrorists. The hospital, especially Dr Oberoi, gets in the eye of the storm for treating the terrorists.

The media frenzy surrounding the events builds as a repugnant journalist Mansi (Shreya Dhanwanthary) breaks all ethics and rules just to get the scoop of the night. While her character is the worst of the lot, as the media are largely portrayed as vultures, there are others who show their true colours as the night progresses.

The hospital has to go from treating its patients to protecting them when they become the targets as the terrorists arrive, and once again it is up to the real heroes, the medical personnel, to show their mettle and valour in the face of intense fire.

The early episodes of the eight-part series set up the story by introducing us to each character one by one, including their emotional baggage, which becomes a factor in their decisions on the day. The screenplay by Nikhil Gonsalves (who also directs with Advani), Anushka Mehrotra and Yash Chhetija, and dialogues by Sanyuktha Chawla Shaikh, are a bit heavy-handed, leaving little to the imagination. 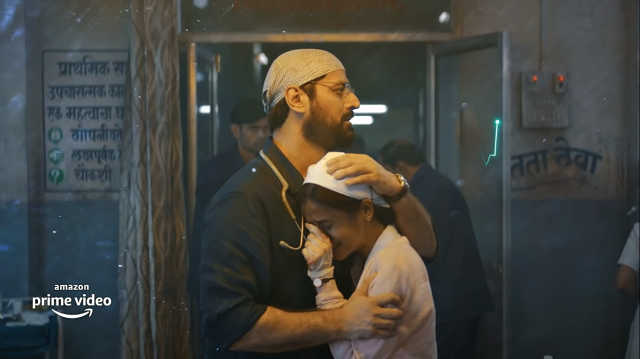 Every cliché is embraced. Diya is the rich kid benefiting from nepotism, Kaushik Oberoi is the workaholic doctor with a troubled marriage, and Ahaan is the ‘good Muslim’ to counterbalance the terrorists. Of course, the trainee doctors on their first day have their internal competitiveness, and then there are the stereotypes that come up. An arrogant police officer refuses to get treatment from Sujata because of her caste, a nurse doubts Ahaan’s abilities because of his faith, and so on.

But when the stakes are impossibly high, the series rights itself, as the makers tap into unbridled emotion. Hot-headed ACP Tawde (a terrific Sandesh Kulkarni) goes from antagonist to partner in crime, protecting his city at all costs. Ananya is the consummate professional, never abandoning her guests, because it is the right thing to do.

Even the trainee doctors and medical staff continue to serve their patients despite their own personal crises. The series, whose aim was to highlight these frontline workers, really hits home, especially in the final two episodes. In light of the current pandemic, this recognition is well deserved.

Initially, the staging of the scenes, in the sprawling, inter-connected set, feels like a play. Throughout the series, there are several long takes and the action is mostly shot with handheld cameras to get the gritty feel of being alongside the characters. 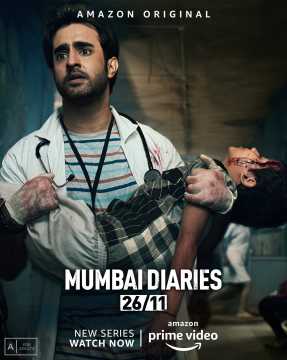 A few of the production values feel less than authentic (especially in a scene where the ceiling caves in), but the use of old Nokias, Blackberrys and iPhones serve as reminders of the period. The sound design and action serve to both chill and shock as the events unfold over the episodes.

The ensemble cast all have their moments. Raina is most effective in Dr Oberoi’s quieter moments, while each of the young residents played by Deshpande, Bharadwaj and Dubey grows stronger as the show progresses. The ever reliable Sensharma as the empathic Chitra Das even has a poignant moment with one of the terrorists that shows how young they actually were.

Mumbai Diaries 26/11 arrives with a lot of expectations and while the payoff arrives a bit late, the series, which dredges up many painful memories of the day, is laudable in attempting to pay tribute to some of the heroes of that terrible time.

Writer-director Sandeep Mohan yet again brings us an interesting tale about ordinary city-dwellers....