The film features three tracks that are poles apart but have a common point in the form of the current socio-political scenario.

Let’s face it. India's socio-political scenario has been going through some turbulence over the past few years. The divisive lines in the country, which have existed for ages, are being seen more clearly now. The war of supremacy between ‘us’ and ‘them’ has resulted in scores of incidents of violence.

In such a bloodthirsty atmosphere, it is the minority section of the population that faces the maximum flak, especially if troublemakers from the majority have nothing to fear.

Then there is a potter who keeps sharing tales of Ram with his donkey, irrespective of how the animal responds. Lastly, the film features the lives of a group of people called Ramnamis. They are devotees of Ram from tribal areas. They have unusual methods of worshipping the lord, which includes tattooing his name all over their bodies. 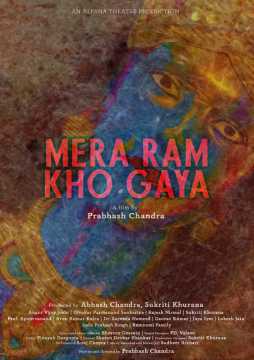 The three tracks appear poles apart from one another but they have a common point in the current scenario. The people in each track are affected by the divisive nature of politics. Sahir faces threats from fringe elements for his articles. The potter indirectly points out the hypocrisy of those who are using Ram's name for their political gain. The Ramnamis speak about their resistance and perseverance against orthodox Hindus.

As far as performances are concerned, Khurana and Joshi are good finds. They had to be absolutely natural because of the nature of the film and they are just that. The actor playing the Dalit painter and research scholar is also impressive. The actor playing the potter shows dedication and level-headedness while dealing with the animal in every scene of his.

The Ramnamis in the film are real and not actors, but they are calm and confident while explaining their lifestyle and beliefs in interviews.

The linking of one story to another is done smoothly for most of the film. But later the focus starts to waver and the narrative begins to drag. In other words, the film doesn’t have the same grip on the viewer in the second half as it did in the first. Hence, the runtime of close to two hours appears overlong.

Mera Ram Kho Gaya should be lauded for fearlessly speaking out against fascism. But the film doesn’t go all out. For example, we have characters speaking about atrocities on Dalits, the misuse of the slogan ‘Bharat Mata ki jai’ and the curtailment of press freedom by hooligans, but that’s about it. The film doesn’t delve deeper into these problems.

In the end, Mera Ram Kho Gaya keeps oscillating between documentary and fiction. Sticking to one genre might have been a better idea.

Mera Ram Kho Gaya was screened at the 10th Jagran Film Festival in Mumbai on 29 September.

The short animation film is available for viewing for a limited period only courtesy the Film...

The film, starring Vidya Balan, was premiered on YouTube as part of the We Are One global film...

Directed by Ritam Srivastav, the crime show is based in Uttar Pradesh's Purvanchal region in the...