Marjaavaan review: The film doesn't even reach the height of Riteish Deshmukh’s character

Marjaavaan, starring Sidharth Malhotra, Tara Sutaria and Riteish Deshmukh, is aimed at the masses but simply fails to entertain.

The story of director Milap Zaveri’s Marjaavaan is set in 21st century Mumbai, but you would be hard put to believe that. The basti (locality) portrayed in the movie is an utterly lawless place that could just as well have been the location of Anurag Kashyap's magnum opus Gangs Of Wasseypur (2012), a place where gangsters rule the roost and law and justice are nowhere to be found.

Anna (Nassar) is the ganglord here. He runs a water-tanker mafia and has made a fortune from it. For some unfathomable reason, he mostly operates from an under-construction building. He worships a few dozen automatic rifles in public glare on Dussehra and nobody finds it unusual or worrying.

It also appears that Anna suffers from multiple personality disorder. He once orders someone to take a drastic step but starts getting emotional about it soon after. He fluctuates between strict and emotional throughout the film. Versatile don, eh?

Anna’s evil son Vishnu (Riteish Deshmukh), a dwarf, goes around portraying himself as the successor to his father. But Anna places his man Friday Raghu (Sidharth Malhotra) above Vishnu because of his loyalty and dedication. Hence, you guessed it, Vishnu hates Raghu. We are not given even a hint of a background as to why Raghu is so dear to Anna. The character says it and we have to believe it. Simple and easy. Storytelling? What’s that?

The place becomes even more lawless when Vishnu surrounds the construction site with barbed wire, security barricades, sandbags and hundreds of men armed with machine-guns. You wonder whether you are in Mumbai or on the India-Pakistan border.

The lame reason for this is to wait for Raghu to arrive and kill him. According to Anna's orders, Vishnu or his 'army' can only kill Raghu if he attacks first. And this ultra-rebellious son obeys his father! We wonder why.

Once again, neither the police nor the authorities or the media find anything weird in the parallel army raised by Vishnu. There is a cop, Yadav (Ravi Kishan), who appears once in a while as if most days he simply works from home. At one point, he even cracks a joke about the police arriving late in Hindi films.

Raghu’s life takes a different turn when fate brings him face-to-face with the cute, innocent mute girl Zoya (Tara Sutaria). They quickly fall in love simply because the makers have signed them opposite each other. But Raghu’s life is shattered when things so happen that he has to kill Zoya. 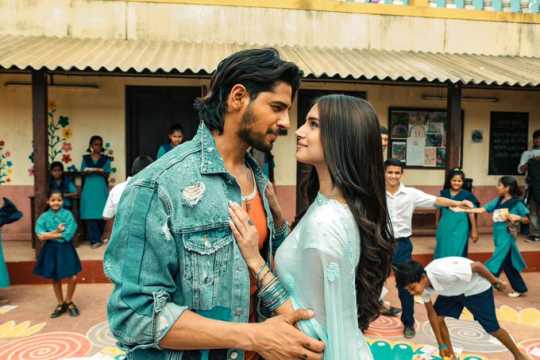 Despite the silliness of the plot and the screenplay, the least one expects from such films is some entertainment. In interviews, Zaveri has also said that this is a "commercial entertainer". But Marjaavaan treads a sad, depressing, violent route most of the time. There is also a scene where Raghu uproots a huge object from the ground to kill the baddies, just like Sunny Deol did in Gadar: Ek Prem Katha (2001).

The lack of entertainment is felt more after the main point of Zoya’s death, following which the film should have moved into top gear. Instead, we get a loud background score and forced-to-rhyme dialogues that hardly make an impact. Luckily, the song ‘Tum Hi Aana’ and its tune played as a motif throughout the movie helps.

However, the performances ensure you don’t feel at all for the 'good' guys. Malhotra has the physique needed to be the ‘hero’ in such films, but he struggles with his emoting. Deshmukh’s evil character is too one-dimensional. Nassar, normally a fine performer, is also unable to reach his usual heights because of the silly nature of his character.

The only plus point here is Tara Sutaria. The young actress delivers a moving performance in only her second film (she had made her film debut earlier this year in Student Of The Year 2), expressing herself well wordlessly. She does seem to have a bright future. Now if only we could say the same for the film.

Zindagi In Short review: This Guneet Monga-helmed anthology offers compelling vignettes of the extraordinary within the ordinary

Seven short films artfully explore situations that arise in the lives of ordinary people as the...

Hitesh Kewalya's directorial debut aims to change the gaze of love stories in Hindi cinema, with...

The Vicky Kaushal-starrer, the first of a planned horror trilogy, falls prey to the well-known...