An ordinary woman is spurned into taking matters into her own hands after her daughter’s murder in this compelling but overcomplicated Netflix revenge saga.

Created by Atul Mongia, the web-series Mai (2022) opens on a powerful note. The promising future of a young woman named Supriya (Wamiqa Gabbi) is brutally cut short after she is mowed down by a truck, a tragedy that is witnessed by her mother Sheel Chaudhary (Sakshi Tanwar). But there is more to the mishap than meets the eye.

Set in Lucknow, the story takes the ordinary Sheel, a dedicated nurse, on a treacherous journey and she discovers that Supriya’s death is part of a major conspiracy. As a mother, she used to pride herself on her close relationship with her daughter, who damaged her vocal cords at a young age, but the more she uncovers, the more she realizes how ignorant she has been.

Tanwar, who made a name for herself in the world of television, is terrific as a grieving mother who becomes obsessed with finding out who ordered the hit on Supriya. By doing so, she becomes involved in a criminal nexus led by some very dangerous people.

One of them is the businessman Jawahar (Prashant Narayanan) whose mother Kusum is under Sheel’s care at the old age home Geeta Bhavan. His associates, which include the next-in-command Neelam (Raima Sen), along with minions Prashant (Anant Vidhaat), Shankar (Vaibhav Raj Gupta), Keshav and Raghu (Saurabh Dubey), move into second gear when their money-laundering business is threatened and an important cryptocurrency key goes missing.

Here is when the plot begins to thicken, and not in a good way. The writing, by Mongia, Tamal Sen and Amita Vyas, gets complicated as it moves away from Sheel, her grief and dealings with the extended family, and onto the many machinations of the upper echelons of the gang. There is also UP special force officer Farooque Siddiqui (Ankur Ratan), who is tracking Jawahar, his crew and their illegal activities and who also knew Supriya. 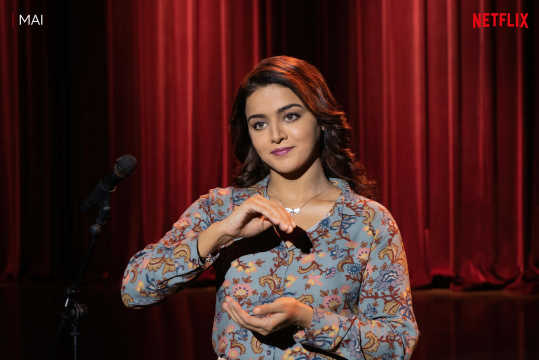 The characters' ties result in many plot conveniences. Furthermore, Sheel, who has the skills to become a doctor, but couldn’t obtain a medical degree due to personal reasons, becomes absolutely ruthless in her quest to take down her daughter’s killers. It’s almost as if she is compensating for her lapses and inability to help Supriya when she was alive. Sheel may be clumsy at first, but she gets better at criminal activities, which she carries out so that Supriya's soul can rest in peace.

The moments when Mai focuses on Sheel and her impulsive actions are the strongest, even though one can get easily frustrated with her recklessness. Her relationship with her husband Yash (Vivek Mushran) and their marriage aren’t explored as fully as I would have liked. There is also a big power imbalance between her and her wealthier brother-in-law’s kin, who seems to control her family as well.

It would have been integral for the series to focus on these aspects. Instead, Mai zeroes in on the criminals and their ‘war’ with the SPF. Sheel, of course, is in the middle of all this, with one lone ally Kalpana (Seema Pahwa), her co-worker with a criminal past from the old age home. However, Pahwa doesn’t get much to do beside silently supporting Sheel.

The six-episode series, which has been directed by Mongia and Anshai Lal, has plenty of revelations and twists that keep one hooked; however, Sheel’s near-misses each episode grow fantastical. Certain characters’ actions felt extra violent for my taste, but that seems de rigueur for the Indian digital spaces these days.

The ensemble cast, especially Vidhaat, Gupta and Prashant, are all imposing, but Mai rests on Tanwar’s performance. It’s too bad the writing didn’t support her completely.

While binge-watching Mai, I wondered if it would have been better if it was a feature instead of a series; the extra time in every episode allows for many digressions. However, the gut-punch ending all but assures us that the story of Mai is far from over.

Mai is being streamed on Netflix.