Maharani (Season 2) review: Huma Qureshi is commanding as a self-assured politician coming into her own

SonyLIV’s political thriller Maharani returns with a bang with its second season. With the lines firmly drawn in battleground Bihar, the gloves are off in the tussle for political power. Created by Subhash Kapoor and directed by Ravindra Gautam, the series stars Huma Qureshi, Soham Shah, Amit Sial, Kani Kusruti, and Anuja Sathe.

Set in 1990s Bihar, the series is inspired in part by the unexpected coming to power of Rabri Devi, wife of politician Lalu Prasad Yadav. In the first season, Rani Bharti (Huma Qureshi) is thrown at the deep end of politics and must quickly learn to swim in muddy waters as she becomes the chief minister of the state. Although it is her husband, the charismatic leader Bheema Bharti (Sohum Shah), who names her as his successor, he soon realises that his wife will not be a mere puppet.

With sharks circling the waters, Rani proves to be a quick learner, who becomes exposed to the grimy underbelly of politics and must learn to take decisive action. She sets out to do the best for the people of the state, realising that honesty must go hand-in-hand with guile to survive.

The second season picks up the threads and begins with Rani Bharti being subjected to an enquiry committee. We see her struggle to get things done as her husband continues to run the government from his jail cell, leading to her frustration. The crevices between their marriage deepen and the two are at loggerheads.

While the husband and wife keep their guns trained on each other, Navin Kumar (Amit Sial) is desperate to become the next chief minister and will stop at nothing. Together with opportunists like Gauri Shankar Pandey (Vineet Kumar), the governor (Atul Tiwari), and other ambitious politicians, the stage is set for the political drama to unfold.

The Rani Bharti-led government faces various problems from jungle raj [lawlessness] and increasing violence, to caste and religion politics. Although we see glimpses of the issue of caste, religion takes centrestage as the opium of the masses. Back home, she faces opposition to her sending her own husband to jail. 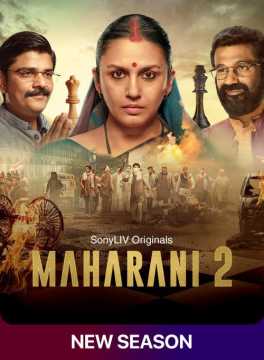 As the elections are announced, all kinds of strategies are unleashed to grab power. We see the coming of savvy data analysts in elections, who focus on image-making and in the wake of mediatization, politicians learn to perform in front of the camera.

Although the series takes a bit of time to pick up the momentum and the pace slackens intermittently, it is overall engaging. As a show about a politician who focuses on society, and the betterment of the State, the general populace comes in as unidentifiable masses.

There is a point when Rani Bharti asserts her identity as being separate from being that of a married woman, and says Bihar is ready for it. But we have no idea if it is! We do not know what the common people make of her and her policies. Curiously, we do not know what media and journalists think of her either. For a political show, this seems to be a bit of a gaping hole.

Huma Qureshi’s performance is definitely a strong suit in the series. She is self-assured in her performance and shines, particularly in the scenes where she fights back. Bharti is a good mother to her children, performs the duties of a good wife despite being ideologically opposed to her husband. 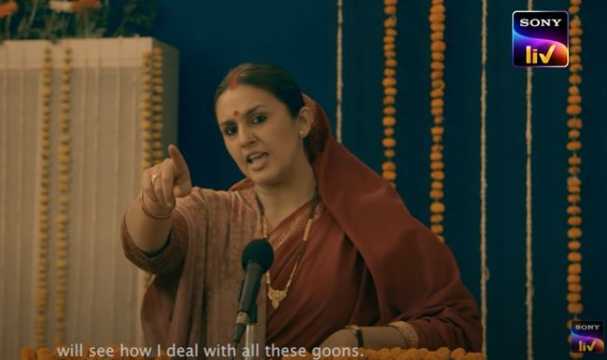 She is vulnerable but also willing to fight every obstacle that comes her way. The portrayal of a woman in power, who is also seen navigating the domestic sphere, remains a strong USP of the show.

Sohum Shah, Kani Kusruti, Amit Sial and Vineet Kumar in particular, give commendable performances. Kumar is simply delightful in the mind-boggling ‘Aansoo yatra’ that he embarks on as well as a scene where he reacts hilariously to certain photographs being shown to him.

On another note, the choreographed climax of the show, which becomes the big reveal for Bharti, is a nice touch. Drawing inspiration from the Shakespeare Society that finds mention in the show, the director draws parallels between Julius Caesar’s senate and the politicians in Bihar. The methods remain the same. As do the motivations.

Despite a few misses, one looks forward to Season 3 of the series.