The personal examination by filmmaker Suneil Sanzgiri tries to make sense of events, past and present, around him.

In the short film Letter From Your Far-off Country, filmmaker Suneil Sanzgiri examines family threads that begin before and after his birth in 1989. Inspired by the Kashmiri-American writer Agha Shahid’s poignant letter to himself, Suneil writes a letter to his relative Prabhakar Sanzgiri, the late writer, activist, trade unionist and Communist Party of India (Marxist) leader from Maharashtra.

His father narrates Suneil’s letter to Prabhakar as the filmmaker begins to understand the past and to come to terms with the present. Suneil Sanzgiri traces his origins and informs Prabhakar of what he has learnt from observing previous atrocities, including the conditions in Kashmir and last year’s Shaheen Bagh protests.

The style of the short is hard to comprehend at first, as it weaves in text, visuals, audio and songs to create a collage of memory and history. But, slowly, one can see that it is a process of trying to comprehend those you never knew, while making sense of current events. It is made up of archival footage and 16mm film recordings that give it a distinct look. 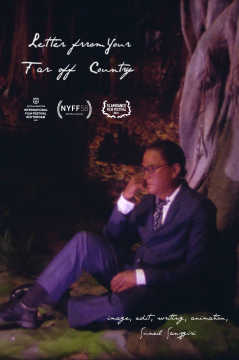 Suneil anzgiri and his father both make appearances in the short as they try to decode Prabhakar and what he stood for. Footage from the Dr Ambedkar National Memorial in Delhi is shown as the young filmmaker tries to link events of the anti-CAA (Citizenship Amendment Act) protest with what the great statesman charted out in the Constitution, forging equality for all of India’s citizens.

But what remained noteworthy for me was footage of a poised Shabana Azmi reading out from a protest leaflet to an audience at the International Film Festival of India (IFFI) in 1989 after the murder of playwright Safdar Hashmi. She stated, “We filmmakers and film lovers wish to register our protest against a system that on the one hand claims to promote creativity and, on the other, connives in the murder of cultural activists.” Few dare take such a precise and public stand today.

The film opens with the words, 'From one's birth a wellspring of worlds', and ends with the striking statement, 'How we connect, how we comprehend is up to us.' It’s a necessary reminder to us to question and seek out more from the world around us rather than just observe and be silent.

Letter From Your Far-off Country was screened at the Berlin Critics' Week, from 27 February–7 March 2021, and is being screened at the 19th Indian Film Festival of Los Angeles, on from 20–27 May 2021.