Set in a small North Indian town, the film comes across as a derivative, generic dramedy that is afraid to go beyond the clichés associated with the genre.

Going by the trailer, one might think writer-director Ssaurabh Tyagi's dramedy Kya Meri Sonam Gupta Bewafa Hai? is inspired by a meme that went viral when a person wrote 'Sonam Gupta bewafa hai [Sonam Gupta is unfaithful]' on a Rs10 currency note and it grabbed the attention of social media. But the film has very little to do with that incident. It is there, but it just comes and goes without affecting the main plot in any way. Even if Tyagi had removed this incident from the film, it wouldn't have made a difference to the plot.

The 26-year-old Sintoo (Jassie Gill), who, according to a fortune teller, is destined to be a popular and successful man, spends his days following his dream girl Sonam Gupta (Surbhi Jyoti) on a bike with his friend. His father (Atul Srivastava) owns a shop and wants him to concentrate on the business.

The setting is too familiar. A small town in North India, a good-for-nothing young man who is mischievously trying to woo a girl way out of his league, a worried father, a frustrated sister, and one jobless friend who doesn't seem to have any personal life and just spends his time riding along with our protagonist on his bike. Everything comes across as a poorly recycled version of what we have seen in numerous Hindi films in the past few years.

For the most part, Kya Meri Sonam Gupta Bewafa Hai? comes across as a derivative, generic dramedy set in a small town of North India that is too afraid to step outside the clichés associated with this genre. It is only in the last 40 minutes, when our aimless protagonist Sintoo tries to get his life on track, that the film becomes watchable. The second half has some genuinely dramatic moments that will tug at your heart. The film also makes some risky choices towards the end, but by then it's already too late. 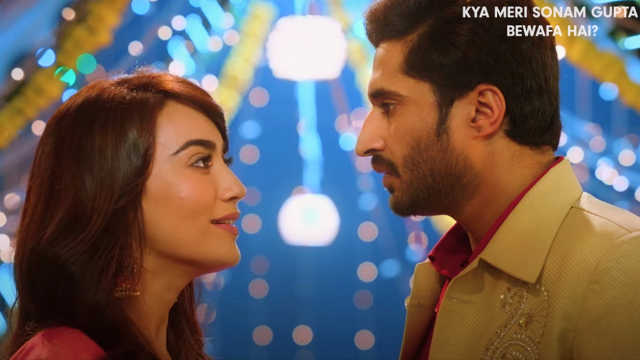 Every romantic interaction of the lead pair is followed by songs that hinder the pace of the film and don't let the changing dynamics of their relationship and their character arcs be highlighted. It's like we see them grow from strangers to friends and then a couple through a series of montages instead of proper, well-written scenes.

Another thing missing from the film is those snappy, funny one-liners that will get at least a few chuckles. The unfunny dialogues even dilute the scenes which had the potential of generating some laughter.

The performances are also average at best. Gill struggles to bring forth the dilemma of his character. While watching the film, one can't shake off the feeling that his performance seems to be based on the other performances we have seen in films in this genre. His limitations as an actor get further underlined in emotional scenes.

Surbhi Jyoti, despite playing the female lead, has little to do in the film. Even after the film ends, we feel like we hardly know her character. Atul Srivastav and Vijay Raaz once again deliver solid performances despite having very little screen time.