The actor plays a former cricketer who returns to the pitch for the sake of his son in this Hindi remake of Gowtam Tinnanuri’s 2019 Telugu hit.

In his second consecutive South remake, Shahid Kapoor hits his stride. There are echoes of Kabir Singh (2019) here too – Jersey’s Arjun Talwar is young, hotheaded and has a tempestuous romance. But he grows up.

Jersey review: A moving sports drama about a late bloomer

Arjun, a talented cricketer on the verge of being selected for the national team but for certain politics,  gives up the sport at 26 suddenly, much to the dismay of his loyal coach Bali (Pankaj Kapur). After marrying his sweetheart Vidya (Mrunal Thakur), he settles into a life of domesticity and his new role as a father to Ketan aka Kittu (Ronit Kamra).

But a decade later, he feels he has failed his family. Suspended from his job at the Food Corporation of India for two years, he sticks by his principles, refraining from bribing his way back in. The family gets by on Vidya’s salary but it is not enough to live comfortably.

When Kittu begs him for a team India cricket jersey for his upcoming birthday, Arjun impulsively agrees, not knowing what it will require for him to get the Rs500 gift. He grows frustrated with his friends, coach Bali and even Vidya, before deciding that cricket is the method to reclaim those lost years and finally be a hero in his son’s eyes.

At 36, he fights the odds, and younger players, to win a spot on the Punjab cricket team again and makes them contenders for the Ranji trophy. The goal is, of course, to be selected for the national team.

Gowtam Tinnanuri, who also helmed the original film, once again displays a firm grasp on the material. The bond between a father and son is universal and Arjun’s love for his family is all-conquering. While it initially seems that he is embarking on a personal quest, the moving feature shows that it has always been about his family. 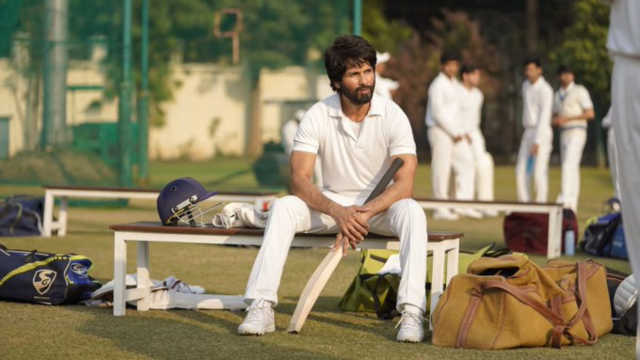 Nani gave a powerful portrayal as the lead character in the National award-winning Telugu film, but Kapoor brings his interpretation to the role, which I found to be a little more vulnerable and haunted. The actor also has some lovely scenes with coach Bali, his surrogate father, played by his real father Pankaj Kapur.

Child artiste Kamra reprises his role from the Telugu film and is just as adorable here. Thakur as Vidya isn't as developed as Kapoor’s Arjun, but the trio’s bond as a family is natural and believable. There is an organic progression in Arjun and Vidya’s relationship – from the highs of young love to the prosaic routines of life and marriage as they weather financial troubles.

Even with a 174-minute running time, Jersey doesn’t feel like a slog. Arjun’s journey is highlighted by entertaining and tense moments on the cricket pitch as he works his way back to the top. These portions are wonderfully shot by cinematographer Anil Mehta and edited by Navin Nooli, who won the National award for the Telugu version.

The soundtrack by Sachet-Parampara is melodic and appealing while the background music by Anirudh Ravichander is uplifting.

Gowtam’s feature shines in the little moments, such as when Arjun anxiously waits to be selected, or his resignation at being overlooked in favour of younger players. It gives us a character to root for. Jersey also depicts his evolution, showing how far Arjun comes – the older version is still confident but his arrogance has faded.

Jersey, which features one of Kapoor’s finer performances, is an inspirational family film. Towards the finale, Gowtam dials up the sentiments, but you leave the theatre feeling surprisingly moved nevertheless.