Jalsa review: Terrific drama that balances guilt and conscience in a thrilling manner

Vidya Balan and Shefali Shah lead a strong cast which holds up a compelling narrative in this tense feature by filmmaker Suresh Triveni.

A girl’s bright future is derailed when she is mowed down by a car and left for dead on a quiet Mumbai street in the wee hours. The identity of the driver is revealed to the viewer early on, but how that information reaches the rest of the characters makes up the tense thriller Jalsa (2022), co-written and directed by filmmaker Suresh Triveni.

Teenager Alia (Kashish Rizwan) is the daughter of Ruksana (Shefali Shah) who works as a cook and maid for Maya Menon (Vidya Balan). Menon is a top journalist at WRD, whose motto is ‘Face the Truth’; she is at the top of her game professionally and is known for being principled.

However, with Alia in hospital and young reporter Rohini George (Vidhatri Bandi) seeking to make a name with an exclusive, Maya has more than she can handle. At home, she also has a special-needs son Ayush (Surya Kasibhatla) whom she shares with ex-husband Anand (Manav Kaul). But the stress of the truth, and what she should do with it, almost drives her over the edge. 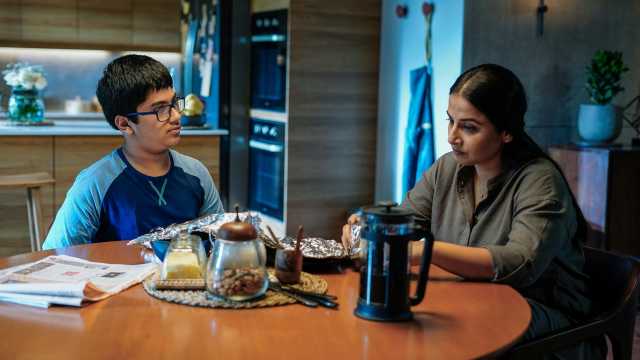 Co-writer Prajwal Chandrashekar, with director Triveni, has created a tightly woven screenplay where every little detail counts. Every character has a key part to play in setting up the story, from cops investigating the case (Ghanshyam Lalsa and Shrikant Mohan Yadav) to Maya’s colleague and boss Amar (Mohammad Iqbal Khan).

But the core of Jalsa’s story revolves around mothers who care fiercely about their children and would do anything for them. There is Vidya as Maya, who has her son Ayush and her mother (Rohini Hattangadi) who keep her grounded. Shefali Shah’s Ruksana has Alia and Imaad (Shafeen Patel) who are the centre of her universe. 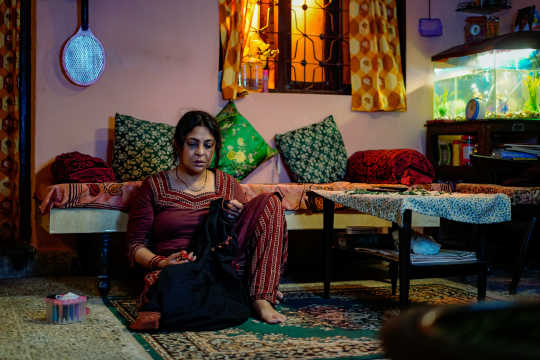 Ruksana and her husband work hard to provide an honest living for their kids. But after the accident, the lines become murky. Ruksana wants to go after the driver while her husband wants the fracas to die down.

The dialogues by Hussain Dalal and Abbas Dalal give you the lived-in feel of Mumbai and its residents, who come from all corners to call the city home. The script balances the tension of the overall lies being suppressed and the effect it has on all those who are linked through it.

The sound design by Anthony B Jayaruban brings you into the world of Jalsa, from the eerie silences to the sudden violence of the accident. We also get an insight into Maya’s viewpoint, through editor Shivkumar V Panicker, as she deals with sudden anxiety attacks, the throbbing of her heart to her disorientation to what’s happening around her. 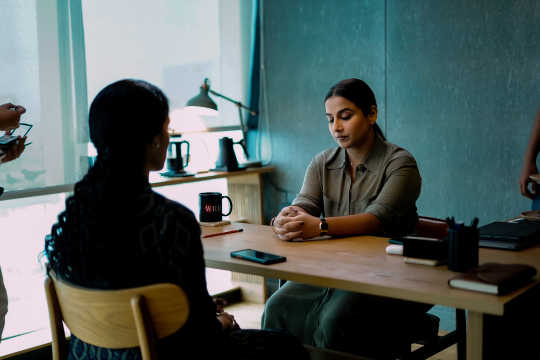 Vidya as Maya is once again first-rate. She alters herself from a confident, almost smug journalist to a woman who has to wrestle with her conscience and almost has a breakdown. She is matched by Shefali Shah, who fights for her family despite the odds. In a way, she is the real head of the family.

Both Vidya and Shah are the kind of artistes who can say more with their expressions than with two pages of dialogue. They take us through the inner turmoil of their characters as they face up to some hard truths.

Veteran Rohini Hattangadi fits into the role of a caring grandmother with ease, while Vidhatri Bandi could have had a slightly more elevated role as the eager, ambitious Rohini. The rest of the cast as well hold up this compelling narrative.

After a terrific build-up, Jalsa’s ending arrives a bit too soon. The path is riddled with anxiety and might leave some wanting more. Triveni’s directorial debut was the feel-good Tumhari Sulu (2017), but with Jalsa, he offers plenty of tension and a story that keeps you on tenterhooks.