The newest Netflix entrant, Drive (2019), directed by Tarun Mansukhani, wants to be a lot of things — it wants to be slick like the Ocean’s series, thrilling like the Fast And Furious films, and clever like the Mission Impossible franchise. It is ultimately none of those.

Tara, played by the perfectly coiffed Jacqueline Fernandez, and her crew rule the racing scene in New Delhi. They also moonlight as robbers, and are in pursuit of another robber, King, who has made off with a king’s ransom in gold.

Fernandez and team are also eyeing minister Vibha Singh (Vibha Chibber) and her secret stash of black money taken from businessmen she gives clean chits to. Vibha Singh and her top aide, Hamid (Pankaj Tripathi), have hidden the cash in a secret chamber at Rashtrapati Bhavan.

Enter Sushant Singh Rajput as a Formula 1 racer who dazzles Tara and company with his driving skills and quick thinking. Together, they work towards pulling of the perfect heist. 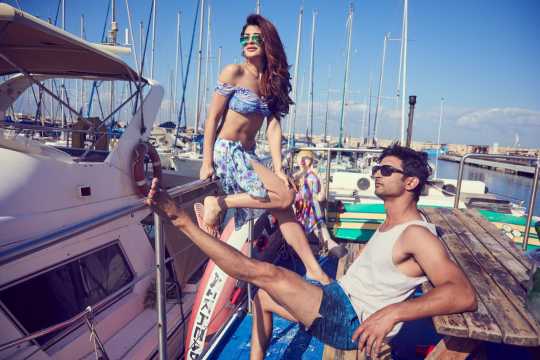 Mansukhani’s second feature film is too long by far and the songs are completely unnecessary, adding nothing to the narrative. The ‘Makhna’ song, while lovely, is just an advertisement for Israel tourism. What’s worse is the car chase sequences are just a blur of dark roads and CGI cars.

We are never fully involved with the key players to understand the overall stakes of it. In the Fast And Furious films, for instance, Dom (Vin Diesel) and his crew are family and the stakes are almost always personal. The money and gold here are alluring, sure, and stealing from a corrupt politician seems like karmic justice, but Drive ultimately goes nowhere with all its posturing.

Boman Irani as Irfan and Pankaj Tripathi as Hamid, as the guys in constant pursuit of the robbers, always have to pretend to be one step behind the action. Both actors could perform this kind of role in their sleep. Vikramjeet Virk and Sapna Pabbi don’t have much to do.

The writing, also by Mansukhani, pulls one too many baits and switches, and the last ‘twist’, well, let’s just say, we spotted that a mile away. The long-delayed project, arriving on Netflix today, has not benefited from its time in gestation.

The low budget for the VFX means most shots look like a video game rather than a high-stakes car chase. More often than not, Mumbai is passed off as Delhi, and the recreated interiors of Rashtrapati Bhavan feel staged.

But the main drawback is the casting of the leads, Rajput and Fernandez, who have little chemistry between them and are not convincing as burglars or racers.

On the whole, Drive just feels laborious and pointless. No wonder producer Karan Johar decided against a theatrical release for this one.