Dil Bechara review: Bittersweet romance that will have you reaching for the tissues

Mukesh Chhabra's directorial debut, adapted from John Green's novel The Fault in Our Stars, features a heartrending turn by the late Sushant Singh Rajput and a memorable debut by Sanjana Sanghi as the terminally ill Manny and Kizie, respectively.

A romance about two cancer patients grappling with their mortality was never going to have a happy ending. Dil Bechara's narrator Kizie Basu (Sanjana Sanghi) promises us as much. But the film's ending feels doubly hard as not only do we have to say goodbye to the amiable Manny, but also to the actor who portrayed him, Sushant Singh Rajput.

Rajput in his final film, released after his death by suicide on 14 June, is all charm as a rakish sweet talker who happens to be a die-hard Rajinikanth fan. Kizie and Manny aka Immanuel Rajkumar Junior have a chance meeting at college from where the 24-year-old has already graduated. Kizie dislikes him instantly, but Manny continues to pursue her hoping to be friends, and maybe more, and she can't resist. Slowly, the two fall in love despite their grave prognoses.

You see, Kizie is living with thyroid cancer and has to carry around an oxygen cylinder (which she calls Pushpinder) for her to breathe. Manny, meanwhile, had to have part of his right leg amputated because of osteosarcoma. Their friend JP, short for Jagdish Pandey (Sahil Vaid), is about to lose his second eye, and therefore his eyesight, to cancer as well. 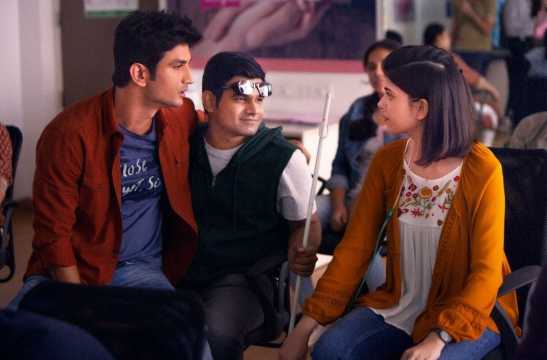 Despite their personal tragedies, this trio throws in its free time to fulfil JP's dream of a Bhojpuri film which is superbly titled Rajini Aavat Hai Sapne Jagavat Hai. These portions are hilarious. The more time the uptight, lonely Kizie spends with the outgoing, filmi Manny, she begins to change her perspective on life. The two opposites begin to explore each other's interests more.

Manny discovers Kizie's preoccupation with the reclusive musician Abhimanyu Veer (Saif Ali Khan in a cameo) and his incomplete song 'Main Tumhara'. Somehow, they manage to contact him in Paris, and get an invitation to meet in person. Kizie's health declines, making the Paris trip impossible, but Manny throws in an impassioned speech of living our dreams, and eventually the young couple has its romantic Parisian excursion, barring a nasty meeting with the eccentric Veer.

The trip reinforces their romance, and when they return, their bond gives Kizie the strength to live with the daily uncertainties of life, with the knowledge that she is loved by those around her. Dil Bechara is an official adaption of John Green's bestseller novel The Fault in Our Stars, as well as the 2014 faithful film adaptation starring Shailene Woodley and Ansel Elgort. Mukesh Chhabra, in his directional debut, stays true to the essence of the film and the novel while adding a distinctly Indian flavour to the story.

The action is now set in Jamshedpur and certain elements have been changed. Manny is older than Kizie, but while the baby-faced Sanghi fits as a teenager, Rajput doesn't look like someone in his mid-twenties though the film was shot two years ago, when the actor was 32. Suprotim Sengupta and Shashank Khaitan stick to Green's template, with much of the dialogue translated from the novel to give that same kick to the stomach. 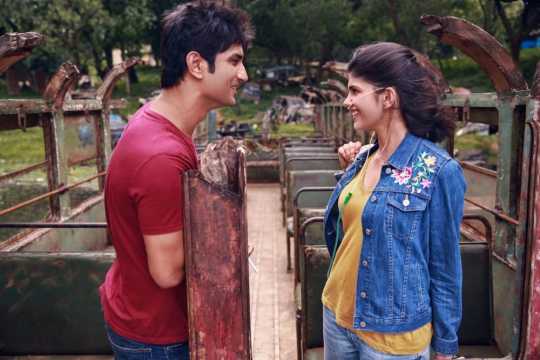 Watching the film is bittersweet, with some of the dialogues landing hard, almost unsettling the viewer, especially when Manny makes JP and Kizie give their eulogies to him, wanting to attend his own funeral. It's hard not to get choked up as Rajput's Manny finally brings up his declining health and breaks down. The film is also bookended with tributes to the late actor; the opening tribute has a thought from Rajput himself which states: Perhaps the difference between what is miserable and that which is spectacular lies in the leap of faith... #selfmusing

Rajput turns in a dedicated performance like he did in his debut film Kai Po Che! (2013) and in MS Dhoni: The Untold Story (2016). Though we know more about Kizie as the film is told from her viewpoint, Rajput carries the film over newcomer Sanghi with his self-assured yet vulnerable act.

Vaid as JP and Saswata Chatterjee and Swastika Mukherjee as Kizie's parents also stand out for their moving performances. Sanghi isn't as polished as the rest of the cast, but she is memorable in her first lead role. Saif Ali Khan's cameo, however, is not, despite its importance to the overall arc of the film.

Chhabra shows he is a capable director as he handles the film's lighter and heavier moments well. The film's smaller setting also gives a realness to the romance of Kizie and Manny. AR Rahman's score, along with Amitabh Bhattacharya's lyrics, for songs like 'Taare Ginn' and 'Main Tumhara' contributes to making those wistful moments between them count even more.

Disney+ Hotstar is now streaming Dil Bechara for both subscribers and non-subscribers.