The Gujarati film by Nainisha Dedhia was chosen Best Film in the Indian Competition section at the recent Bengaluru International Short Film Festival.

The Gujarati short film Dhummas (Haze) does, in fact, open on a foggy day revealing an ancestral house. Mrinalini (Sonali Bharadwaj), who is trying to write a book review, gets roped in to look after Baima (Pramodini Nanavati) while the caretaker steps out for a bit.

The older woman, who has been battling memory loss for a while, can’t seem to recollect who Mrinalini is. “I’m Darsh’s wife,” she offers helpfully.

Suddenly Baima starts speaking about meeting Mahadevi Verma, the same author whose work Mrinalini is trying to review. The two women sit down for a quiet chat as Baima begins to recollect her own past when she used to write.

Her writing was discouraged by her mother-in-law and, later, husband and Baima reveals the little ways in which she began to hide her identity. The more she talks, in a matter-of-fact manner, the more we realize how much she must have endured. Eventually, she ends the impromptu conversation with a disturbing secret about her past. 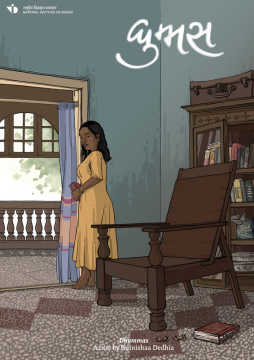 The nineteen-minute film by Nainisha Dedhia is sluggish in pace, but the filmmaker sets up the intrigue about the older woman’s past well. Dhummas is based on the short story Ormayude Njarambu (The Vein of Money) by KR Meera.

Dhummas, which is dedicated to Baima, carefully draws the two women together and links them in a shared memory. While Mrinalini doesn’t have much to contribute to the conversation, her talk with Baima forces her to re-examine her own life as a married woman in new light.

Nanavati is stiff initially but brings forth a nice touch of regret as she divulges stories from the past. The cinematography by Appu Prabhakar is well-composed and evokes a sombreness of nostalgia. The short film, which was shot in Matheran, makes good use of the interiors and exteriors.

The Gujarati-language short by Nemil Shah is a touching story about gender identity....

Cutting (Season 2) review: Reverses the charm and setting of the first season

The hairstylist siblings Sunny and Bobby get an unwelcome upgrade that makes us yearn for the of the...

The veteran actor essays a wronged father and a police officer investigating a suspicious family in...