Co-directors Satyanshu and Devanshu present an Indian family stranded in Baghdad trying to make the best of their circumstances in this uneven film set in 2004.

All little Chintu Tiwari (Vedant Raj Chibber) wants is some cake and toffee for his big day. His father Madan (Vinay Pathak) has the day covered, but the cake and the party are going to take some doing.

Chintu Ka Birthday, co-written and co-directed by Satyanshu Singh and Devanshu Singh, takes place on an eventful day in the lives of the Tiwaris as Chintu turns six. The Indian family is stranded in Baghdad, Iraq, after a naive error on Madan's part, and while they wait to be evacuated, life goes on as usual, despite air raids and bombs that go off in the city. 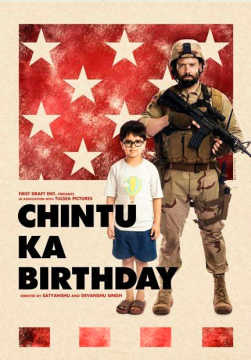 The rest of the family consists of Chintu's elder sister Lakshmi (Bisha Chaturvedi), their mother Sudha (Tillotama Shome), and Sudha's mother (Seema Pahwa). They are joined by their Iraqi landlord Mahdi (Khaled Masso) who drops by to wish Chintu. We quickly learn the party is not going to plan, as the city bakery is no more.

The family keeps up appearances to come up with a plan B, until a car bomb goes off right outside, reminding us yet again of the dangers that lurk beyond the door. The appearance of two American soldiers, Darren (Nate Schloz) and Louis (Reginald Barnes), investigating the situation quickly elevates the film into sobering seriousness.

This happy, normal family is then seen to be something it is not by Darren, a soldier newly sent to the war zone. Louis tries to defuse the situation, but his compatriot has already taken things to another level. As the 'party' descends into chaos, will Chintu ever get to celebrate with some cake?

The wonderful cast that makes up the Tiwari family is all heart. Pathak and Shome radiate emotion and subtlety as Chintu's doting parents, and the youngster Vedant is absolutely charming. Even the American soldiers and Masso infuse their characters with flair. Chintu's young friend Waheed (Mehroos Mir) steals every scene he is in.

But the film is both elevated and hindered by limiting the story to one location. While there are some scenes between the soldiers and the family where you can cut the tension with a knife, sometimes the story moves in an unpredictable manner to little effect. The actions of some of the characters are questionable, especially Madan, maybe because the whole film remains mostly in one room over one day.

Chintu Ka Birthday tells a very different story of family togetherness and love. The film is only 83 minutes long, but packs in a lot in that time.

The sound design by Bishwadeep Chatterjee establishes the scenario with jarring effect. We are pulled out of the cozy home scene to be reminded that yes, there is a war raging outside. The back story of how the Tiwaris landed up in Baghdad, and in their present fix, is told neatly in an inventive animation sequence.

However, the sudden shift from warm family comedy to serious drama to warm comedy again is a little discordant. While I understand what the filmmakers were trying to do, it just felt uneven and lagging.

Chintu Ka Birthday was screened at the 10th Jagran Film Festival on 28 September.

Uljhan review: A couple wrestles with an ethical dilemma in this thoughtful, compelling drama

First-time filmmaker Ashish Pant has crafted a sensitive feature that examines the weighty issues of...