Aatpadi Nights review: Deals with the lesser-explored issue of thin-shaming among men

The film has a perfect casting in the form of the lead actor Pranav Raorane.

Mainstream Hindi cinema has finally opened up to social stigma faced by married men or men about to be married. Ayushmann Khurrana played such a character in director RS Prasanna’s Shubh Mangal Saavdhan (2017). It was the official remake of the Tamil film Kalyana Samayal (2013) by the same filmmaker.

With director Nitin Supekar’s Aatpadi Nights (2019), we can say mainstream Marathi cinema too has opened up on issues faced by men, which, in this case is thin-shaming. This is rare since body shaming is usually limited to fat-shaming.

The story takes place in a village named Aatpadi. Vasant Khatmode (Pranav Raorane), a happy-go-lucky youngster, stays with his parents, elder brother, sister-in-law and nephew. Like every traditional family in a village, his family is worried for his marriage. As luck would have it, numerous girls have been rejecting him for his slim build.

But Vasant’s life takes a pleasantly surprising turn when the good-natured and pretty Priya (Sayali Sanjeev) agrees to marry him despite his physical appearance. However, a large number of villagers keep telling him on his face that he won’t be able to sexually satisfy his wife because of his appearance. This is the commencement of a new battle for Vasant.

The aforementioned synopsis might give an idea that the film deals with a serious subject, which it does. But the narrative treads on a light-hearted and funny path for most of its duration. The issues faced by Vasant are also smartly woven amidst the humour. For example, Vasant wearing a number of T-shirts and shirts in order to look healthy make you feel for him, but at the same time, you can’t help but laugh at the situation.

Pranav Raorane’s casting is bang on here. The film would have gone wrong if the casting wasn’t perfect and this has not just to do with the actor’s physique. Raorane displays some natural comic timing, but also scores in the emotional moments.

Sayali Sanjeev shows that she is not just pretty, but also possesses good acting skills. She has a line-up of films in the upcoming year and she is someone to lookout for. 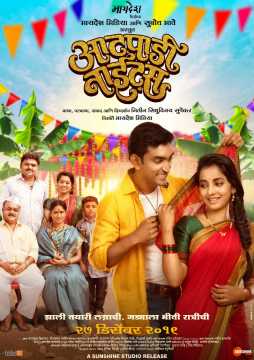 There are moments in the film that might appear problematic in today’s times. Like, Vasant’s father literally forcing [read harassing] him to bear a child [read son] soon without making it look like a wrong attitude. But we should remember that when people with such mindsets are found even in urban cities like Mumbai, and Aatpadi is still a village.

Another impressive bit about Aatpadi Nights is that it organically links the two issues about thin shaming and sexual dysfunction. Similarly, the narrative shifts from funny to serious in a gradual manner.

But despite these things working for the film, Aatpadi Nights falters in delivering an overall impressive package. Like many other films, this one too suffers from the second half syndrome.

The writers do successfully bring forth Vasant’s overall condition, but it seemed they didn’t know what else to do with it. This gives rise to some dry moments where nothing substantial happens and you start noticing the time.

There is a long sequence where Vasant is just moving around the village without anything happening. It looked like the writers wanted to narrate the protagonist’s condition with subtlety but they overdo it. On the other hand, the narrative suddenly becomes too preachy towards the end.

A balance between subtlety and preachiness should have been maintained. Subodh Bhave's guest appearance in the end is pleasant but it does remind you of his cameo in Welcome Home (2019).

Overall, Aatpadi Nights does suffer from these issues. But it deserves some credit for daring to showcase the stigma faced by people who are considered skinny.

Grey review: A shoddy film that insults the audience's intelligence

An official remake of Jeethu Joseph's Malayalam thriller Oozham (2016), the movie is a on...

Adhantari review: Short, sweet, succinct play of the journey of a relationship during lockdown

Directed by Jeet Ashok, Adhantari is a sweet, entertaining romance that is a different take on the...

Mrunmayee Deshpande's commanding portrayal of a woman who is in love with two men is the only of...