Director RS Prasanna deals with the serious and socially relevant subject of erectile dysfunction in the most hilarious manner.

A remake of the 2013 Tamil film Kalyana Samayal Saadham, Shubh Mangal Saavdhan tells the hilarious and socially relevant story of Mudit (Ayushmann Khurrana) and Sugandha (Bhumi Pednekar) whose love-arranged marriage plans land in jeopardy when Mudit discovers a "gents problem". Their premarital romance and sexual relationship begin to go limp even before they can get it up and running.

While Sugandha, though dealing with her own confusion and doubt, is extremely supportive, Mudit himself finds it difficult to accept his weakness. And the situation goes from bad to worse when the families get involved.

Shubh Mangal Saavdhan portrays the societal taboo associated with male sexual problems. So much so that people would rather first opt for babas and religious rituals than seek psychologocial counselling or medical help.

By showing you what families do to young men with sexual problems, the film demonstrates what not to do, and what the right attitude to this problem should be.

At its core, the film deals with how mardangi or masculinity is wrongly equated with the sexual performance of a man, instead of the true virtues of manhood like love, respect and self-belief.

While the subject is serious and socially relevant, the film is a laugh riot, connecting you to the subject matter.

Khurrana portrays a man suffering from performance anxiety with great empathy, making him a likeable, everyday hero. His ease in front of the camera is hard to resist. Khurrana again proves why he is the best at portraying relatable characters.

Pednekar plays a distressed but positive and supportive fiancee with simplicity. While she easily fits into the good Indian middle-class girl role, her dialogue delivery and intonation need some work going forward. 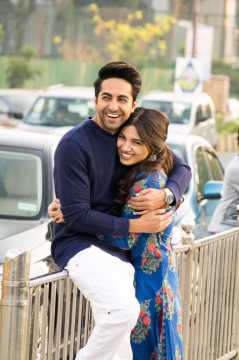 The entire supporting cast is brilliant and lifts the film to great heights. A special mention for Seema Pahwa (Sugandha's mother) who evokes roaring laughter every time she is on screen. Her Ali Baba and gufa (cave) analogy is a hilarious metaphor for the socially relevant message of the film.

The star of the show, though, is the masterful screenplay and dialogues by Hitesh Kewalya. He delivers effective and genuinely funny lines. The repartee among all the characters is brilliantly conceived, giving you tons of laugh-out-loud moments.

The one point of regret is that the film could have met its perfect end if not for the melodramtic climax. Also, an unnecessary scene of Mudit chasing Sugandha with a reporter's commentary in the background and Mudit's mid-air leap could have been avoided.

But with director RS Prasanna's tongue still firmly in his cheek, this is a minor hurdle.

Shubh Mangal Saavadhan is non-preachy, laugh-out-loud funny and entertaining as it explores the subject of performance anxiety and erectile dysfunction realistically, yet hilariously.