The Zee5 film features Urvashi Rautela as a confused young woman who wants to lose her virginity and find love at the same time.

Ajay Lohan’s directorial debut Virgin Bhanupriya (2020) can’t decide what kind of film it should be. Should it be a family drama about a fractured marriage? A comedy about a young woman trying to lose her virginity, or a romance about two very unlikely individuals? It decides to be all of them at once, diminishing all hope of logic thereafter.

Bhanu (Urvashi Rautela) is a college student who seems to have the worst luck in love. When her latest boyfriend is arrested by the police, she decides her love life needs a makeover, as she desperately wants to get rid of her virginity. Her best friend Rukul (Rumana Molla) just believes in hook-ups, and with the marriage of Bhanu's parents (Rajiv Gupta and Archana Puran Singh) in disarray, she has no real guidance on how to handle relationships.

So she deals with a lisping suitor Rajiv (Sumit Gulati) whose mispronunciation of the Citylights (2014) song ‘Muskurane Ki Wajah Tum Ho’ is both unfortunate and hilarious, and gets infatuated with the muscular Shartiya (Gautam Gulati) before realizing what a jerk he is. Eventually, the frustrated Bhanu believes the only way out of her predicament is to get married, though different astrologers have repeatedly warned her that she will never be sexually satisfied once she does!

If that last sentence does not give you a hint of the film’s flawed logic, I don’t know how else to convince you.

However, Bhanu and Rukul, despite griping constantly, have each other's back and, in a way, it is refreshing to see a female character take up some initiative into exploring her sexuality, as usually most comedies have a young man trying to crassly lose his virginity, before discovering love. 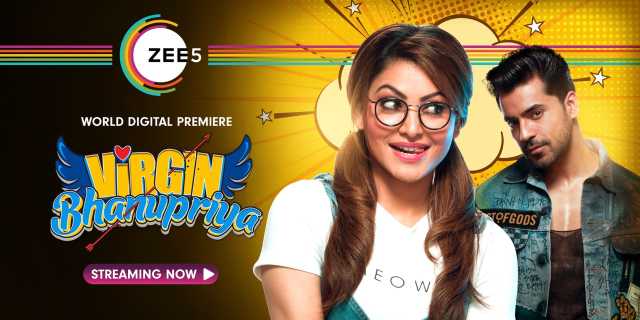 Bhanu is a muddled character who has a hard time being assertive and Rautela’s bland characterization does not help. The rest of the cast are, well, characters themselves. Bhanu’s father Vijay seems to have walked straight out of some WhatsApp group, as he is ever ready with an Urdu poem or some gyan about life and relationships. Her mother Madhu, now separated from the family, has a meltdown in front of Vijay and his girlfriend Moon (Niki Walia).

Early on, an aggressive Rukul barks at Bhanu to stop being so blasé about her virginity; after all, she says, “virginity hai. Rajinikanth ki haddiyaan nahin, jo tootegi nahin.” The screenplay has several such laugh-out-loud moments as each character falls to its lowest point. Rajiv, when getting a love poem written in his blood, insists that ‘wah wah’ be included for some appreciation.

While Gupta, Puran Singh, Gulati and Brijendra Kala (as a cool cop) try to bring some fire to their parts, the rest of the cast blend into one, especially Gulati and his group of friends. But all of it is not their fault, as they are given little opportunity to do justice to their parts. There is also a hasty message thrown in about single motherhood and empowerment at the nth moment, in a bid to redeem Rukul.

The production of the film, from its design to the costumes, feels ordinary. Lohan has little handle on the film or the script as it rushes towards a heady finale — Bhanu’s marriage. But as we near the two-hour mark, the joke’s on us. Unbelievably, a ‘to be continued’ sign is splashed on screen, at which point I did not know whether to laugh or cry. I decided on the former.