Rajnesh Domalpalli's drama not only realistically portrays India's class and caste divide but is also entertaining and occasionally hilarious.

Rajnesh Domalpalli made his debut feature film Vanaja, which was released in 2007 in the United States, as a thesis for Columbia University’s graduate film programme. It was made on a shoestring budget with a cast comprising non-professional first-time actors.

The film is about Vanaja (Mamtha Bhukya), a 14-year-old girl whose mother has died and whose father is a poor, alcoholic fisherman. We first meet Vanaja when she is sitting in the front row with her best friend to watch a dance performance. She is full of life and has just begun to notice the opposite sex. Her whole life changes when a soothsayer predicts that she will become a great dancer one day.

Circumstances force Vanaja to drop out of school to help her father who takes her to an influential landlady hoping that her patronage will pull him out of debt and allow him to buy a new boat.

The elderly landlady, Rama Devi (Urmila Dammannagari), who is a dancing legend, takes the girl in as a maid. With her innocent but mischievous spirit, she persuades Rama Devi to give her dancing lessons. Vanaja excels in the arts under the strict but efficient tutelage of her mistress, who also seems to take a liking to the girl.

Things change, however, when Rama Devi's son, Shekhar (Karan Singh), returns from the US where he was studying, He is being groomed by his for the local elections. Vanaja, who is already curious about her sexual awakening, spies on Shekhar while he is in the shower. Soon sparks fly between the two and Vanaja can't hide her attraction. But Shekhar has an ugly side that he hides behind a charming smile. 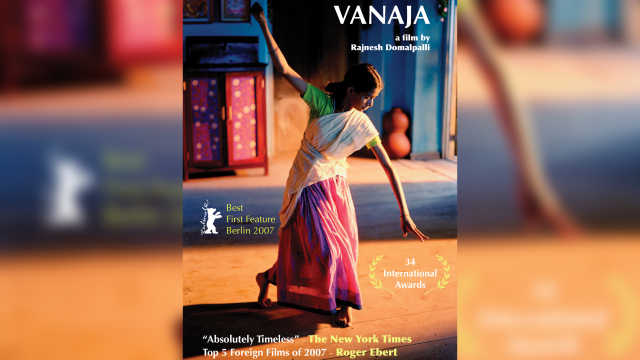 Things get out of control, and Vanaja pays the price for Shekhar's uncontrollable lust. To make matters worse, she gets pregnant. Her father tries to get some money from Rama Devi, but the clash between the rich and powerful and the poor has just begun.

When I was asked to review the movie, I tried my best to avoid it for a simple reason: I didn't want to watch another movie that makes light of the serious issue of the rape of a minor or exploits it. I have never been so happy to have been proven wrong. Vanaja is a complete antithesis of exploitation cinema.

Although it emanates a sense of unhappiness, Vanaja is not a sad melodramatic movie. Domalpalli doesn't bombard us with explicit references to the caste divide. It's ever-present, like the sun, and one doesn't need to constantly mention it to remind the viewer of its existence.

We know Vanaja's life of hardship is imposed on her not just by her father's financial situation but also by their caste. But that doesn't stop Vanaja from finding joy in simple things.

Bhukya plays Vanaja with such effortlessness and finesse that it's impossible to imagine that this is her first film. Her charming presence lights up the screen even when she is doing mundane chores. Apparently, the actress had honed her acting and dancing skills for a year in the director's family's basement!

In fact, all actors were cast for their looks and presence and then trained in an acting workshop set up by the director. Urmila Dammannagari as Rama Devi provides the second memorable performance. She is loving and surprisingly kind but also manipulative. Dammannagari plays this complex role with ease like a seasoned artiste.

Even though he had a minuscule budget, Domalpalli put in a lot of effort to make the film as visually appealing as possible. From the dusty backdrop to meticulously decorated rooms, everything is captured in great detail by Milton Kam's camera.

Domalpalli's film not only realistically portrays India's class and caste divide but is also entertaining and occasionally hilarious.

It's surprising to know that after knocking it out of the park with his very first film, he has not made another one.

Vanaja can be seen for free on the Bandra Film Festival's YouTube channel.

Konda Polam review: A decent film about man and nature

Set in the picturesque Nallamalla forest, the Telugu-language film is centred on a few families of...

For a mainstream political film, Republic doesn’t take the escapist entertainment route to to...

Love Story review: Sensible film on love and the caste and class divide

In spite of the hurried climax and predictable end, the film works because of its sensible treatment...