Part of the 100 Years of Bengali Cinema celebration at the Kolkata festival, Uttar Falguni is a powerful woman-centric film even when it places the central character as a victim of patriarchy.

Uttar Falguni, released on 11 October 1963, was followed by the independently shot Mamta in Hindi in 1966. The two films shared the plot, yet are a class apart. Director Asit Sen saw that audiences in Bengal and Bombay were different and their demands would differ and so directed the two films differently, making changes in the caste, music, costumes and makeup of Suchitra Sen, as well as in the technology and mounting. Uttar Falguni was shot in B&W while Mamta was in glorious, almost loud, colour.

Uttar Falguni was produced by Uttam Kumar who kept away from acting in the film. The original novel was penned by Nihar Ranjan Gupta, famous for his detective thrillers. But he also wrote social novels, and Uttar Falguni was one of them.

The screenplay was by Nripendra Krishna Chatterjee, a noted author in his own right. That was the trend back then, to rope in noted authors to do the screenplays. The film was later presented as a stage play, Pannabai, with Aparna Sen performing Suchitra Sen's roles. The play was a big hit.

The story revolves around a mother and her daughter, both played by Suchitra Sen. The mother’s character is structured dually: first as Debjani and then as the courtesan Pannabai. Once Debjani becomes Pannabai, she refuses to be identified with Debjani even when Manish, her former lover, calls her by that name. She insists Debjani ‘is dead’ and only Pannabai lives on.

As Debjani, Suchitra Sen presented the image of a beautiful young woman very much in love with Manish, dreaming of marrying him when he returns from England after clearing his bar-at-law. The transformation from Debjani to Pannabai is brought across through effective editing and song-bridges with Meena Bai (Chhaya Debi) giving her lessons in song and dance.

In the beginning, Debjani is diffident, shy, and lacks confidence in picking up the nuances of the trade. But slowly she masters the two performing arts of singing and dancing, and becomes a famous kothewali with rich, feudal clients thronging Meena Bai’s kotha to hear her sing and watch her dance. Her daughter, Suparna, is born within this world.

Pannabai spends her free time concentrating on bringing up her daughter. A doctor comes in regularly to check on the girl. Pannabai, along with Meena Bai, takes her to the zoo, to various gardens and to other interesting places to give her as normal a childhood as possible.

Suchitra Sen was not a good dancer and this deficiency was compensated for by the film's beautiful music. The juxtaposition of the mother image and the courtesan image within the same time-space paradigm is convincing. 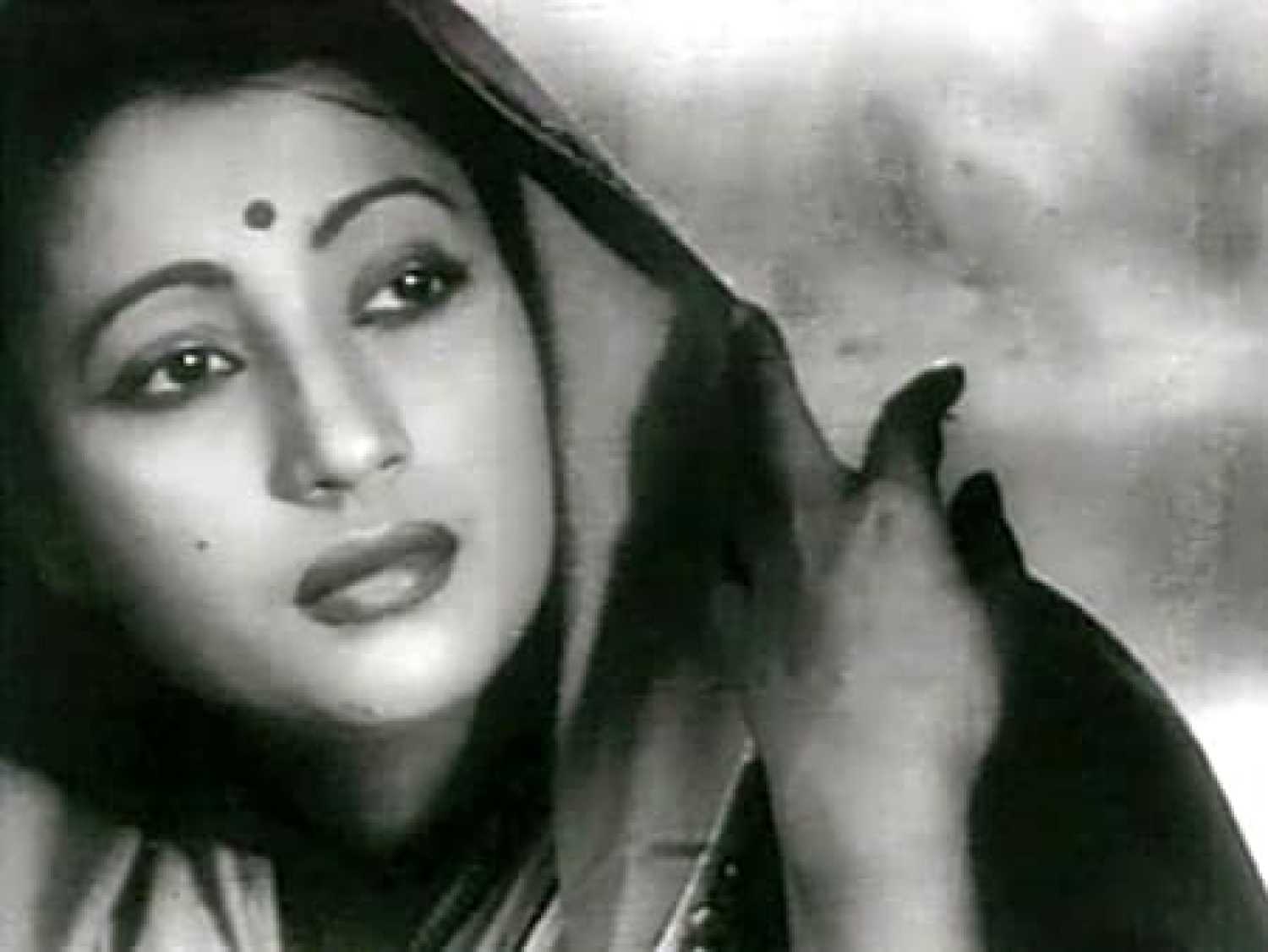 In a touching moment, Pannabai tells Manish that his love for Suparna is selfless; that it expects nothing in return. But as a mother, her love for her daughter is selfish because it is through her daughter that she seeks liberation.

This is one of the core messages in the film — how a mother, almost encrypted into a courtesan’s life, has, somewhere at the back of her mind, a desire for salvation, never mind if it is vicariously achieved through her daughter. The Debjani in Pannabai peeps from behind the façade and the make-up and the heavy jewellery. Debjani is not dead. She lives on wearing a different face — Pannabai.

Suparna, also portrayed by Suchitra Sen, is the dramatic opposite of her mother. The only way to recognize her as Pannabai's daughter is that she is a spitting image of her mother. She is a modern, educated woman who returns after finishing her bar-at-law in England to take up practice as a junior to the ‘uncle’ who adopted her.

While in England, she has fallen in love with a senior, Indranil, who stays over for a year to wait for her to finish her course. Indranil comes to India and joins Manish’s law firm. Suparna does not know her mother is alive, let alone that she is a courtesan, now in retirement. She has no clue that it is her mother who has funded her education. She does not know that her ‘uncle’ Manish, who brought her up at Pannabai’s persuasion, is the man who still loves her mother but could not marry her owing to circumstances beyond their control.

Suchitra Sen does justice to the ‘three’ characters by changing her body language, her way of delivering her lines, her smiles, gestures, tears expressed in minute detail carefully enough to see that the personas do not blur or get out of focus or confuse the audience. The lines between Debjani and Pannabai were deliberately blurred in the beginning and merged to become Pannabai towards the end, reinforcing her insistence that ‘Debjani is dead, this is Pannabai’.

There is a melodramatic romanticization of the kothewali in the character of Debjani-turned-Pannabai, which is a stereotype of Indian mainstream cinema. Note that Pannabai is a courtesan or kothewali and not a prostitute. This means she does not have to sell sexual favours for cash or kind. Her clients are not permitted to directly proposition her for sexual favours, and whether she surrenders to indirect demands is entirely her choice, or that of her mentor in the house.

Her clientele visits Pannabai to entertain themselves with her music and the varieties of wine she can serve, apart from the vicarious titillating pleasure the men appear to enjoy from their visits. There is also a false sense of ‘male prestige’ attached to a man from a feudal family whose regular visits to a given kotha to listen to a particular courtesan or kothewali reflects his aristocracy, his affluence, and his taste for good music and dance.

Suchitra Sen expresses this dichotomy between the courtesan-mother duality extremely well. Whenever she is away from entertaining her clients, she devotes her entire attention to little Suparna; Meena Bai, who rescued the young Debjani when she tried to commit suicide by jumping off a running train while escaping from the wrath of her pimping husband, is now very old and a grandmother-like figure for Suparna and a mother for Pannabai. This affectionate bonding between Meena Bai and Debjani/Pannabai subtly touches on an alternate mother-daughter bonding, offering a juxtaposition between a biological mother-daughter relationship that is divorced from social visibility and a substitute mother-daughter bond that defies biology.

Though Uttar Falguni strongly reflects patriarchal modes of victimization of women, it is a powerful, woman-centric film even when it places the central character as the victim. But Debjani/Pannabai rises above her victimization to take control not only of her own life but, more importantly, of her daughter’s, though she has voluntarily kept away from any direct contact with her during her growing-up years. In this sense, Pannabai remains an absent, almost non-existent, person in her daughter's life.

Under Asit Sen's masterful guidance, Suchitra Sen manipulated her expressions differently through her emotional response mainly as Debjani/Pannabai because the portrayal of Suparna did not demand much change in strategy. It was a flat character infused with a lot of heightened melodrama and fake coyness.

Asit Sen controlled the visual frames with the help of cinematographer Jyoti Laha (Anil Gupta for Mamta), using slow dissolves as transitions between and among scenes. The scenes showing Pannabai shooting Rakhal cuts to a close shot of the bars of a jail cell appearing before her. Even before the first shot fades out, the camera tracks back from the bars and moves to show her with Manish in her cell. The technical mastery added to Suchitra Sen’s performance as Debjani, as Pannabai and as Suparna.

The songs composed by Robin Chatterjee for Uttar Falguni (Roshan did the honours for Mamta) were used tellingly as editorial strategy, as expressing time-leaps in the life of Pannabai and then Suparna, as denoting mood swings and narrative progression.

For Pannabai, the songs served a definite purpose in the narrative. Three classical pieces in the Bengali film deserve mention. The first is when Pannabai is established as a very good courtesan. The second appears in a flashback sequence where Debjani is being trained by Meena Bai and slowly metamorphoses into Pannabai. The third mixes sound with music to enrich the aesthetics of three shots and adds to the mood of the scene.

In the first of these three shots, the music director uses the melodious sound of church bells and mixes it with the sound of thunder and blowing wind, symbolically, with the camera capturing a singing Pannabai in slow dissolves juxtaposed against Suparna and Manish in her missionary residential school.

The second blend of sound and music shows Pannabai singing against a backdrop of dark monsoon clouds, moving on to a leafless tree in the last of these shots as a time-leap showing Suparna growing up and Pannabai slowly greying. This also suggests the radical differences in the evolution of the two women — the mother and the daughter — the latter growing up in a conducive and productive environment created through the sacrifices of the former. The pace and tempo of the classical piece becomes slower towards the end and the camera moves to show a greying Pannabai suffering from a heart ailment.

The drawback lies in the director’s stylising of the court scenes, which are much too melodramatic to fit in with the earlier narrative and also bring the film to a climax that could, and should, have been subtler. Suparna’s sudden turnaround when she learns who Pannabai really is, is not convincing. The splitting of the images — the ailing mother resting against the wooden bars of the court podium and the angry daughter shouting for justice — appear contrived.

Having said this, one must concede that Uttar Falguni remains a milestone in Bengali cinema for the music, the cinematography, the editing and the performance of Suchitra Sen, Bikash Roy as Manish, Chhaya Debi as Meena Bai, and Kalipada Chakraborty as Pannabai’s evil husband Rakhal.

The women in Uttar Falguni are celluloid reflections of women who continue to be shaped by the historically specific, unstable, plastic and malleable character of the sexual identity of their respective cultures, and by patriarchal implications. Suchitra Sen excelled in both kinds of films, and if she appears loud in some films over others, it is the script that demanded her loudness.