Director Aditya Dhar delivers a thrilling action film but, more importantly, it is a fitting tribute to the heroes of the surgical strike and the martyrs of the Uri attack.

Morality may blanch, but in the practical world it’s the an-eye-for-an-eye policy that works. Long seen as a soft target by terrorist groups operating from Pakistan's soil, India showed its aggressive side by carrying out a daring strike inside Pakistan when, in 2016, the government announced that the Indian Army had carried out a 'surgical' strike in Pakistan-occupied Kashmir (PoK) to avenge the killing of 19 soldiers by four Lashkar-e-Taiba terrorists in the Uri district of Jammu and Kashmir. The four attackers in Uri were also killed in the ensuing battle.

The Uri attack and subsequent retaliation earned the Army praise, while the Narendra Modi-led Bharatiya Janata Party government, too, was credited for  mustering the courage to carry out such a task, with no casualties on the Indian side.

Of course, the incident also led to much recrimination by political parties and by retired soldiers who were apalled that the government would go public about an operation of this nature, but the timing of the strike, the swift retaliation, served as a balm to the sapping spirits of the common people who often chaffed at India being seen as a soft target.

If such operations are usually classified, then it begs the question: should one make a film on the surgical strike? That producer Ronnie Screwvala announced Uri: The Surgical Strike just one year after was puzzling at the time. We didn’t get Dawood Ibrahim or Hafiz Saeed, and if this was not the first retaliation of its kind, what made it so special?

The trailer and promos bragged about 'new India', one that will not stay quiet or shy away from taking on the enemy on its own territory. That idea created a curiosity around the film, but, more importantly, director Dhar needed to back it with action.

With the identity of the real heroes rightly kept under wraps, a filmmaker is at liberty to create characters, a special force of his own. So, we have Major Vihaan Shergill (Vicky Kaushal) leading a team of commandos on the operation. Shergill is a seasoned pro, one who had avenged the killing of Indian soldiers by Naga rebels in Manipur. He is forced to take up a desk job in Delhi so that he can look after his mother, who is suffering from Alzheimer's. A personal loss in the Uri attack becomes a strong motive for Shergill to lead the surgical strike.

Now while his characters may be fictitious, Dhar and his team have certainly done their research on the subject. Like in the real incident, Shergill picked his team from the Dogra and Bihar regiments, who suffered losses during the Uri attack. These regiments shared the same hurt and thirst for revenge.

Often Indian cinema’s war films smack of jingoism. Farhan Akhtar’s Lakshya (2004) was, perhaps, ahead of its time, but it won praise for not falling prey to a jingoistic style. Then in 2017, we had Sankalp Reddy’s bilingual The Ghazi Attack that also came as a breath of fresh air. Uri is the latest addition to the list of mature war films coming from the Indian stable. Perhaps, it is the most thrilling such film so far in the genre.

Devoid of jingoism, Uri: The Surgical Strike rides on Dhar’s mature writing, a taut screenplay, and a competent cast. There are no power-punch dialogues, but what we hear is not bland. More than the story, which plays out academically, Uri is rich in atmospherics with its high production values. The combat sequences are shot in the thick woods of Serbia. Having never been to Pakistan-occupied Kashmir, we cannot judge the PoK recreated by production designer Aditya Kanwar and his team. We do see the secret tunnels used by the terrorists to infiltrate India, and the dilapidated structures that serve as homes to them.

Such strikes are mostly carried out at night. Director of photography Mitesh Mirchandani use the darkness effectively and the grim atmosphere only adds authenticity to the combat. The dimly lit houses of the terrorists seldom give you a glimpse of them. The fisticuffs are usually reserved for the final battle between the protagonist and the prime target. Dhar creates a high octane climax sequence, and the Shergill-jihadi bout gets the adrenalin pumping.

The film's songs, and particularly the riveting background score by composer Shashwat Sachdev and the sound design by Bishwadeep Dipak Chatterjee seize your imagination. Sachdev doles out a few inspirational tracks none, more appealing than the rocking 'Challa' war cry. The teaser and the trailer had a gripping rhythm that’s designed using gunshot sounds. Sachdev’s music and background score serve as characters themselves, enriching the visual experience.

If one has never been on the battlefield, then how can one comment on the design of the surgical strike? However, the basic preparation by Shergill and his troops for a sophisticated surgical strike is a little baffling.

Uri was promoted as a film as that will showcase the new, bolder and tech armed India. The strong Indo-Israeli alliance comes to the fore with the Indian army equipped with hi-tech guns, night vision goggles from Israel, and in a first-of-its-kind, we get a view of tiny bird drones, that are shown as a creation of a Defence Research and Development Organisation intern. It sure doffs a hat to prime minister Narendra Modi's Made in India initiative. Uri throws light on the might of new India, the artillery that it possesses.

National Security Advisor and former Intelligence Officer Ajit Doval is a much-feared figure in Pakistan. He was the brain behind the surgical strike. Paresh Rawal’s character Govind ji is very much based on Doval. The former intelligence officer in political and intelligence circles is an intriguing personality. We get to see a few shades of him in Govind ji, a man who breaks his cell phone after every confidential conversation. Rawal chips in with a measured performance.

There is director-actor Yogesh Soman who appears to be playing Manohar Parrikar, the then Union defense minister. Rajit Kapur plays prime minister Narendra Modi. Dhar doesn’t mention their names, they're simply referred to as ‘Sir’. In fact, the end credits only mention Kapur’s character as prime minister.

Modi and the BJP were criticized by the opposition for taking undue credit for the army operation. Was it Dhar’s call to not name them or was it the government that must have politely requested the director to stay clear of mentioning their names?

Kapur looks a better Narendra Modi than Vivek Oberoi, who is set to play the Prime Minister in an upcoming film. Kapur's looks also partly bear resemblance to former prime minister IK Gujral. Modi is flamboyant in his political speeches, but Kapoor shows us a milder, more restrained side to the leader. The actor appears jittery at times and ends up putting up a staged act. On the contrary, it is the actor who plays the then Pakistani president Mamnood Hussain who is more assuring in his role.

Rawal, Satyajeet Sharma, Kirti Kulhari, Yami Gautam are competent, but it’s the bull's show by Kaushal that drives Uri. The young actor has given exemplary performances in films like Masaan (2015), Manmarziyaan (2018) and Sanju (2018). In all these films, Kaushal has come across as an actor who has lived these characters.

Masaan and Manmarziyaan saw him play emotionally riveting characters, while in Sanju, he turned into a funny Gujarati man, called Kamli. In Uri, Kaushal has different layers to him. When Shergill is with his family, he comes across as this soft-spoken, caring son and brother. But once on duty, he transforms into an intense, dutiful soldier. Shergill, the soldier, is like a raging volcano waiting to erupt. But he doesn’t resort to melodrama. Shergill channelizes the rage within and only exults after victory is achieved. Kaushal’s sturdy look and bulked up frame is matched by a powerful act too. Remarkably, Kaushal played a soft-spoken, adorable Pakistani soldier in Meghna Gular’s Raazi (2018), Uri marks a happy homecoming for the talented actor. 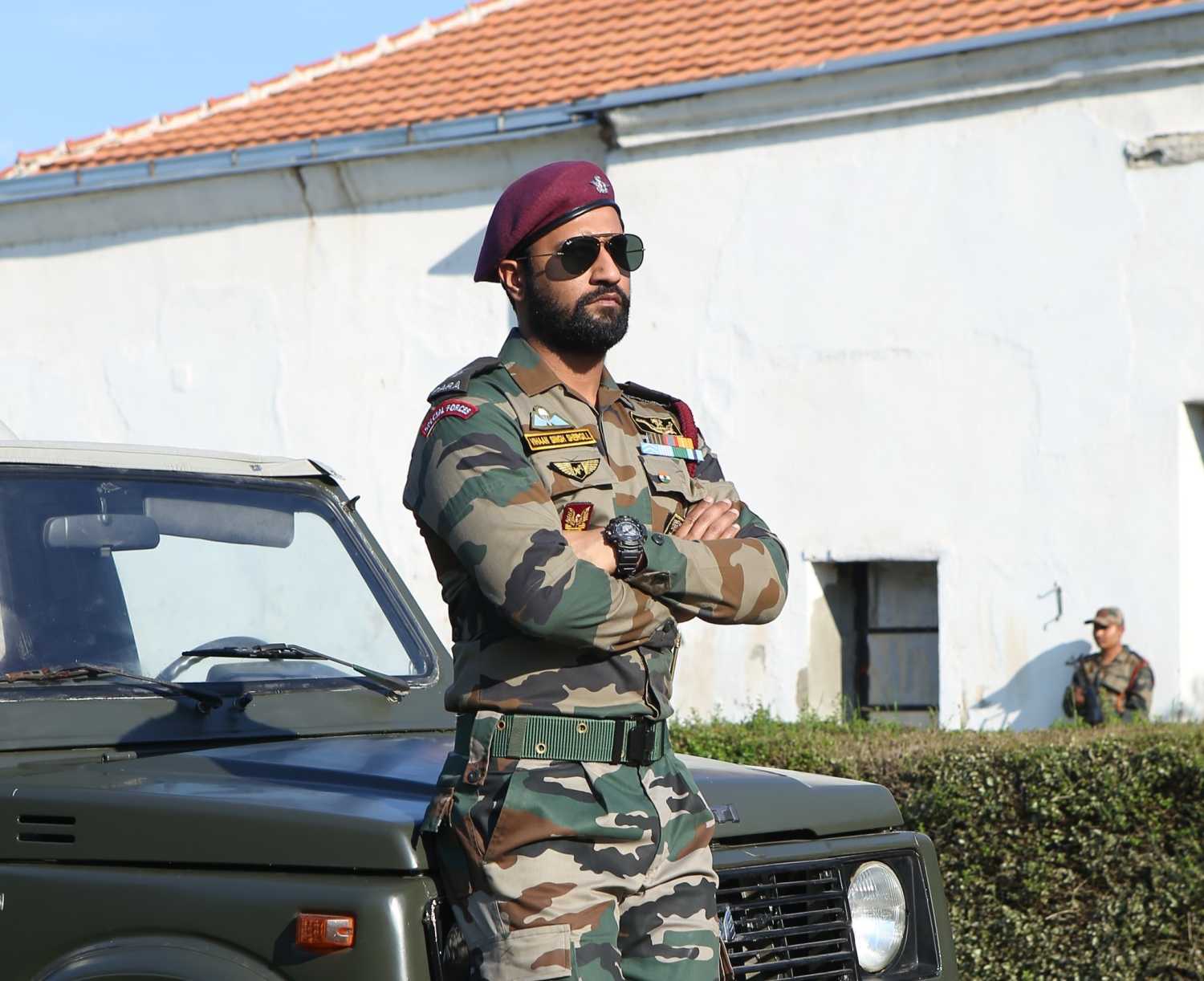 The other actress who pleasantly surprises is Yami Gautam. She had shown great promise with her maiden Hindi film Vicky Donor (2012). Uri is a  reminder that given the right role, and managed well by the director, Gautam can do justice to such characters.  Kirti Kulhari has a special appearance but she delivers the all-important crucial blow to the enemy.

Dhar’s Uri is not all about the battlefield, but it has family drama too. Perhaps, there is little melodrama to it, and maybe the Shergill family story could have been trimmed a bit.

Also, the surgical strike was carried by different teams across different terror camps in PoK. Dhar only depicts the operation by Shergill and his team. An operation like this cannot be carried out without having moles in the enemy state. The true nature of the operation, intelligence input will never be known, but you do wonder whether Dhar puts the Pakistani sources at risk by playing out their part. That should have been curtailed. Rakesh Bedi and Rukshar play their small, but pivotal parts to the T.

The few flaws don't hurt the film. It's very difficult to get a realistic account of such operations, but Dhar succeeds in creating a thoroughly gripping, thrilling drama but more importantly Uri is a tribute to the real heroes of the surgical strike and the Uri martyrs.