The series improves upon its predecessor, with the shorts directed by Nagraj Manjule and Ayappa KM, in particular, standing out.

As we enter year three of the pandemic, with no end in sight, the Amazon Prime Video anthology series Unpaused: Naya Safar (2022) is likely to find two sorts of audiences — those who want no reminder of the ongoing crisis and those who will watch it so as not to forget.

While their stories might be fictional, filmmakers Nupur Asthana, Ayappa KM, Ruchir Arun, Shikha Makan and Nagraj Popatrao Manjule have imbued their shorts with verisimilitude. The show's predecessor Unpaused (2020), directed by Raj & DK, Nikkhil Advani, Avinash Arun, Tannishtha Chatterjee and Nitya Mehra, were appealing tales of loneliness and anxiety amidst the pandemic; but looking back, the stories don’t feel as impactful as the tales from this collection.

Unpaused review: A sparkling collection of stories about humanity and camaraderie in an age of paranoia

Asthana’s The Couple puts under the microscope the work-from-home lifestyle of Akriti (Shreya Dhanwanthary) and Dippy (Priyanshu Painyuli). Always on plugged in, they manage to balance work and their married life, until one day when Akriti is laid off unceremoniously over video chat.

Her self-esteem takes a beating and exposes the inequality in their relationship, causing unhappiness. The Couple raises important points about the gender divide while working from home, but also shows the privileged position they share, while still being secure in their environs.

Dhanwanthary and Painyuli are convincing as upper-middle-class married professionals in Mumbai who still have a lot of lose, and they salvage their relationship in a plausible manner.

Ayappa KM’s episode, War Room, focuses on a lonely widowed maths teacher, Sangeeta Waghmare, who works at one of Mumbai’s helpline centres that assist citizens facing COVID-related crises. Geetanjali Kulkarni is instantly believable in whichever project she’s in, and here, she is rocked by a name from her past when contacted at the war room.

Frazzled, she breaks protocol and is reprimanded by the medical staff manning the centre. Sangeeta is hiding a painful trauma involving her young son Uday who had a promising future ahead of him. Kulkarni deftly puts across her character’s dilemma, eliciting both sympathy and empathy

Plagued by a constant shortage of resources and being perpetually subjected to photo opportunities involving politicians, war room employees are overlooked ‘corona warriors’ who thanklessly hear out and deal with worried patients and their families. Ayappa KM, who has also written the segment, along with writers Anand Menon and Shubham, makes sure we won’t forget Sangeeta so easily. 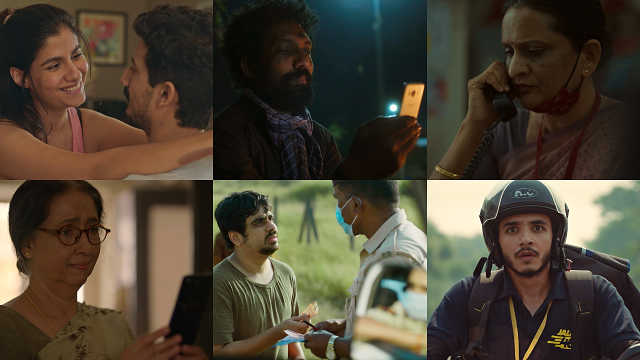 In Ruchir Arun’s Teen Tigada, Chandan (Saqib Saleem), Dimple (Ashish Verma) and Ajeet (Sam Mohan) are an odd trio who are stranded together with some stolen cargo in an abandoned factory during the lockdown that was imposed amid the second wave in 2021. Possessing bare essentials and little food, they turn on each other quickly.

The actors bring out their characters’ frustration at being stuck in a strange sort of purgatory waiting for money that doesn’t materialize. Unfortunately, the story and screenplay by Arun and Abhinandan Sridhar don’t go anywhere except in circles. After the high of the War Room, this episode grows stale quickly.

Gond Ke Laddu by Shikha Makan is also disappointing. Set outside Mumbai, it is centred on the elderly Sushila Tripathi (Neena Kulkarni) who lives by herself far away from her daughter Ritu who has just given birth. Braving the digital world, she books a courier appointment to send a box of laddoos to Ritu. Her courier Rohan Sahota (Lakshvir Singh Saran) is behind on his deliveries and star ratings and needs to complete all his tasks in under 48 hours to redeem himself.

Predictably, he gets into an accident and his wife (Darshana Rajendran) must save the day with some out-of-the-box thinking. Makan’s tale rings false despite having sympathetic characters like the out-of-luck gig worker from a social stratum that is still reeling under the pandemic. The connection made between Rohan and Sushila also feels inauthentic somehow. 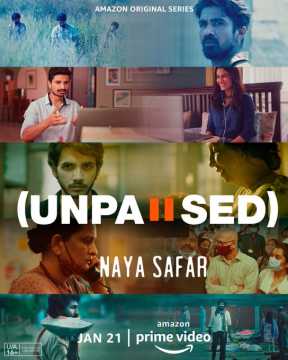 The final episode in the Naya Safar is the most hard-hitting and comes from accomplished filmmaker and actor Nagraj Popatrao Manjule who plays a crematorium worker named Vikas Chavan. Vikas, also known as Ekya, toils hard from day to night at the Vaikunth (heaven) crematorium during the deadly second wave as body bags keep arriving, and ashes keep piling.

Vikas constantly worries about his elderly father (Hanumant Bhandari) who is hospitalized with COVID-19, and his young son Avinash (Arjun Dattatray Karche) who adores his grandfather. The Chavans, despite being negative, are thrown out of their little room by the landlord and take up residence at the crematorium.

With minimal dialogue, Manjule depicts the depressing grind of Vikas’s life, which is steeped in death, which his family members struggle to come to terms with. Vaikunth unflinching portrays the distressing stories we shut out during the second wave when crematoria were choked with corpses, and bodies were tossed in rivers. The crematorium workers have little protection, no protective suits or fancy masks, yet do their job without a word of complaint.

There’s a wonderful scene when Vikas is walking home at night and is stopped by a policeman for breaking the curfew. Just minutes earlier, the officer was brought tea and snacks by thankful citizens. But who has a thought to spare for crematorium workers who have been toiling away to give the deceased a dignified send-off? Manjule and his co-writer Sudhir Kulkarni.

Vaikunth is deeply poignant and the ending made me emotional and weepy, and also grateful that we have Manjule around to tell these kinds of essential stories.

Unpaused: Naya Safar improves upon its predecessor by focusing its lens on citizens from all walks of life and whose struggles would hit home for many. The tales of loss, family and hope from the pandemic are a reminder that we will endure in the end.

Unpaused: Naya Safar is being streaming on Amazon Prime Video.