Though it is mostly well intentioned, Pathak's film at times exchanges sensitivity for humour.

Taking a week's head start over its rival, Bala (2019), the Sunny Singh Nijjar-led Ujda Chaman holds up a mirror to social perceptions of beauty. Starring Sunny Singh and a wonderful Maanvi Gagroo, the film has substance underneath the raucous humour.

The unfortunately named Chaman Kohli (Sunny Singh) is a 30-year-old Hindi professor struggling to end his singledom. Frustrated by the rejections and insults thrown at him at every attempt at an arranged match, and at his own non-existent charm, Kohli finally turns to the medium of online dating.

Except that he is bound in his own beauty biases to recognize the love that comes his way. While Apsara (Maanvi Gagroo) offers him unconditional love, he turns away from her owing to her appearance.

An official remake of the 2017 Kannada sleeper hit, Ondu Motteya Kathe, Pathak transports the film to Rajouri Gardens in Delhi. In doing so, the director imbues the film with the extroverted Punjabi humour and sensibility. While it is funny, the overt positioning of the humour also feels insensitive at times. The film also deviates from the main plot to ocassionally focus on externals. A shorter and tighter script would have helped.

Screenwriter Danish Singh and director Pathak spend quite a bit of the first half establishing the institutionalized bullying that Chaman Kohli and his ilk face in our society. To do so, they create caricatures instead of characters that do not stay with you beyond the punchline. Thus, the film reinforces the very bullying that it seeks to satirize.

The film, unconsciously, reinforces toxic masculinity through the characters of Kohli's father, friends and neighbours. While it is not new, it could have been addressed better.

There are several points in the story where the actions of characters depart from natural instinct. One instance is the wig. For an insecure bald man, it would take an extreme act of confidence to wear a wig to work, where everyone knows and is familiar with your baldness.

Also, while professors are usually docile, it is hard to believe any professor who is bullied as much and does not take serious action. Moments like these take away from the otherwise enjoyable film. 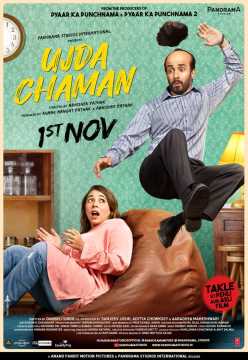 The film improves considerably with the arrival of Maanvi Gagroo's Apsara. Well-written, subtle and with a higher emotional quotient than other characters, Apsara is the conscience keeper of the film. It is in the second half that the dramatic heft of the movie truly comes through and makes an impact. As the woman who has been bullied for her weight, she is understandably empathetic towards Kohli. It is there that the true nature of Kohli's own bias comes through.

Sunny Singh plays Chaman Kohli with restraint. The actor portrays the repression and envy in Kohli well. But he fails to bring on the heavier dramatics needed for his transformation arc. In contrast, Maanvi Gagroo brings a delightful sensibility and presence with her Apsara. Her composure and genial presence also help to lighten the movie's load. She, oftentimes, comes across as the most mature character in the film.

Atul Kumar and Grusha Kapoor as the doting parents are good. Kapoor, in particular, is entertaining as the loving, but overbearing, Punjabi mother who can see no wrong in her child. Saurabh Shukla, who is also a supporting actor in Bala, makes an appearance as the canny astrologer, bringing some more humour to the game. Sharib Hashmi adds to the story with a short and sweet role.

Aishwarya Sakhuja and Karishma Sharma play the women on the other side of the beauty scale. Both characters are enjoyably Machiavellian in their nature, although their storyline is sometimes unconvincing.

Ujda Chaman is the first of two Hindi films to tackle an issue that is widespread but rarely spoken of. While Hollywood has always had Jack Nicholson, Yul Brynner and Henry Fonda who have flaunted their receding or non-existent hairlines on the big screen, Hindi cinema has chosen to stick with an idealized portrait of male beauty. Abhishek Pathak's film tries to poke a hole in the dream. While it fails to make a proper dent, it is a step in the right direction.

Ashwiny Iyer Tiwari's feature bundles up warmth, emotion and laughs to bring a honest, story of...

Without the dance sequences, Street Dancer 3D, starring Varun Dhawan and Shraddha Kapoor, would have...