For the entire first half we just see how Master is positively affecting the minds of the keen learners even as we wait for something substantial to happen.

Credited as director, producer, story and screenplay writer and dialogue co-writer, Pushkar Shotri has a lot on his plate. He sets out to make a heart-warming film stressing the importance of education. Shotri ably uses Master (Sarang Sathaye) to cultivate a scientific temper and hunger for knowledge in the young impressionable minds of Dhoblewadi.

Master is not your usual, uninterested, corrupt, stereotypical village school teacher. He has unique ways of explaining academic concepts. He uses inspiring stories, props easily available in the village, riddles that make them think, and, most importantly, a belief that the children deserve better.

The children reciprocate with keen interest, displaying their new-found knowledge by practical experimentation, often running into trouble with the villagers, and Sarpanch, or headman (Shashank Shende). Sarpanch believes it is a waste of government funds to run a school for a handful of children. He would rather have the school shut down and send the interested kids to a school in another village many kilometres away.

As Master flags the looming problem, the kids take it upon themselves to save the four walls that give flight to their dreams. They are driven by the Ubuntu (humanity) philosophy Master has told them about, quoting Nelson Mandela. They go about doing good in their own ways.

Things take a turn for the worse when Abdul (Atharva Padhye), the brightest of the lot, is pulled out of school and sent to Sangli as a child labourer. His sister Salma, too, leaves school as she is betrothed to someone. The other children hatch a plan to bring Abdul back as Gauri (Bhagyashree Shankpal) and Sanket (Kanha Bhave) reach Sangli to find him without telling their parents. The director does a good job conveying the anxiousness the unprepared kids display the moment they step out of the state transport bus.

Will they find Abdul? Will they save their school? What about Master and Sarpanch? 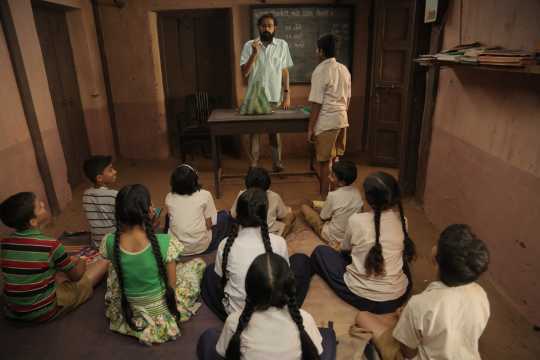 Writer Shotri takes his time to establish his story, almost the whole runtime of 114 minutes. For the entire first half we just see how Master is positively affecting the minds of the keen learners as we wait for something substantial to happen. Things start rolling only in the second half as Gauri and Sanket get on that bus to Sangli. The whole film gives the feeling of something being amiss.

Shotri makes a case for education, but, sadly, meanders through the film, saying the same things over and over again, as if the audience consisted of a bunch of slow learners. The film is shot slickly, Suman Sahu’s camera capturing the rural flavour. However, a tighter leash on the editing table could have saved Shotri’s effort from being diluted. The film suffers because Shotri fails to add depth to the very characters he wants us to sympathize with. Barring Abdul, you fail to connect with any of the kids.

The beautiful songs (often preachy) add to the mood of the film. Shrirang Godbole’s lyrics for ‘Hich Amuchi Prarthana’ are metaphorical, while Sameer Samant tries to explain the meaning of Ubuntu in the title track.

While Shotri’s intentions are noble, his efforts fall short in making Ubuntu memorable.