Torbaaz review: Predictable drama of a man seeking hope and redemption through cricket and a young team of refugees

The feature film, co-written and directed by Girish Malik, hits on all the usual clichés and tropes while sending across a message of hope and peace.

Sanjay Dutt plays a man trying to heal his own wounds by finding purpose coaching a ragtag team of cricket players at an Afghan refugee camp near Kabul. Dutt’s Nasser Khan is grieving the death of his wife Meera (Priyanka Verma) and son Aryan (Preet Bhanushali) after a suicide bombing in the market.

The Netflix film, co-written and directed by Girish Malik, highlights the use of children as suicide bombers by Islamist terrorists, in this case, the Taliban in Afghanistan. Torbaaz opens with a brief history of the terrorist attacks in the region before zeroing in on Nasser’s return to the Tomorrow’s Hope refugee camp set up by his late wife.

Though initially reluctant, Nasser decides to stay and help train and coach the refugee boys from Afghanistan and Pakistan into promising cricket players. The ex-army doctor in this film set in 2018 is inspired by the winning trajectory of the Afghan national cricket team whose story lifted up an entire country and, indeed, the world.

While most view the refugees as terrorist sympathizers, Nasser tries to prove them wrong by setting up a prestige match for Team Torbaaz (meaning eagle) against the Kabul Cricket Club. The most talented boys are chosen, including the acerbic Gulab (Rudra Soni) and his feisty sidekick Sadiq (Rehan Shaikh). But Nasser believes the quiet Baaz (Aishan Jawaid Malik) shows more promise.

Enter Rahul Dev, appropriately menacing as Taliban leader Qazar. He trains and brainwashes child bombers to do his dirty work and reels Baaz and his friend Bakht (Mohammed Khairkhan) and Khosh Bakht (Hamid Shafi) back into his fold. 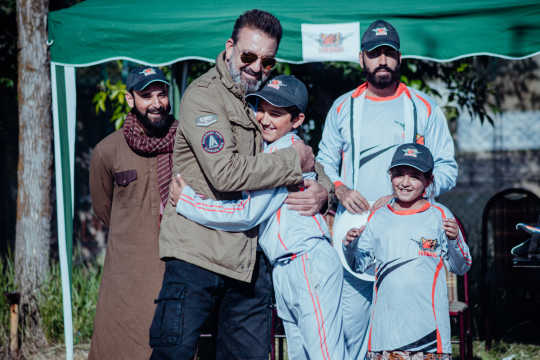 With Nasser’s dream of an optimistic future for the team threatened, he goes and does the last thing he is supposed to — he negotiates with terrorists. “The world is watching,” he reminds Qazar, playing right into his hands.

Torbaaz, though well-intentioned, is plagued with the usual clichés and tropes of a film that addresses terrorism. The choppy narrative, aided by a jumpy edit, doesn’t help matters. The film devotes too much time to certain plotlines while glossing over others.

While the children, especially Malik and Shaikh, are spirited and endearing as they grow as players, Dutt is oddly unbalanced in his performance. He is strong in some portions while lacking conviction in others. Nargis Fakhri has a brief role as Meera’s friend Ayesha, who runs the NGO.

While many portions of the film grow tedious, Torbaaz perks up with the high-stakes match between the young players that, again predictably, ends in a tight finish. However, the film’s hurried ending takes away the warm glow of the game and leaves us looking around for something more engaging.