The Fahadh Faasil-starrer has a bit of everything — pathos, humour, suspense, moderate drama and realistic action.

Actor-turned-director Dileesh Pothan’s second feature is a simple narrative with multiple tales. It speaks of the issues of caste, unemployment, the fear of the police officials and the adamance of a thief.

Suraj Venjaramood (as Prasad) and newcomer Nimisha Sajayan (as Sreeja), from different castes, elope and buy a piece of land to earn a living by growing tapioca. Turns out that the land has no water supply and a well needs to be dug. With no money in hand they plan to sell Sreeja’s gold wedding chain to meet the expense.

However, while on the bus, a thief (Fahadh Faasil) steals the chain and gobbles it down. Sreeja catches the thief red-handed, but her problem is that she has no witness. Post a brief ruckus in the bus, it is driven to the nearest police station.

The real story begins from here. While the thief, who even steals Prasad’s name, is adamant that he hasn’t robbed the chain, Sreeja is confident her chain is in his stomach. An X-ray of the thief’s abdomen reveals the chain and Prasad is given the task of feeding the thief at his own expense, and the police take the charge to check what he excretes every morning. While the couple’s worry is mixed with despair as the thief gets a good thrashing, the police is wary that the case might get out of hand and put them all in trouble.

The three protagonists, Suraj, Nimisha and Fahad are convincing and have the ability to lead the story. Suraj plays the simple forgiving man who you would never find in a scuffle. Nimisha’s character is headstrong and confident, with no tolerance for nonsense. Fahad, as the thief, believes in not giving up until the very last moment. Though he means trouble to the rest of the characters in film, you cannot hate him. Behind that wicked smile and the brown eyes, there is always the hint of a man wanting a better life.

The contribution of the rest of the actors in the film, from the police officers to the villagers, is commendable. They provide the perfect platform for the protagonists to play on. 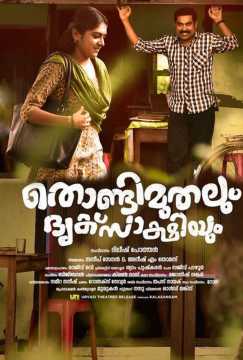 Written by Sajeev Pazhoor, the dialogues are crisp and minimum. Editor Kiran Das has maintained a linear flow. With no complexities, the scenes seep in you, leaving you curious to know what will happen next. Composed by Bijipal, the film has three songs, all of which are aptly placed at the key points in the plot and help set the tone of the story.

Overall, the film has a bit of everything — pathos, humour, suspense, moderate drama, and realistic action. Thondimuthalum Driksakshiyum is worth every penny.

Thondimuthalum Driksakshiyum was screened at the International Film Festival of Kerala (IFFK) 2017 in Thiruvananthapuram.