Director Subash Sahoo explores what made Mangesh Desai indispensable, with many interesting anecdotes from people who worked with him and ample video footage for support.

The Sound Man Mangesh Desai is a portrait of the sound recordist who put an indelible stamp on Hindi cinema through his vision and deep understanding of the craft and art of filmmaking.

The documentary by sound designer Subash Sahoo begins with a sketch by animator Ram Mohan, depicting a scene outside a Mumbai recording studio in the 1960s. In the sketch, a petit Desai is at the centre with prominent producers and directors surrounding him with their hands folded. The sketch sets the tone for the rest of the documentary, which explores why Desai wielded such power during the course or his career from the early 1950s to 1985. 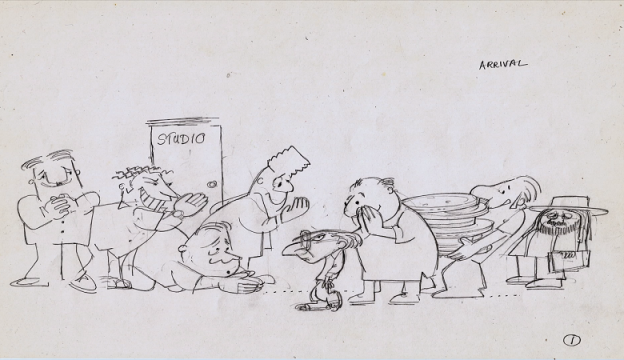 Sahoo depicts how, instead of settling for what is easily achievable, Desai worked tirelessly to set higher standards in sound recording in times of magnetic tape, which required one to be quite meticulous.

“In my 20 years in the film business, there are very few people I can think of who are indispensable. If anyone fully deserves that epithet, it is Mangesh Desai,” Ray, who has worked with Desai on films like Sonar Killa (1974), Shatranj Ke Khilari (1977), among others, in a letter.

Desai's portrait is painted rich with colourful anecdotes by a whole list of people who have either worked with him or have come in close contact with his genius. Manoj Kumar, Subhash Ghai, Shyam Benegal, Mahesh Bhatt, Pandit Shivkumar Sharma, Kiran Shantaram (whose father V Shantaram worked with Desai), Prahlad Kakkar, Vidhu Vinod Chopra, Sandip Ray (son of Satyajit Ray who has worked with Desai on several films) Randhir Kapoor,  Resul Pookutty, Vanraj Bhatia and old video clips from Yash Chopra piece together Sahoo's narrative of how Desai's contribution shaped the soundscape of Hindi cinema.

The tales include how Desai added the iconic train whistle in 'Chalte Chalte' (Pakeezah, 1972), introduced the woodpecker’s sound in Shyam Benegal’s Ankoor (1974), switched speakers during the film’s coin toss shots in Sholay to create the effect of an echo and created the sound of splashing water in V Shantaram’s Chaani (1977) by placing a microphone in a bathtub. The director manages to put together ample amount of footage from these films to make the stories interesting to hear and watch.

Sahoo also touches upon how his obsession with his art and his frank way of speaking has lead everyone, including his staff and some of the biggest filmmkakers, fear and respect him.

Apart from his career, there are also revelations about his personal life as seen through the eyes of his younger brother, daughter and son.

The director also explores Desai's little known side — his involvement in the Indian Independence movement before he became a sound recordist, for which he served four years in jail. Desai, a chemistry student, would make crude bombs in college.

Sahoo manages to paint a wholesome image of a diminutive looking genius who became indispensible to the Hindi film industry. Everyone wanted to work with him as Desai was, and perhaps is, the only one who made such a huge impact on Hindi cinema's soniscape.