The National award-winning documentary, filmed over three years by brothers Vijay and Ajay Bedi, highlights these interesting creatures that reside in the dense forests of India.

Amphibians have never been this engrossing on screen. The National award-winning documentary, The Secret Life Of Frogs, takes us above and beyond what we have seen before to document the once hidden lives of the first terrestrial creatures on Earth.

Filmmaker twins Vijay and Ajay Bedi, themselves third-generation wildlife film directors, accompanied by scientists, travel to the forests of India from the Western Ghats to southern India to find these elusive species. With as many as 138 frog species residing in our rainforests, the Bedis zero in on some worthy candidates for exploration.

We get a closer look as the male torrent frog woos the female through an almost balletic foot-flagging move to gain her attention. The male also has an impressive fight on the rocks to dissuade and eventually kick away another male hopeful vying for the female.

In central India, the Bombay Night frog is the only amphibian with diamond-shaped irises. The makers are able to catch footage of their mating behaviour for the first time on camera.

But the star of the documentary is the purple frog, whose existence is said to go back to the time of the dinosaurs. The unusual looking frog, whose appearance reminds you of a sumo wrestler, burrows itself underground for most the year, emerging during the monsoons to mate.

The film captures a rare look at how they mate and eventually lay their eggs in the water. The makers follow the tension that this whole exercise involves, from the threats nature itself brings by way of a muddy spring to predators lying in wait to eat the eggs.

Besides giving an insight to the habitat and lifestyle of the diverse frog species, The Secret Life Of Frogs also highlights the different ways in which the amphibians are threatened, through climate change and delayed rains, and through continued human cultivation and use of pesticides. 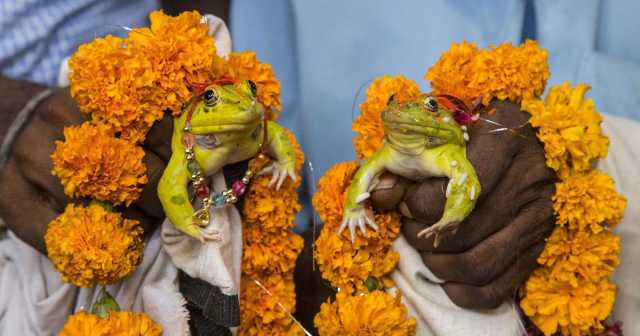 An amusing ritual is filmed when two frogs are married off in holy matrimony to each other in one Indian village, in the hope of appeasing the rain gods. Surprisingly, it does rain afterwards. The poor bewildered frogs bear it all until they are thankfully released back in the water.

Other species of frogs are not so fortunate. The tadpoles of the purple frog as gathered away by humans as a delicacy, another manner in which the species is threatened.

With high-definition, colourful visuals, and intrepid sound design, the Bedis bring attention to the simply fascinating inner lives that these frogs lead in the 54 minute documentary. We may not have given them a second thought before, or even wondered how their habitats might be like, but The Secret Life Of Frogs allows us to be spectators on the journey of this little but mighty forest creatures.

The Secret Life Of Frogs was screened in the International Competition section at the 16th Mumbai International Film Festival on 2 February.

Wanphrang K Diengdoh’s film is an experiment in genre and form, blending history and modernity...