In spite of the underwhelming end, there is much to like in the web-series and how it builds some solid cliffhangers in each episode.

It is essential for any crime thriller or murder mystery to work in a wholesome manner; it needs to have a solid payoff. Tamannaah Bhatia’s November Story, a well-written, slow-burning thriller, has pretty much everything needed to stand out but is let down by an underwhelming payoff. Nevertheless, it is a show that deserves a lot of praise, especially for the writing, which succeeds in keeping one hooked from the first episode. In spite of the disappointing end, there is much to like in the web-series and how it builds some solid cliffhangers in each episode.

Bhatia plays Anu, daughter of India’s best crime novelist Ganesan. Anu works as an ethical hacker while trying to look after her father who is suffering from Alzheimer’s. She is also trying to sell a house without his knowledge.

One day, Anu finds a woman whom she had briefly encountered the same evening in a train killed in the house she has been trying to sell. Her father becomes the prime suspect in the murder. As the doting daughter, Anu has to prove her father’s innocence and at the same time find out who actually killed that woman. 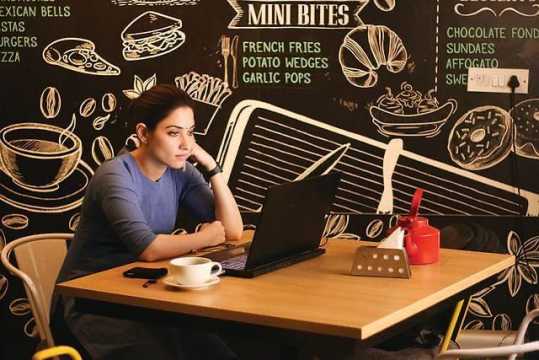 November Story unravels very slowly, and its pace is an issue at times. But what keeps one engaged is the gripping screenplay that beautifully weaves together a web of incidents to produce something worthwhile.

While the show is a murder mystery, it also tries to lighten the mood with some comical moments in the police investigation, though, at times, these scenes do spoil the overall mood of the show. Some scenes featuring Aruldoss as the investigating police inspector are downright funny but just as silly otherwise. You start to wonder why even bring in a comedy element in a show that rests heavily on building suspense with twists and turns.

Bhatia plays her part well, though there are moments when she feels clueless. This is definitely one of her better performances. Pasupathy, who handpicks his roles with precision, is one of the best casting choices and the show takes off the minute he enters the frame. He plays Yaesu, a coroner with shades of grey.

Vivek Prasanna and GM Prabhu add weight to the narration as members of the supporting cast. Vidhu Ayyanna’s cinematography is top-notch, and some visuals are truly haunting. The writing, for the most part, is competent and one can’t find fault with it until the climax, which is needlessly long-drawn-out.

November Story, despite its flaws, is an excellent show that should encourage more web series to get made in Tamil.

By taking a predictable path to handle the premise of a husband stuck in an uncomfortable situation...

Mari Selvaraj’s Karnan, which features Dhanush in one of his fiercest roles, is a bold of a...

The film makes for an intriguing watch because its script displays a deep understanding of caste...