Director Jonathan Augustin brings forth a stellar story of a reluctant lift boy, weaving it with the themes of selflessness and hope.

The minimalist painting of a lollipop seems like the only bright spot in what is quite a dispiriting workplace — a lift. The gloominess of the lift is not lost on the protagonist, Raju (Moin Khan), who is forced to fill in for his ill father. It is in stark contrast with the gleaming floors and posh residents of the building this lift is in.

Krishna Tawade (Saagar Kaale) works as a lift man at Galaxy Apartments (is there a Salman Khan reference here or are we reading too much into it?). When he suffers a heart attack while at work and is admitted to the hospital, his son reluctantly steps into his father’s shoes (err, lift). An aspiring engineer, Raju detests this decision as much as the job, but it’s a temporary arrangement and soon he can go back to being an engineer once he clears an exam in the fifth attempt.

The film beautifully explores the friendships Raju develops in his short stint as a lift boy. Prominent among these is with Princess Kapoor (Aneesha Shah), an 18-year-old pushed into impending stardom by an ambitious mother with Bollywood dreams, and Mrs D’Souza (Nyla Masood), an artist and childless widow, who owns the building. As Raju spends time with Mrs D’Souza, layers of connections that go back in time are gracefully revealed.

In a conversation with Mrs D’Souza, Raju mentions his interest in literature. He kills time reading The Great Gatsby, and as his friendship develops with Princess, they hang out in the lift, talking about their interests and dreams. Mrs D’Souza volunteers to teach Raju the subject Engineering Drawing after his shift and they develop a close bond.

Jonathan Augustin’s debut feature film The Lift Boy is carefully crafted. The screenplay moves at a gradual pace, and the visuals are easy on the eye. He lists Wes Anderson among his inspirations in his LinkedIn bio and the influence is unmistakable.

Flat compositions, long, wide takes, bright colour palettes and a symmetry can be noticed in the cinematography. He avoids awkward angles, giving the impression of the straightforwardness and simplicity of the story. How different can you show a lift? And so he resorts to intersperse these with shots and timelapses of Mumbai’s iconic spots like the Bandra-Worli Sealink, Carter Road and Bandra Bandstand. 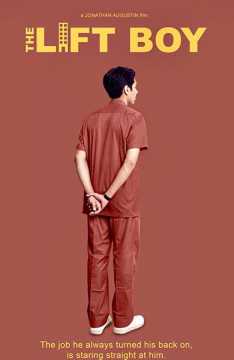 In one scene, Mrs D’Souza and Raju are sitting across each other, sipping tea from yellow mugs. Behind her is a painting of the same mugs she made the night before. The composition is so simple, yet so effective. Even Raju’s house, that has no furniture, rooms or partitions, is captured in the same way.

The Lift Boy is appealing not just visually, but also because of its characters. Not much time is invested to introduce them, but they grow on you. Nyla Masood as the confident and articulate Mrs D’Souza is a revelation. She has been a costume designer in Hindi films for many years and this is her debut as an actress. She’s magnetic and owns her character. Her display of vulnerability as she talks of her dead husband and why she’s fond of Raju, moves you to tears.

Moin Khan as Raju is believable as a kid stuck between his own dreams and that of his middle class parents. Sagar Kaale who plays the lift man is real, and his conversation with Raju where he drops truth bombs about “job satisfaction” is memorable. Neha Bam (who plays Raju’s mother) and Aneesha Shah are natural.

The one unforgettable character in The Lift Boy is Shawn, who plays Raju’s college friend. His lines are the funniest and he’s a version of the 'Bangali Baba' ads you see in a Mumbai local — he has a solution for every problem, even those that haven't arisen.

The Lift Boy has a few flaws — the biggest among them is the convenience with which Mrs D’Souza learns Engineering Drawing in just one night and is ready to teach Raju. Perhaps, this is a liberty taken at the editing table but becomes a glaring flaw on the big screen. Otherwise, the cuts are clean and help keep the narrative crisp.

The Lift Boy is funny, heart-warming and entertaining all the way. Do not miss it.

The Lift Boy had its Mumbai premiere at the 9th Jagran Film Festival 2018 on 27 September.

Wanphrang K Diengdoh’s film is an experiment in genre and form, blending history and modernity...