The Fame Game review: Madhuri Dixit leads intriguing but clichéd drama on the hidden life of a movie star

The glitzy thriller, created by Sri Rao and co-directed by Bejoy Nambiar and Karishma Kohli, is a lavishly produced web-series that examines the not-so-perfect lives of the rich and famous.

Is it possible for a film star to simply vanish without a trace, stumping the authorities, in this day and age of social media and 24-hour news cycles? The Netflix series The Fame Game (2022), created and written by Sri Rao, certainly thinks it’s possible.

Madhuri Dixit plays Anamika Anand, a film star who disappears the night after a high-profile public appearance. Her husband, children, mother and adoring fans have no clue of her whereabouts as the authorities, led by police officer Shobha Trivedi (Rajshiri Deshpande), look into every aspect of her life, personal and professional.

As the police dig deeper, we realize that Anamika's supposedly close-knit family has a lot to hide. Her domineering mother Kalyani (Suhasini Mulay), who pushed her into films, still disapproves of her daughter’s actions. Her husband Nikhil More (Sanjay More) is producing her latest film Hasrat, keeping the true state of their finances from her. 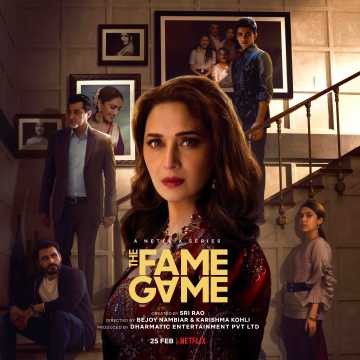 Both her children, son Avinash (Lakshvir Singh Saran) and daughter Amara (Muskkaan Jaferi), have identity issues stemming, in part, from being raised by a famous mother, though Anamika is warm, understanding and always makes it a point to be there for her children.

Her marriage, however, is strained, and when she reunites with old flame and former co-star Manish Khanna (Manav Kaul) after over 20 years for her home production, Anamika yearns for something more. The Fame Game, co-directed by Bejoy Nambiar and Karishma Kohli, who direct alternate episodes, explores the idea of ‘Who is Anamika?’.

We learn about the star in warm-toned flashbacks, not always a reliable narrator, and the series returns to the present in a colder palette as her family and public are stressed about her disappearance. Trivedi’s leads unearth secrets, but she doesn’t really crack the case as she had hoped to.

Over eight episodes, the facade of Anamika’s perfect life and career is pulled apart and certain suspects are introduced to be possibly involved in her disappearance. One of them is Madhav (Gagan Arora), an unhinged fan who desires to be close to the star. But Anamika’s family is hiding plenty of secrets from their past, some of which can possibly help in finding her.

Like Anamika, Dixit too made her debut in cinema at an early age and ruled the big screen for a long time. But the fictional star has no real agency to her life and comes to realize there is no one she can trust. The veteran actress makes her digital debut with The Fame Game and the lavish production, from executive producer Karan Johar, pulls out all the stops to showcase Dixit’s best qualities.

The series is tailored to fit around Dixit’s real-life celebrity status and some of Anamika’s film scenes are actually scenes from the actress’s own films. As Anamika, we see all aspects of Dixit — she sings, dances and brings us into her gilded cage. She is as much at ease in the scenes comforting her children as confronting her mother about her continual machinations. Dixit is surrounded by a solid cast in Kapoor, Mulay and Kaul, who are the key constants in her life.

Young artistes Saran and Jaferi draw out the complexities of their characters adroitly. The seemingly aimless Avi is holding on to heavy internal issues and Saran does a good job of handling his turmoil. Meanwhile, the insecure Amara craves the limelight even more than her mother despises it. “Fame is not glamorous. Fame is dangerous,” Anamika warns her. 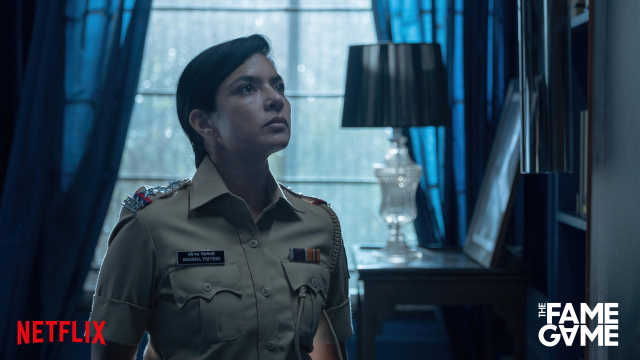 The no-nonsense Trivedi, who happens to be in a same-sex relationship, is dismissive of Anamika and her way of life, but the series points out how they both continuously face misogyny and discrimination in their careers.

But the writing asks the audience to constantly suspend disbelief about certain plotlines and characters. A key supporting character’s murder is sidelined and the search for his killer is never addressed. Moreover, the screenplay delves into several clichés as it examines fame, glamour and the film industry.

The search for Anamika grows endless, especially as the investigation drags on. But the rich production, with a solid cast and able direction, keeps you interested and hooked for a possible second season.

The Fame Game is now available on Netflix.