The Confession review: Interesting take on the COVID-19 pandemic and its victims

Priyam Chanda’s quarantine short film, The Confession reveals the identity of the confessor right at the end. The film comprises of two scenes with two dominant frames that separate the segments of the narrative. The confession here is made through a narrator’s monologue.

The narrator (Sushovan Dasgupta), sits with his face in the dark and the frame continues to zoom, as he goes on with his monologue. He introduces himself as the confessor, who has travelled all over the globe after beginning his journey from a small town. He gives the impression of being an experienced man with empathy for people; a man who has stood by people in the most difficult of times, especially during their time of death. He cannot live without being in the midst of people.

The lockdown declared around the world because of the COVID-19 pandemic has made it immensely difficult for him to survive. The deserted face of the earth has put him in an acute state of despair. 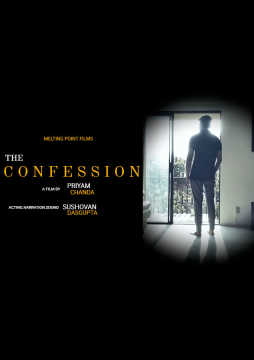 Making the confession becomes important for him as the end of his journey is not likely to be on his own terms. At this point, the transition of the frame as well as the narrative takes place as he looks at the flattening curve of COVID-19.

The idea of not revealing his face in the first frame goes well with the twist that is delivered in the second. In it, a figure stands at a distance with his back to the camera, facing a surreal light coming from outside. It is interesting, the manner in which Chanda delivers an effect of salvation for the confessor with this particular frame.

The climax is bound to send the audience back to the narrative of the first frame and establish a logical connection between the two. All through the film, they may have been considering the confessor to be a victim of COVID-19.

In a statement from the narrative of the first frame, “an effort of a small town,” also raises questions regarding Chanda’s perspective on COVID-19, on whether he believes the disease to be man made. Towards the climax, he speaks of the unity of human beings all around the world, going beyond the conflict between science and religion. His belief that human unity can defeat the deadly virus is apparent here.

Dasgupta’s sound design also helps maintain the ethereal ambience of the film. As the film ends, the audience may well develop a new perspective on the relationsip between the pandemic and its victims.

Watch the film below.