Thambi is the kind of family drama that has all the popular tropes associated with the genre but still manages to impress because it surprises audiences.

Thambi is the kind of family drama that has all the popular tropes associated with the genre but still manages to impress because it surprises audiences. Cut from the same cloth as Jeethu Joseph’s Malayaam film Drishyam (2013), Karthi and Jyothika-starrer Thambi (2019) is your quintessential family drama that’s elevated some solid twists and rewarding finale.

Both Thambi and Drishyam are centered on the search for a missing member of a family and the secrets that are unraveled in the process. In spite of having so much in common, both these films stand out due to the way they’re executed.

Thambi is the story of a family that’s eagerly awaiting the return of their long forgotten son and brother. It’s been 15 years since Saravana (Karthi) left home and nobody knows even if he’s alive. But his sister Parvathi is still hopeful that her brother would come home someday, and so is the rest of the family. Some circumstances force Saravana to flee town and he comes and takes refuge with this family, introducing himself as their long separated kin.

While Saravana’s parents are convinced that their son is back and they welcome him wholeheartedly, his sister has her own doubts and takes a lot of time to warm up to him. As Saravana slowly starts winning the trust of his family members, he learns about a secret the family has hidden for a long time and the events that follow forms the crux of the story. 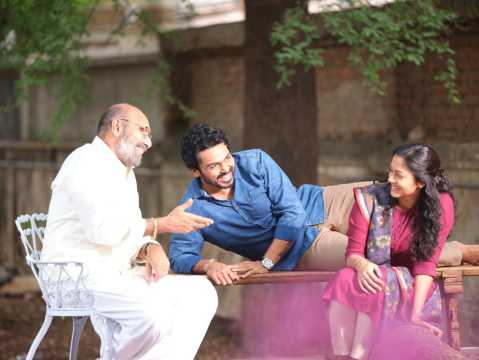 Just like the family in Drishyam, the one in Thambi has secrets of its own. At some juncture in the film, each character becomes a suspect and that’s what makes the film an exciting watch, in spite of the slightly comical route it takes in the beginning. Unlike Drishyam which was considered slightly dark in its overall tone, Thambi is a light-hearted family drama with a rewarding twist in the end.

After doing heavy-duty action in Kaithi, it’s refreshing to see Karthi play a laid-back character with ample scope for comedy in the first half. He nails the comic portion and also plays the emotional part equally well, delivering a matured performance. Jyothika shines in one of her best outings since her return to acting, and she plays her character quite effectively. But it’s Sathyaraj who steals the show with another seasoned performance.

Thambi could’ve been slightly shorter but the film marks up for the length with a cracker of a finale. All credit to the writers and Jeethu Joseph for making this film work in spite of the Drishyam hangover.