The film is overtly simplistic and predictable without any twists.

Teko by Abhimanyu Mukherjee makes you laugh at times because sometimes you tend to laugh at the worst jokes also. The director probably intended to spread message against various alluring commercials that tend to mislead public in general and reap profits. However, he ends up presenting an amateur film, that lacks logic at times and turns regressive too.

It is a surprise to see Ritwick Chakraborty, an actor par excellence, choosing a script, which requires him to deliver a series of jokes every now and then, rather than sensible dialogues packed with humour. As it is the entire film simply seems like a playful attempt, with no such solid content; moreover, Chakraborty’s frivolous take on the character, makes it a worse experience.

Alokesh (Ritwick Chakraborty) is obsessed with hairstyles and checks whether his hair is properly placed or not in every mirror he comes across. He doesn’t hesitate in taking selfies with random women with long hair and also asks his mother to choose a bride for him with long hair. 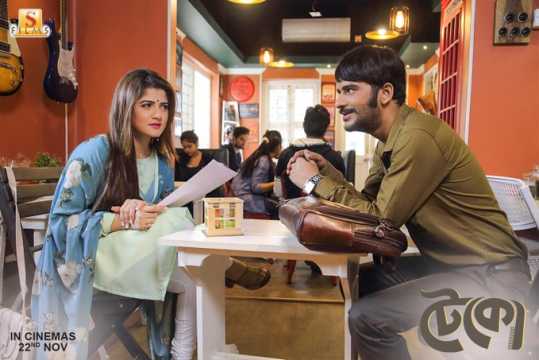 Soon his mother succeeds in finding a prospective bride of Alokesh’s choice. Meena (Srabanti Chatterjee) too instantly likes Alokesh for his hairstyle and they start romancing too. Before they get married, Alokesh plans for their honeymoon too. Here, the episode of both trying make a baby before their marriage doesn’t evoke laughter, rather it appears ridiculous and nonsensical.

Alokesh’s life turns upside down and their romantic rendezvous takes a halt, when he starts losing his hair rapidly after using Byomkesh Oil, which he buys after watching a commercial on television. Meena calls off her marriage with him and feels betrayed too.

It is not clear till the end of the film, why Meena would feel betrayed because Alokesh lost most of his hair. This unnecessary incorporation robs the plot of logic even more.

Citing the example of the Kangana Ranaut-starrer Queen (2014), Alokesh declares going on a honeymoon all by himself, then the movie abandons the idea altogether. First, he plunges into depression. Soon, he gathers himself to file a case against the fraud company.

He repeatedly visits Meena, only to declare his pledge, while the latter continues to feel betrayed for no particular reason. Alokesh first fails in his attempt of seeking revenge, but eventually he contacts people, who, like him have been repeatedly betrayed by the same company and sets out on a mission to complete his pledge. 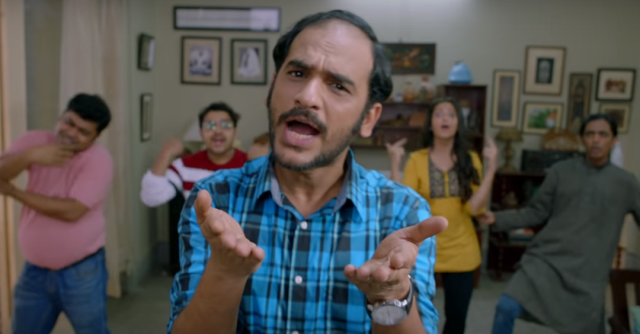 The film not only attempts to spread awareness against fraud commercials and products but also against fake astrologers, who loot people in the name of providing remedies for ill fortune. However, Mukherjee could have made the film a little more sensible by spreading awareness against socially constructed standards for physical beauty and various other prejudices.

In the first half, there are elements for laughter get exhausting as the plot proceeds. Mukherjee needs to understand that writing punchlines and humourous dialogues are probably two separate skills. The content is overtly simplistic and predictable without any twists. It appears as if one episode has been joine with the other just for the sake of lengthening a plot.

In the second half, sending fake products to Meena’s house, repeatedly to make her aware of Alokesh’s fight turns out to be nothing but pestering. As it is, Meena’s character lacks substance, the clichéd climax turns Teko regressive too.

Either Chakraborty should get into a bit of method acting or he should stop choosing random scripts. With his monotonous instinctive act, he fails to make the character of Alokesh interesting. If we analyse closely, Alokesh doesn't seem like a character that we commonly meet in our daily life. However, Chakraborty’s performance doesn’t bring out anything extraordinary about him.

Meena’s narrative is dragged from the beginning to end for the sake of a happy ending of the film. Souvik Basu’s cinematography is not outstanding, while Rabi Ranjan Maitra’s editing too doesn’t save the monotonous film, which, if you stop watching for few minutes in the middle, you don’t miss out anything.

One of the romantic compositions by Savvy Gupta and rendered by Timir Biswas is quite original and probably offers the only soothing moment in the film. However, the background score is too stereotypical.

Teko might be enjoyed by a section of the audience, who regularly switch on the television to hear some jokes while having dinner after an exhausting day. Apart from that, Teko offers nothing that the audience can take away after watching the film.