Ajay Devgn and Saif Ali Khan dominate the big-screen historical adventure, but it is the background score, visual effects and action sequences that mark its technical superiority.

The film begins with young Tanaji witnessing his father fighting and dying at the hands of Mughal 'outsiders' (who had occupied the land for over 100 years). That description aside, the story soon fast-forwards to the rise of Shivaji the king and the struggle to re-establish the 'bhagwa' (saffron flag) in India.

The plan falters when Jai Singh is despatched by Aurangzeb to force Shivaji to sign the Treaty of Purandar, handing over 23 forts over to the Mughals. One of them is Kondhana, at the heart of the Deccan empire.

The insult has to be avenged. When the king escapes from Agra, he plans a campaign to retake the fort. With his most trusted lieutenant preparing for his son's wedding, Shivaji (Sharad Kelkar) decides to take on the job himself. But Tanaji is not one to let go of a campaign, and decides to celebrate Kondhana first, then his son's marriage.

Om Raut and Prakash Kapadia weave a scintillating story that moves at a furious pace and is filled with emotional detail. The screenplay is detailed and builds on multiple characters, events and angles. Each one is smartly placed and always leading up to the one key event — the battle for the fort. The secret route, the scaling of the wall, the final battle are well crafted and keep you engaged throughout.

While Raut plays on the emotional weight of the story, there are also quite a few flaws with the film's treatment of its characters. Most of the female characters, by which we mean the two main ones played by Kajol and Neha Sharma, are simply foils. They have very limited roles apart from standing by the side of their husband or being a helpless captive of the villain.

That being said, there are a few male characters who go missing towards the end. Ajinkya Deo's Pisal starts out as a treacherous minister trying to take over the Maratha empire himself but simply vanishes after the interval.

That aside, the film constructs an entertaining perspective of a castle war that was considered crucial to regaining Shivaji's power. The film also uses the legend of the ghorpad (monitor lizard) quite cleverly, creating a new narrative twist to the legend of the creature being used to scale the castle walls.

But as far as historical epics go, the film is laced with a heavy undertone of machismo and uber nationalism. From the very obvious mention of saffron, there is also the sly insertion of Devgn's monologue to rouse a group of Marathas who are suffering under Mughal rule and cannot even say 'Shri Ram' at their funerals. Of course, the word Rajput is muted, for obvious reasons.

Narrative, though, cannot be the only standard against which a film is held up. Technically, Om Raut creates a wonderful entertainer that is action-packed and visually captivating. The scenes of battle are well choreographed, with the slow-motion technique used particularly well. There are enough wolf-whistle shots to satisfy the frontbenchers.

Keiko Nakahara's camerawork deserves praise for its detailing that gives those fight sequences a very 300 (2006) feel. The action sequences choreographed by the team of Ramazan Bulut-Tolga Degirmen-RP Yadav are spectacular, swift and brutal. They are also visually beautiful. The production design is exceptional and epic in scale. The shots of the sheer cliff, the very real castle constructions, and detailed props make for a more immersive experience. Back all this with a thumping score from Sachet Tandon and Parampara Thakur and you have a film that is rousing and emotionally powerful.

Saif Ali Khan's Udaybhan Rathod is a maniacal, but polished, character that is the perfect foil for the more serious Tanaji of Ajay Devgn. Khan plays Udaybhan with a mischievous abandon that is refreshing. The actor seems to enjoy getting into characters that are unpredictable and out of whack. He brings a different energy to the action sequences and adds a touch of much-needed humour to the scenes as well.

Ajay Devgn plays Tanaji with all the seriousness of a straight-laced soldier. The actor fits the role of a brave leader with ease. Raut and Kapadia also give him some grandstanding lines to add to the heavy action finish towards the end. While the actor's Marathi does feel a little practised, its limited use ensures that it does not affect the film. 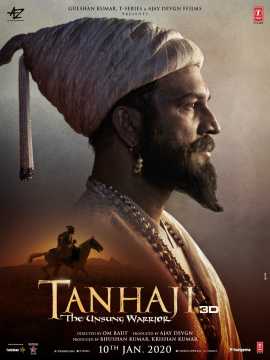 A special mention for Sharad Kelkar who, despite his limited screen time, captures the role of Shivaji Maharaj like no one else. While most actors play kings with a regality, machismo and pride, Kelkar brings a vulnerability to the role. The scene of his realisation that Tanaji will give up his life, despite the wedding, and the final moment is quite powerful.

Tanhaji:The Unsung Warrior is a ballad praising the warrior to high heavens. It might not be the most realistic work of history, but it has enough entertainment, hero moments, and a fascinating villain to make it worth your time.