Directed by Ajitpal Singh and created by Harman Wadala, the web-series stands out for its complexity, sophistication and quality performances.

There is something inherently Shakespearean about the way events transpire in the universe of Tabbar. Created by Harman Wadala, who wrote the screenplay along with Sandeep Jain and one Mr Roy, the web-series explores the nature of family ties and the crimes they can trigger. This entertaining series is intensely dramatic and thrilling and boasts of a solid script and talented cast which take the show to another level.

As the title suggests, the story is centred on the clan — 'tabbar' means family in Punjabi — of retired constable Omkar (Pavan Malhotra) in a small town in Punjab. His quiet life revolves around his wife Sargun (Supriya Pathak) and younger son Tegi (Sahil Mehta). The elder son Happy (Gagan Arora) returns from a vacation after passing a mock test before the IPS (Indian Police Service) exams and the family is celebrating with a quiet cake when all hell breaks loose.

Maheep (Rachit Bahal), the drug-running brother of rising politician Ajit Sodhi (Ranvir Shorey) gets killed. Faced with the options of covering up the incident or surrendering to his fate, Omkar and his family choose the former. With Sodhi and his right-hand man Multan (Ali Mughal) as well as Omkar's nephew Lucky (Paramvir Singh Cheema) sniffing around, the walls soon close in on the family. 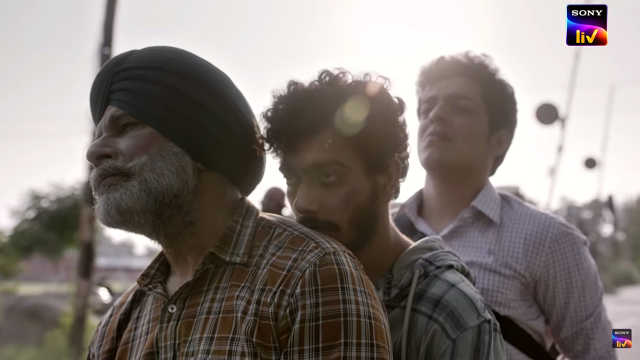 The writers weave a complex web of relationships, power structures and hierarchies. Each event necessitates making terrible choices for the characters, plunging them deeper into the depths of guilt and deceit. Microscopic attention has been paid to every detail, adding rich layers of storytelling, which emerge through the production design and camera work of Arun Kumar Pandey.

The high-calibre screenplay moves rapidly with twists, turns and tension galore. The narrative is fascinating and grips the viewer throughout while eschewing melodrama. The characters often move in tandem, as in a complex dance. Each is layered with a back story that is intricately stitched into those of others, leading to threads getting unravelled. A father protecting his family can also be a brother's murderer, a politician who helps an old woman can also be a ruthless killer.

Director Ajitpal Singh does well to allow each character to emerge through the complex graffiti of the story and leave a mark. The handling is careful, detailed and effective. There are moments when one wonders if people really act the way the characters do in the show. But these are moments of disbelief that need to be suspended to enjoy good fiction. By the end of it, the audience is forced to question their justifications.

There are some standouts in the acting department. Paramvir Singh Cheema plays the sincere cop who is unwittingly chasing the family of his own mentor. His eagerness, naivety and scepticism are well enacted. Also impressive are Sahil Mehta as the spoilt, dim-witted Tegi whose decisions almost always lead to calamity and Ali Mughal as the menacing and loyal Multan.

The leads perform impeccably. Malhotra as a man shouldering immense responsibility and guilt is arresting. The actor goes through a metamorphosis along with his character, which requires careful observation on the part of the viewer. The actor balances cunning and experience with the helplessness of a father impeccably. Supriya Pathak stands by him as an almost Shakespearean wife and mother in another fantastic performance. Arora delivers as the young man whose mistake triggered the chaos. Shorey makes a relatively brief appearance but exudes authority and menace every time he is on screen.

To top it off, everything is backed by a fantastic score by Sneha Khanwalkar, which heightens the sense of intrigue in each scene. The intelligent use of Baba Farid's couplets sung by Daler Mehndi and Rekha Bhardwaj as introductory markers for each episode is praiseworthy.

Ajitpal Singh does a great job balancing multiple elements. The web-series moves at an even pace without abandoning logic entirely. There are moments when the pace of the story drops, but it does not take anything away from the thrill. This compact series stands out for its complexity, sophistication and quality performances.

Tabbar is being streamed on SonyLIV.