Syeraa Narasimha Reddy takes an inspiring story from the past and presents it in the most popular, commercial and accessible format.

If there is one thing Surender Reddy’s Syeraa Narasimha Reddy (2019), a rousing period drama about Kurnool-based freedom fighter Uyyalawada Narasimha Reddy, gets right, it is giving Chiranjeevi the role of a lifetime, one that will stay with his fans for a long, long time.

It was never easy to point out one great character from Chiranjeevi's illustrious career of 151 films, but now one can blindly go with his terrific performance of a rebel with a cause in Syeraa Narasimha Reddy, which is only let down by its uneven writing.

Syeraa Narasimha Reddy is the story of one of India’s early rebels against the British. His was a tale that needed to be told for a long time. Co-writers, the Paruchuri brothers, along with director Surender Reddy, pay rich tribute to the unsung hero, and nobody else could have played Narasimha Reddy as fittingly as Chiranjeevi, who unleashes the kind of energy in a performance we haven’t seen before. In spite of the flaws in the film's writing, Chiranjeevi, through his majestic screen presence, elevates the story tenfold.

The film opens in 1857 when the soldiers of Rani Lakshmibai of Jhansi, down on their luck and outnumbered by the British East India Company's troops, are contemplating surrender. In order to awaken their hidden strength and make them fight with valour, the queen starts narrating the story of Uyyalawada Narasimha Reddy (Chiranjeevi) and how he fought the British and struck fear in their hearts, paving the way for the first war of India's independence. The rest of the story follows the rise and fall of Narasimha Reddy and the legacy he left. 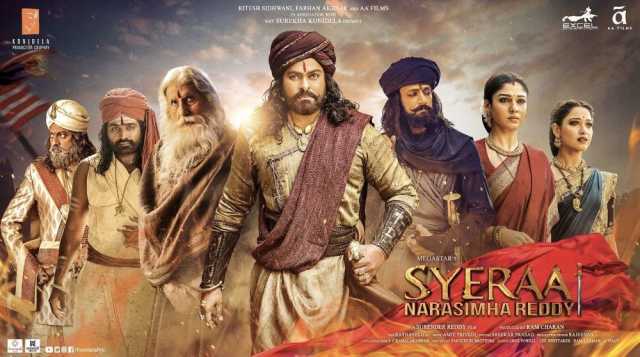 Syeraa Narasimha Reddy takes an inspiring story from the past and presents it in the most popular, commercial and accessible format. It’s debatable whether all of it works, but what certainly does is how it has been executed with the right amount of patriotism, machismo and a whole lot of Chiranjeevi star power.

The film does not disappoint the audience in terms of scale or living up to the hype. While Syeraa Narasimha Reddy is no Baahubali, it is still a film that accomplishes a lot more than anyone could have imagined, and a lot of credit for that must go to Chiranjeevi, who makes us overlook the weaker areas with an unforgettable performance.

On paper, Syeraa Narasimha Reddy could be the second biggest Telugu epic film after the Baahubali films. However, it is no match for the SS Rajamouli directorial ventures in terms of scale and execution. The film definitely looks grand and cinematographer R Rathnavelu’s visuals are breathtaking, but it is the weak writing that doesn’t quite make it epic enough.

On the action front, the film’s tone is inconsistent, maybe because multiple action choreographers worked on the project and their styles clashed. A pre-interval action sequence stands out and is easily one of the best scenes of the film.

When it comes to the performances, Tamannaah Bhatia as Lakshmi deserves to walk away with more laurels than the rest of the supporting cast. Sudeep and Vijay Sethupathi get meaty parts and play their characters to the tee. Nayanthara’s role per se may not be greatly written but it serves a strong purpose in the bigger scheme of things. Amitabh Bachchan’s role needed to be more effective, but it still works.

With its simplistic yet spellbinding storytelling, the film is populated by memorable and lifelike...

It’s an ordeal to sit through the film, which makes a mockery of the process of setting up a...

Expiry Date review: Intriguing thriller keeps you on the edge of your seat

Barring his accent, Tony Luke delivers a solid performance in this 10-episode series about jealousy,...