Suttu Pidikka Utharavu, which is haphazardly put together and definitely needed a better writer, is one of those films that work solely due to the twist, and thank God for its crisp running time.

Suttu Pidikka Utharavu, from director Ramprakash Rayappa, isn’t without its share of flaws, but these can be easily overlooked because it keeps you interested and invested.

It’s a heist thriller – events that follow a bank robbery - that for a major part of its running time keeps us hooked, and makes us really a part of the chase that’s competently staged and choreographed, in spite of lack of finesse in overall presentation. There’s so much happening – at breakneck speed - in the film that it hardly gives audience the time to catch a breath, and it only makes sense when the big twist is revealed.

The film opens with a bank robbery. It doesn’t even waste a minute to introduce us to the four robbers and we only learn about them as the story progresses and understand the motive behind the heist. Minutes after the robbery, police officer Ibrahim (Mysskin) takes charge of the case and he quickly assembles his team and puts them behind the robbers. 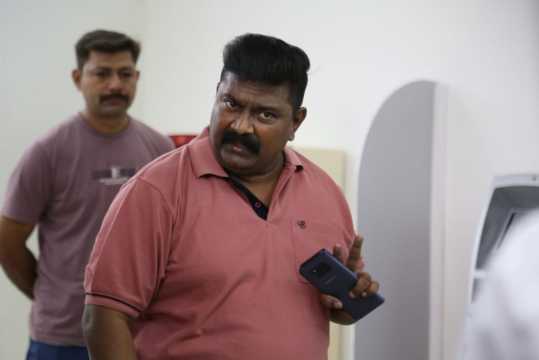 Even before they could exit the mall, the robbers are surrounded by police, but they manage to escape in a car and a chase ensues that brings them to a nearby housing board where the robbers take refuge. Police surround the slum board from all sides and don’t let anybody in or out.

Half hour into the film, a team of snipers are brought into action and one starts to wonder how is that even possible when it’s just robbers that are being dealt with. As the action ensues and the chase for the robbers continues, the film introduces a sub-plot featuring a group of terrorists – hiding in the same housing board – who are planning a bomb blast.

There’s another sub-plot about two reporters from a local channel who find themselves in the same neighborhood and get drawn by the action as they film everything for television rating points (TRP). At one point, you lose track of what’s actually happening in the film because there’s so much to follow.

Suttu Pidikka Utharavu, which is haphazardly put together and definitely needed a better writer, is one of those films that work solely due to the twist, and thank God for its crisp running time.

It relies majorly on building expectations and eventually deceiving audiences with the big twist. The good thing about the twist is that it’s nearly impossible to guess because director Ramprakash Rayappa gives us hints which make sense only after you walk out of the cinema hall, but are never easy to spot.

There isn’t much to say about the performances except for Mysskin, who plays a cop who likes to do things his way. This is the third time his slightly over-the-top performance has done justice to his character and nobody could’ve made his role more entertaining.

Vikranth and Suseenthiran fit the bill comfortably. Jakes Bejoy’s background score is one of the highlights of this racy action thriller and his work really elevates the mood of the film.

Cinestaan Curates: B Selvi & Daughters is a heartening tale of self-affirmation and solidarity

Directed by Drishya, it was one of four short films created for the Her&Now film campaign to in...

Far from a devotional film, the Nayanthara-starrer is an out-and-out comedy that skirts controversy....

Soorarai Pottru review: An inspiring story of hope and triumph headlined by a phenomenal Suriya

Based on the life of captain GR Gopinath, the founder of Air Deccan, the film makes for a riveting...