Directed by Korok Murmu, the Hoichoi web-series is more about heartfelt moments than strong social commentary.

The Hoichoi web-series Sundarbaner Vidyasagar narrates the journey of Kinkar Karmakar (Riddhi Sen), who goes from being a loser in everyone's eyes to a saviour of widows. Set in humble locations in the Sunderbans, the series directed by Korok Murmu highlights the evils of administrative corruption in the name of development with a compact and relatable storyline by Arkadeep Nath.

A teenager from Jibanpur, Kinkar is called Vidyasagar by his family members because, according to them, he shares some connection with the renowned 18th century educator and social reformer. However, when his graduation results arrive, Kinkar’s disappointing score becomes an embarrassment for this family.

Unable to meet his father’s unrealistic expectations, Kinkar seeks advice from his tutor and confidant Bhuban-da on how to avoid causing further shame to his family. He eventually lands a job as a government volunteer in Kumirkhali village in the Sunderbans; the village is inhabited by widows.

When Kinkar sets out on his task to form the Sundaribahini, a team of widows to protect the mangroves in the area, he finds obstacles put in his path by Kalyani (Rupanjana Mitra), a schoolteacher-turned-adviser of the local panchayat (village council). Village chief Radharani Devi and her aide Makhan (Shankar Debnath), a former convict, are Kalyani’s primary accomplices who manipulate the widows and create the façade of their uplift with the hidden agenda of commodifying their misery for profit.

Threatened from all sides, when Kinkar loses all hope of proving himself to be capable and responsible, a desperate call for help from Parboti (Ushasi Ray), a widow who is able to see through the show of development put up by Kalyani and her sidekicks, fills Kinkar with the zeal to dedicate himself to the cause of exposing the corruption of the system. As advised by Bhuban-da, he vows to not let go of the opportunity to shine, when he is providentially appointed saviour of the widows, much like Ishwarchandra Vidyasagar. 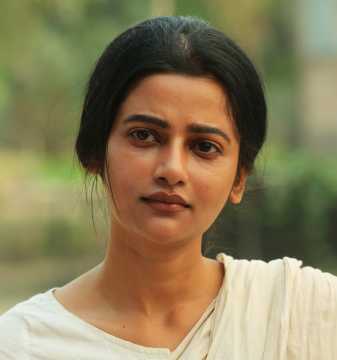 While the casting seems on point, the detailing in the moments not only adds to the authenticity of the storyline but also helps to build the character arcs without unnecessary frills.

Riddhi Sen adopts certain mannerisms to build the character of Kinkar, a young man who is unaware of his capabilities and is easily scared until he faces public humiliation for no reason and turns into the only ray of hope for Parboti. The actor brings out the transformation with natural ease while adding adequate drama in his moments of vulnerability.

Ushasi Ray, too, is a natural as the only indomitable fighter among the widows who have mostly surrendered to their fate of being at the mercy of government officials. Her innocence as well as fierce demeanour are refreshing.

Rupanjana Mitra and Shankar Debnath shine in their negative avatars, while the artistes who have played Hafiz Raza, Kinkar’s assistant Kalua and Radharani Devi also stand out with their performances.

Cinematographer Ramyadip Saha does not try to present the Sunderbans as an exotic location. Yet, his thoughtful angles make the mundane poetic. The sequences at night, especially the one in which Kinkar is first introduced to the widows of Kumirkhali as they perform an evening ritual with oil lamps, are some of the most stunning. Pronoy Dasgupta’s editing makes it hard to miss a single moment.

Murmu has excelled in retaining the simplicity in the storyline that is all about heartfelt moments more than strong social commentary. Arkadeep Nath's writing has made room for a moving performance by Sen, which will make your eyes moisten with its subtle sensitivity. Though there are ample elements of mainstream storytelling in Sunderbaner Vidyasagar, the makers as well as the cast have made sure to stay grounded in terms of presentation.

Directed by Arindam Sil, the film has complex characters but the screenplay is lacking in the...