Sufiyum Sujatayum review: A beautiful tale of forbidden love that works in patches

The film fails to keep the viewer invested in the story of forbidden love with no major conflict to shake up things and stir up a dialogue.

Sufiyum Sujatayum (2020), the first mainstream Malayalam film to be released on OTT (over-the-top) platform, is a story of forbidden love and redemption that hits quite a few right notes. The story of forbidden love, especially involving people from two religions is not new and several filmmakers have taken it up over the years.

Writer-director Naranipuzha Shanavas's film works beautifully as a musical, thanks to the soul-stirring work by M Jayachandran, but never quite leaves the intended impact as a tale of 'jihad love'. It fails to keep the viewer invested in the story of forbidden love with no major conflict to shake up things and stir up a dialogue. This story of a mute girl (Aditi Rao Hydari) from an upper caste Hindu family falling head over heels for a Sufi saint has its share of flaws, but stills manages to charm in its own way.

If not for M Jayachandran’s lilting music and cinematographer Anu Moothedath’s grand visuals, which create magic on screen, the film would've been an exhausting watch. Unfortunately, their efforts are let down by the bland writing. This is a story with a lot of potential but it merely scratches the surface when it comes to dealing with the subject of forbidden love. Wish the story explored the politics behind the ‘jihad love’. 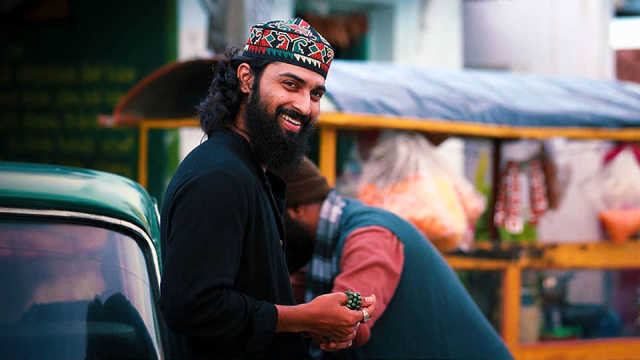 Even as a tale of romance, we aren’t quite blown away by the relationship built between Sujata and Sufi. Without building the romance, it’s quite difficult to believe that Sujata can’t get over Sufi even after a decade. We get that Sujata, who loves dancing, is charmed by the way Sufi sings and dances and smitten by his good looks but that’s enough to make her fall for him blindly and cling on to him for so many years? It just doesn’t make sense even though it’s portrayed as fairytale romance. I didn’t even mind the romance as much as I had problems with the ‘jihad love’ angle which never gets treated with the level seriousness it demanded.

Aditi Rao Hydari, in her comeback film to Malayalam cinema after a decade, does justice to the character of Sujata, a mute girl who has to deliver her emotions through her expressions and sign language. It’s her show all the way, and she makes a strong impression with a believable yet restrained performance.

Dev Mohan as the Sufi saint not just looks his part and plays it quite convincingly, but his character is underwritten. Wish some more time was invested in building the character arcs of both Sujata and Sufi. As the central characters on which the story is built, one wishes to spend more time with them to really understand what they feel for each other.

Jayasurya, in an extended cameo, as Sujata’s husband initially comes across as someone who is insecure about his wife’s past but his character gets some weightage when he allows Sujata to get some closure with her past.

Geethu Mohandas transports you from a beautiful coastal town in Lakshadweep to dingy rooms and...

Cinestaan Curates: Vujá Dé melds together time, reality in the realm of dreams

The experimental short film by Joby Varghese is an exploration of love and relationships viewed...