Sonejuhi Sinha’s directorial debut in feature filmmaking has a distinctive style and flair but still leaves you cold at the end of the day.

Far too many films have shown America as the promised land for immigrants. Sonejuhi Sinha’s directorial debut displays the uglier sides of the so-called American dream, where immigrants are often at the mercy of their employers and have little option in enjoying their new life.

Riz, played by Geetanjali Thapa, arrives in America after paying some smugglers to begin work as a maid in a dreary motel owned by another stern immigrant Una (Cynthia Nixon). Unbeknownst to Riz, Una wastes no time shredding her passport, effectively trapping her in bondage.

The bewildered Riz is also paired with a crass, crabby roommate Dallas (Olivia DeJonge) who informs her of the lay of the land. She snatches away Riz’s belongings, letting her know that she can only have them back once she steals something of value from the rest of the guests at the motel.

At first, Riz resists, but eventually she caves in, stealing a large stash of drugs from the lecherous Sal (Samrat Chakrabarti). Dallas is overjoyed, thinking she underestimated Riz. She plots with Una’s criminal son Jimmy (Robert Aramayo) to sell the drugs and make a new life with the money saved.

Riz, who has hope for a fresh start in the country, falls deeper and deeper into the messy lives of Dallas and Jimmy. At first, one might look at Riz as the victim, but despite Thapa’s guileless face, Riz is not as innocent as she appears.

But try as she might, she can’t escape a life of crime. The two women, who are poles apart, begin to plan a way out of their miserable existence, after planning to take a cut from a job stealing prescription pills from a school with Jimmy. Now bonded, the two ‘stray dolls’ are on a path to certain destruction. 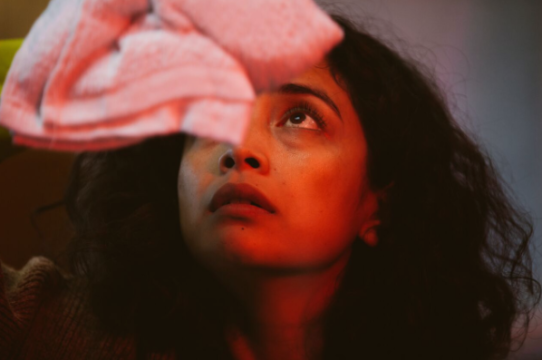 Sinha’s film, set in a motel at Poughkeepsie, New York, is both atmospheric and moody. The setting is gloomy and bleak, emphasized largely by cinematographer Shane Sigler’s lighting of dominant colours like blues, greens, and reds, which cover characters in the dark of the night. The music for the film is composed by Gingger Shankar.

Besides Thapa's Riz, the rest of the characters seem to be acting upon impulse. Riz, too, makes drastic decisions, but only when she is left with no choice. DeJonge’s wily Dallas is too fixated on getting out of the motel to pay attention to the murder and mayhem she puts into play by asking Riz to steal the drugs the first time around.

Thapa's performance is both layered and vulnerable, mostly when she speaks to her family back home in Nepali. She lies about her life in America and dreams of one day visiting the Niagara Falls. Her strong performance grounds the film.

Nixon, whose Russian accent seems off, seems miscast as Una. DeJonge brings out Dallas’s spoilt and selfish tendencies as she recruits Riz to her cause. Stray Dolls also echoes Ridley Scott's Thelma & Louise (1991) in that Riz and Dallas are left with no choice but to continue making bad decisions, to the inevitable end.

Sinha’s feature has a distinctive style and flair but still leaves you cold at the end of the day, making it hard to connect with the key characters.

Stray Dolls was screened in competition for the Best Narrative Feature award at the Kashish Mumbai International Queer Film Festival on 26 July 2020.

Annapurna: Goddess Of Food review – Forgotten history of the pioneering khanawalis of Mumbai

Directed by Paromita Vohra and T Jayashree, the 1995 short documentary shines a light on the Mahila...

The White Tiger review: Adarsh Gourav dominates this saga of a dog-eat-dog world

Ramin Bahrani has adapted the Aravind Adiga novel for the big screen capably, though the largely as...

Behind The Bhangra Boys review: Conquering hearts and spreading love through dance

The film highlights the honesty, candour and sheer determination of this group of five young to...