A shot fired in the dark is more likely than not to miss the target. But if it claims an innocent, there can be hell to pay.

Notorious bandits Man Singh (Manoj Bajpayee) and Lakhan (Sushant Singh Rajput) repent their action, but redemption was hardly an option for the self-styled baaghis, or rebels, of the Chambal.

In 2019, writer Sudip Sharma and director Abhishek Chaubey take you back to an era when the Chambal ravines were a frightening place, the lair of several feared gangs of bandits.

The principal characters are fictional and, like most films say in their disclaimers, any resemblance to real dacoits is purely coincidental. Bajpayee’s character shares his name with a feared dacoit of the 1940s and 1950s (and another one from the 1970s-1980s), but that’s where the similarity ends. Bajpayee had played the latter in Shekhar Kapur's Bandit Queen (1994). We do, however, get to see the Chambal’s best known bandit, Phoolan Devi, at the business end of the film.

Sonchiriya is reflective of the world that once existed in Central India. Poor economic conditions, caste and community divisions, a desire for revenge, and general greed led many to take to the gun.

Most of the gangs in the ravines were formed on caste lines. Sonchiriya (Golden Bird) has the Thakurs led by Man Singh baying for Gujjar blood. But one disastrous strike now has police officer Virender Singh Gujjar (Ashutosh Rana) bring the entire special task force to hunt the bandits down. Virender Singh also has a personal score to settle.

When the trailer was released, Bhumi Pednekar’s character drew comparisons with Phoolan Devi. But Indumati Tomar has a spine-chilling tale of her own. The woman is on the run with a 12-year-old who needs urgent hospitalization. Lakhan provides a helping hand but that comes at the cost of annoying a large section of his own gang. The hunter is now hunted by his own. 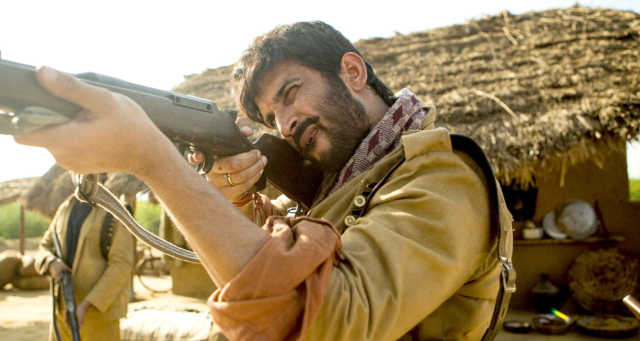 Director Abhishek Chaubey is a Vishal Bhardwaj protégé, having written the screenplay for films like Omkara (2006) and Kaminey (2009). He turned director with Ishqiya (2010), following it up with Dedh Ishqiya (2014) and the controversial Udta Punjab (2016).

Chaubey’s protagonists are flawed characters blessed with a sense of humour. Sonchiriya, though, is no dark comedy. It is a very serious film. The bandits have their banter, but the grim situation at hand and the dangerous setting leave no space for the Chaubey brand of humour. Perhaps that is why he left the screenplay and dialogues to Sudip Sharma.

The duo has chosen to set their film in the Emergency (1975-77) era. Phoolan Devi’s life as a bandit began after 1979. But Chaubey and Sharma take the creative liberty to establish her as a feared dacoit during the Emergency. Setting your film in this period shows two things — Emergency or not, the outlaws operated fearlessly, and the Emergency gave powers to the police to gun bandits down at will.

Gabbar Singh from Sholay (1975) is the most iconic bandit in film culture. With dacoit gangs mostly disbanded, cinema, too, has told fewer bandit tales than in the past. Tigmanshu Dhulia’s Paan Singh Tomar (2012) was the tale of a sportsman-turned-bandit. Bandit Queen (1994), Shekhar Kapur’s internationally acclaimed biopic of Phoolan Devi, was a brutal film.

Chaubey’s Sonchiriya hums a gripping tune of its own. Chaubey lays special emphasis on the dialect but doesn’t go overboard for that runs the risk of alienating a large section of the 'Bollywood' audience.

Keeping the technical aspects of the film aside, it is the measured performance by the entire cast that makes the story so believable. Save for Bajpayee, most of the artistes are playing bandits for the first time. For a notorious outlaw, Rajput does appear to be a mellow man. But it's a tragedy that awakens his conscience. While his fellow gang members keep chanting, ‘A rebel has to follow his faith,’ Lakhan counters by asking, 'Does a rebel really have a faith?' Rajput internalizes the emotions of Lakhan well. 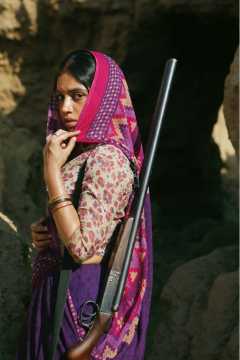 When it comes to playing the small-town North Indian girl, Bhumi Pednekar pretty much owns the space with stellar acts in films like Dum Laga Ke Haisha (2015), Toilet: Ek Prem Katha (2017) and Shubh Mangal Saavdhan (2017). Indumati, though, is a different kettle of fish. Never before has Pednekar played such an intense, emotionally gripping character. The lady is bruised but more than adept at handling the gun. It’s remarkable how when the bandits point their guns at her, she first wraps her pallu over her head, then points her gun back at them. Pednekar stands out as the powerful lady in Sonchiriya.

Ashutosh Rana, Bajpayee, Ranvir Shorey and Mahesh Balraj all chip in with commendable acts. Rising talent Jatin Sarna shows a different side to him than what we saw in Sacred Games (2018). We don’t know his name, but the child actor who plays Pednekar’s son is truly impressive.

The film drags a little after the interval but soon gets back on track. Chaubey’s Sonchiriya is not a brutal film. Its appeal lies in staying true to the core story, sticking to its soul. The cry of this Golden Bird ought to be heard.